Walk signals are shorter in Rainier Valley, but the city will improve them this year 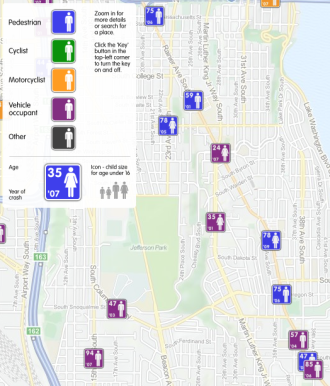 If you live in the Rainier Valley, many traffic signals in your neighborhood force you to walk faster than if you live in Ballard. Sometimes, you have to walk twice as fast to get across the street before traffic gets a green light.

A 2013 study by Seattle Neighborhood Greenways and the UW School of Public Health found that, while the time given to cross Rainier Ave is essentially the same as intersections in Ballard, the distance required to get from curb-to-curb is significantly longer. This means people have to move faster if they are going to make it across before cars come barreling down on them.

It should perhaps come as no surprise that between 2001 and 2009, three out of the five people killed while walking on the street were in their 70s. People with mobility issues or who simply move slower than others are put at disproportionate risk when the walk signal is too short.

The problem was illustrated well in a recent Seattle Times story:

For 68-year-old William Wingert, a man with self-described “bad legs,” making his way across Rainier Avenue South in Columbia City is a challenge.

Crossings at South Edmunds, South Hudson and South Ferdinand streets are problems for Wingert, who said they present two issues: It takes too long for the signal to turn for pedestrians, and the time given to cross is too short.

“As it is now, just about every time when I get across the street, especially if somebody is trying to turn left onto Rainier Avenue, I’m forced to either rush or stop and wait for them to get there and it’s hard to make the light,” Wingert said.

Rainier Ave also cuts through a part of Seattle where households are more likely to have lower incomes. This is injustice enforced by a City of Seattle traffic signal. 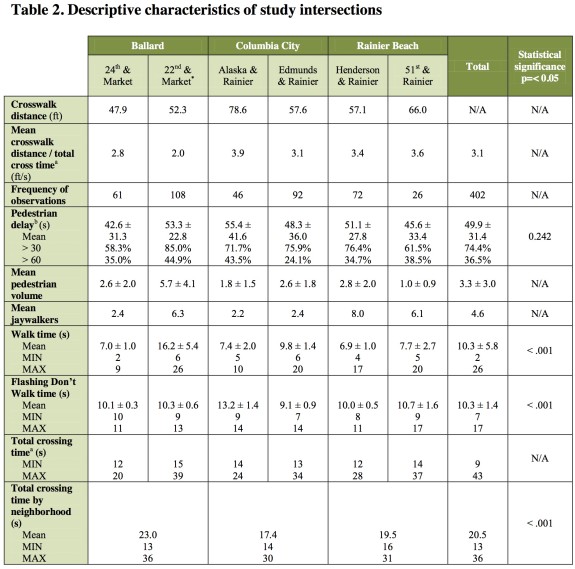 From the UW study

But the city has not ignored the study. SDOT is taking action this year with plans to retime 30 traffic signals on the street to both speed up transit and improve crossing times for people on foot, the Seattle Times reports.

“The signal retiming is balanced to have the shortest wait time for all users, while providing for the best traffic flow at the intersection,” SDOT Traffic Engineer Dongho Chang told the Times.

Howard Frumkin, Dean of the UW School of Public Health, lauded the city’s plan in a Letter to the Times saying, “we achieve health and safety not just in clinics, but in our environment — on our streets, in our homes and workplaces, in our air and water. This is public health.”

While many of the traffic signals on Rainer expect people to be able to walk 4 feet per second, the new national standard is 3.5. The city may set even lower speeds at some intersections.

But adding as much time to the walk signal as possible is only one way that the city can improve safety through retiming the lights. They can also change the signals to show a walk sign during every signal cycle rather than requiring people to push a “beg button” to trigger the sign.

I’m sure you have been in a situation where you arrive at an intersection on foot just as the light turns green. But the “Don’t Walk” is still red. You look around to see if there is a turn arrow or some other reason why you can’t walk before you figure out, “Oh, crap, it’s not going to give a walk sign because nobody pushed the button.”

Then you have to make a choice between waiting a whole signal cycle on the corner or making a dash for it. This does not need to happen. Lights that don’t give a walk signal unless someone pushed a beg button first are unacceptably dangerous and have no place in a city. The benefit for traffic flow is a couple seconds, but the added danger to people on foot is immense, especially those who move slowly.

If a push button triggers the walk sign sooner, that’s OK. But if it is required in order to get a walk sign at all, that’s not OK.

Another idea the city should make standard for traffic signals (especially in areas with many people on foot) is the “Leading Pedestrian Interval.” That wonky term simply means that the walk signal should be illuminated for a second or two before the light changes to green. This gives people a chance to get visibly and fully into the crosswalk before cars start turning. It’s a tiny change (again, a couple seconds) that makes a world of difference for both safety and comfort.

Seattle has a couple traffic signals that do this already. A good example is at 17th and Madison in front of the Capitol Hill Trader Joe’s (Melrose and Denny has an LPI as well, but that intersection is terrible for other reasons). Here’s a great StreetFilms video that explains how it works:

Traffic signal timing is a somewhat unsexy topic that has a huge effect on the safety and comfort of all users.

19 Responses to Walk signals are shorter in Rainier Valley, but the city will improve them this year