The NE 75th Street Road Safety Corridor project (PDF) has been a huge success by every possible measure. The street is safer for everyone, it’s more comfortable for everyone, and everyone is moving more efficiently.

When I say everyone, I mean everyone. According to a new city report, speeding is down 60 percent and high-end speeding (10 mph or more above the limit) has been nearly eliminated. Yet traffic is moving more smoothly at a consistent speed allowing the average person driving to move through the area in slightly less time than before the changes were implemented.

Making the street safer and adding bike lanes and a center turn lane made NE 75th Street more efficient. No longer does traffic get tied up behind someone trying to make a left turn, and the road screeches to a halt due to a traffic collision way less often than it used to.

And most importantly, fewer neighbors are getting seriously injured or killed. 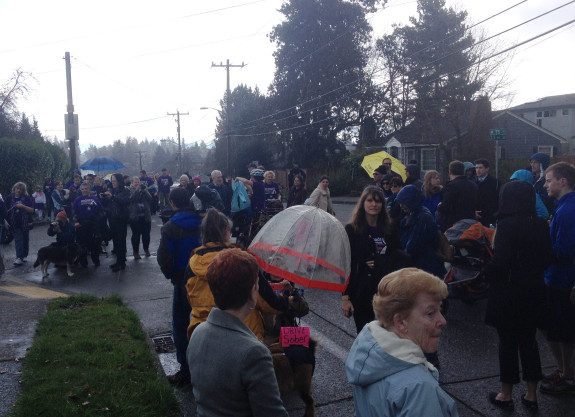 One year after the collision, people held a walk on NE 75th and vigil for those injured and killed. They also demanded safer streets. 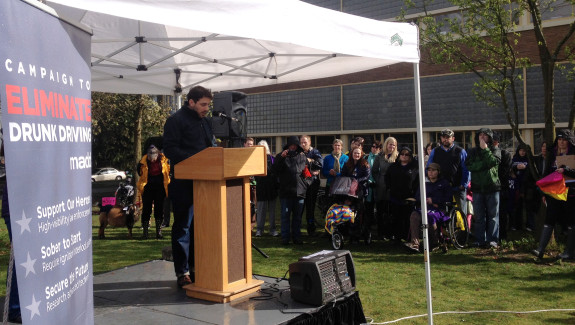 Dan Schulte bravely addressed the crowd to talk about the collision that killed his parents and injured his wife and son. 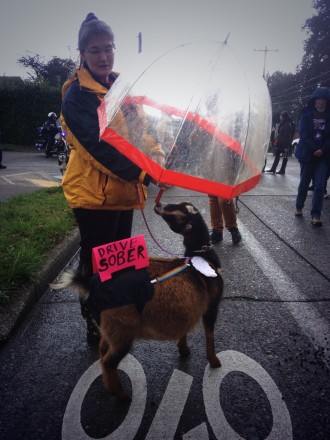 The Schultes had just visited a neighbor and pet this goat before Mullen struck them while they cross the street to head home.

We waited too long to implement this project. The impetus to make the changes came after one of the most devastating instances of traffic violence Seattle has seen in years. Mark Mullen, hammered and behind the wheel of a pickup that should have had an ignition lock system, ran down a family.

Judy and Dennis Schulte were killed. Their daughter-in-law Karina was seriously injured. So was their ten-day-old grandson Elias, who Karina was holding as they walked across the street.

It’s vital to remember that when we look at collision and traffic statistics, we’re talking about the lives of our neighbors, friends and family. The Schulte family deserved better, and we have to take action to prevent anything like that March 2013 collision from happening again. 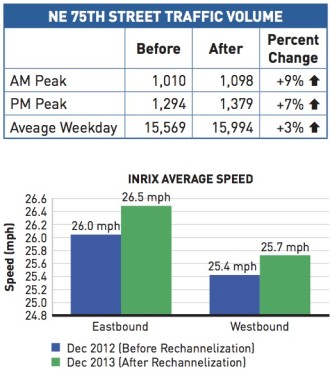 The project area spans a very busy section of NE 75th Street. At 21,300 average daily traffic counts, the section between 15th Ave NE and 25th Ave NE is busier than most Seattle streets. It’s even busier than most of the Rainier Ave sections the city is currently studying for a similar road safety project.

And contrary to concerns and what many people might assume, NE 75th now carries more traffic than it did before, and that traffic now experiences fewer delays. Speeding is down, but average speed is slightly up. Traffic counts (which include people biking) are up 3 percent over the course of a day and almost 10 percent during peak hours.

People are changing their habits and choosing NE 75th over other routes, perhaps because it is more comfortable now. Instead of gunning it to 36 mph or so, then slowing to a stop so someone can make a turn, then gunning it again, traffic moves at a more consistent and safer 26 mph through the whole area, saving time and stress in the end. Plus people who like to drive aggressively and weave between lanes can’t do that anymore, which is a good thing. 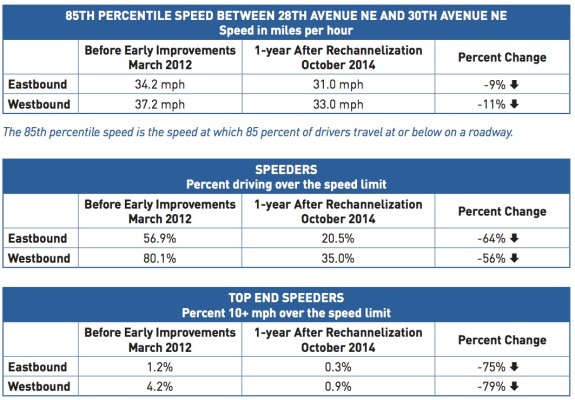 As was the case in previous road safety projects around the city, speeding dropped. But speeding on NE 75th Street did more than drop, it plummeted about 60 percent. And high end speeding (10 mph or more over the limit) was nearly eradicated.

NOTE: This chart can appear misleading at first. The raw numbers in the “early” column are 3 years, but “after” is only 1 year. However, the right column is fairly accurate because it averages the “early” counts

And as expected, collisions of all kinds went way down. Many collision types were eliminated, while others saw declines of 22 – 50 percent. These are people’s lives we’re talking about, so these results are powerful.

They’re so powerful, in fact, that the city should be looking to repeat this success on every dangerous street in the city if it wants to make a serious attempt at reaching Vision Zero. And that’s exactly what the city intends to do.

Mayor Ed Murray’s Move Seattle transportation levy and plan includes funding for 12 – 15 of these project on “all our high-crash streets.” If this plan makes it through the Council and voters approve the levy in November, Seattle really could make a legitimate run at being the first US city to achieve Vision Zero.

The city’s next (and perhaps biggest ever) road safety project challenge is underway right now. Rainier Ave has an even worse safety record than NE 75th did. It also has more foot traffic, more parking demand, more bus service and a higher demand for safe biking space. Rainier is definitely a more difficult project, but the safety benefits are potentially much higher as well. And after looking at this study, the NE 75th Street project should be a guiding light as the city develops designs to finally improve safety and comfort on Rainier Valley’s primary commercial street.