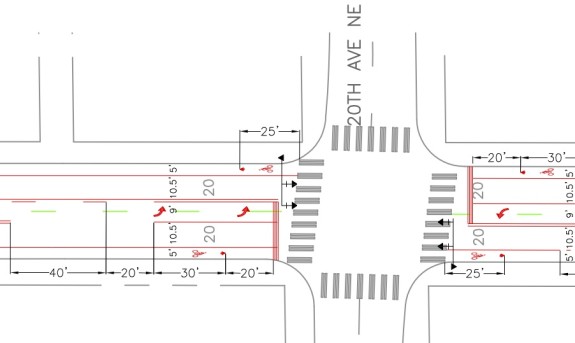 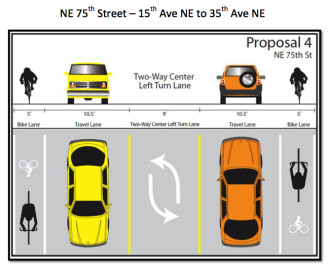 The city announced its plans for a safer NE 75th Street late last week, and hopes to complete work on the road safety project before school starts at nearby Eckstein Middle School September 4.

Since 2009, there have been 114 collisions reported in the one-mile section of NE 75th between 15th and 35th. One of those was so devastating that it prompted neighbors to mourning and to action. The state legislature even pushed through DUI law changes at the last minute of the session partly in response to the terrible March collision that killed Judy and Dennis Schulte and critically injured their daughter-in-law and infant grandchild, who are still fighting back to health.

The outrage and sorrow also spurred the city to action on the notoriously dangerous street. SDOT expedited a road safety project for a one-mile stretch of the street, holding several public meetings then coming back with a series of design options.

After public opinion clearly favored a design that would add a center turn lane and bike lanes, the city decided to move forward with the plan in the hopes of getting the new design painted before classes start at nearby Eckstein Middle School, less than six months after the tragic collision that spurred the project.

Here’s a recent email from Mayor Mike McGinn to neighbors of the project:

I would like to thank everyone who participated in the outreach process for the Northeast 75th Street Road Safety Corridor Project. We’ve received more than 300 letters and emails about the project, and more than 150 people attended public meetings to discuss potential changes to the roadway face-to-face with city staff.

After five public meetings, numerous on-site observations, and a review of traffic data, the Seattle Department of Transportation (SDOT) reached a final recommendation for the corridor, involving the following changes to Northeast 75th Street between 15th Avenue Northeast and 35th Avenue Northeast:

·         Providing one general purpose travel lane in each direction

·         Striping bicycle lanes in both directions

·         Removing on-street parking on Northeast 75th Street, except at Nathan Eckstein Middle School where parking will be maintained for school buses and general parking

SDOT will begin implementing these changes the week of August 26th. It is their goal to complete the new roadway striping complete in time for the start of the school year on September 4th.

The goal of this project is to create streets that operate safely and efficiently for everyone. Since 2009 there have been 114 collisions reported along this one mile long corridor. Data shows that speeding is a problem on the roadway and that collisions involving left turning vehicles are common. With this project SDOT believes that speeds will drop and the number of collisions will be reduced. SDOT will monitor the conditions closely after the project is complete and make operational changes if necessary.

I’ve been following this issue closely since the tragedy that took place in March. I have heard from the public, their feedback and concerns about safety at this location, shared those concerns and ideas with SDOT staff, and reviewed the designs SDOT has proposed. Based on the information provided to me in this process, I support the recommendation made by SDOT.

To view the project plans please visit www.seattle.gov/transportation/ne75th.htm. To see what the City is doing city-wide on road safety, see www.seattle.gov/besupersafe. If you have further questions or comments about this project, SDOT project manager Jim Curtin is available at 206-684-8874 or [email protected]. You can always contact me about this or any other issue as well.

Founder and Editor of Seattle Bike Blog.
View all posts by Tom Fucoloro →
This entry was posted in news and tagged ne 75th st, wedgwood. Bookmark the permalink.