Ravenna Blog: What’s the best NE 75th Street safe streets redesign option? (+ one of our own) 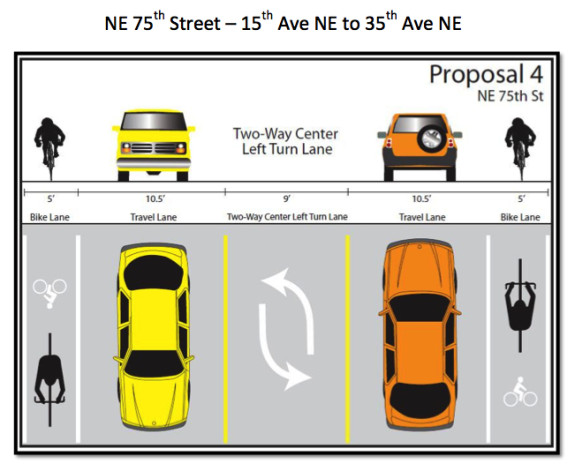 A redesign option that includes adding five-foot bike lanes and a center turn lane is pulling ahead as the clear favorite option according to a poll on Ravenna Blog. Seattle Traffic Engineer Dongho Chang also told media and residents that it is initially his favorite option, though he is waiting to hear from the public before making a final decision.

Because the changes would essentially only involve some paint, they can be implemented swiftly. In fact, the city hopes to have the changes in place before the start of classes at nearby Eckstein Middle School.

While the turn lane option (Proposal 4) is certainly this blog’s favorite option of those presented, we urge the city to try to add some extra bike lane width or buffer space (or better yet, something like those bollards SDOT’s been experimenting with) to the proposed bike lanes. Every bit counts when biking next to busy traffic.

It would also be great to see plans for median islands of some kind to help people walking or biking across the street at non-signalized intersections. While the proposed lane design would dramatically increase crossing safety compared to the road today, it’s still not good enough on its own for all-ages-and-abilities without a little extra protection at the crosswalks.

We would also like to suggest a fifth proposal if for no other reason than to push Seattle’s thinking away from simple painted bike lanes (far better than nothing, but not good enough for all-ages-and-abilities) and toward options with more protection.

People concerned about parking might also like this option, since it preserves some on-street parking. And since it is just paint (or maybe paint with plastic bollards), the costs for stretches between major intersections would not likely be much higher than the other proposed plans. The costs for major intersections (like 25th Ave NE), however, would likely be higher since a bike signal would probably be required to safely manage conflicts with turning cars.

For people walking across the street, once they have passed the bike lanes and parking strip, they have already crossed about half the road width. That means the crossing distance would be only half the distance to cross compared to today, a huge safety and comfort increase (not to mention people driving are far more likely to stop to let people cross under this sort of configuration).

There are few bus stops on the section of 75th under consideration, but they could be handled in Proposal 5 somewhat like this (admittedly, these bus islands are not likely to be cheap): 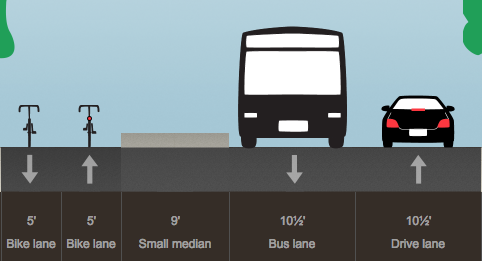 And if you have a location where a turn lane is needed due to high turning volumes, that can be included as well by doing something like this: 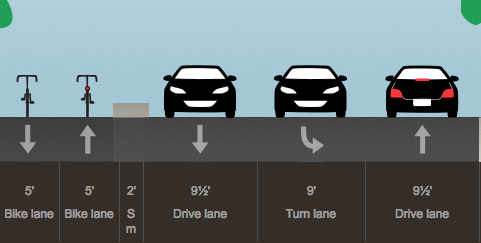 Basically, the city needs to figure out more ways to increase protection for the bike lanes on our busy streets. Major cycle tracks downtown or through a particularly complicated area of the city (dealing with highway on-ramps, bridges, etc) are likely to be expensive. And the city shouldn’t cut corners if it would make the street less safe.

But for neighborhood streets and less complicated sections of roadway, we need to be figuring out some cost-effective ways to build more miles of protected bike lanes that more people will feel safe using.

This entry was posted in news and tagged ne 75th st, ravenna blog. Bookmark the permalink.

39 Responses to Ravenna Blog: What’s the best NE 75th Street safe streets redesign option? (+ one of our own)