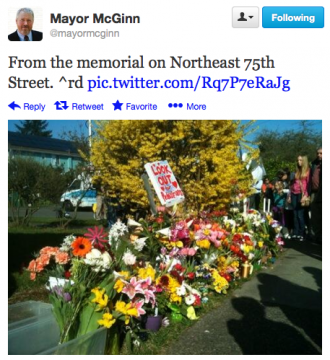 Hundreds of family, friends, city officials and community members took to the streets Monday, just a week since a devastating collision at 33rd Ave NE and NE 75th St took the lives of Judy and Dennis Schulte and sent Karina and Elias Ulriksen-Schulte to the hospital in critical condition.

People were there to memorialize those killed and support those still struggling in the hospital. They were also there to make sure no family has to go through this again.

To that end, Mayor Mike McGinn—who was among those at the community walk, which was organized by Seattle Neighborhood Greenways—announced a series of road safety changes in the area and said the city is looking at ways to improve DUI laws:

One week ago today, a Seattle family and a Seattle community were shattered by tragedy after an allegedly impaired driver collided with them as they were out enjoying a walk in their own neighborhood. We mourn the dead and wish for the speedy recovery of the survivors.

We have also heard from the community about concerns regarding road safety on Northeast 75th Street near Nathan Eckstein Middle School.

We are going to work with the community to look at physical changes to the design and layout of Northeast 75th Street to bring down speeds and make it safer for students and neighbors. Some changes were already in the planning process. But we will work with the community in the coming weeks to determine further specific design changes.

This collision has also raised good questions about our state’s DUI laws and their enforcement. We are taking a close look at ways to improve enforcement of DUI laws here in Seattle. We will also evaluate existing impaired driving laws to determine what improvements to make or to advocate for at the state level.

SDOT will be implementing the following improvements in 2013:

The Seattle Police Department will enforce traffic laws at this location, including:

• Use of the mobile speed van to monitor and cite speeders, in response to requests from the Eckstein school community

• Assignment of traffic officers to monitor that corridor (since January 16th)

You can also see the info sheet describing our work at this location.

We look forward to working with the community to make our streets safer. In August 2012 I launched a new road safety campaign titled “Be Super Safe,” which brings community partners together with the City to undertake education, enforcement, and engineering actions with the goal of zero serious injuries and fatalities on our streets. You can learn more about that campaign at http://www.seattle.gov/BeSuperSafe. In my State of the City address in February 2013, I also announced a new school road safety analysis and action plan that will look at ways to improve road safety near schools across Seattle. We will have more to announce on that program next week.

There will be another chance to discuss the incident today (Tuesday) at the Ravenna-Bryant Neighborhood Association community meeting at the Ravenna Eckstein Community Center’s gymnasium (7–9 p.m.).

For more from the walk, KIRO TV has a good report and the Seattle PI has some good photos.