We Can’t Wait, Part II: How Seattle’s bike plans got so lost, and how to get back on track

Yesterday in Part I, we reported on a protest at City Hall over the city’s delayed bike plans, especially downtown. In Part II, we look at how Seattle got so far off their bold safe streets path, and how the city can get back on track.

How did we get here? 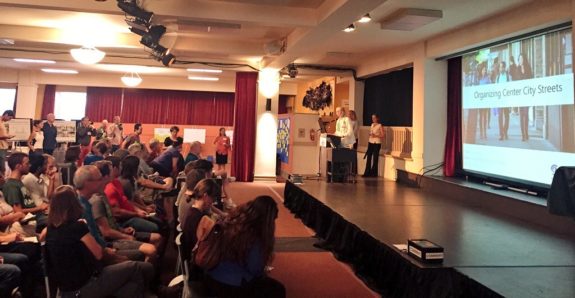 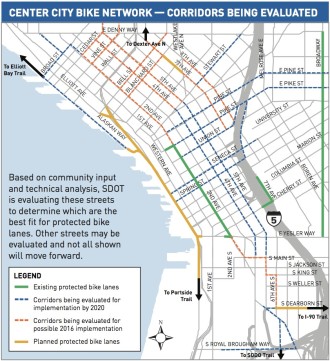 SDOT hosted an open house last July showing the concept and timeline for a network of downtown bike lanes they called the Center City Bike Network. Over 100 people attended, and from what I could tell everyone was in favor of the plan. In fact, the only consistent complaint I noted in my post afterwards was, “Why isn’t this moving faster?”

The open house showed a handful of corridors being considered for 2016 implementation, which at the time was already a frustrating delay for people hoping to have bike connections completed in 2015.

The corridors studied for 2016 included complete connections to both the north and south, SDOT just didn’t know which exact routes would be picket yet. The basic takeaway: Wait just one more year and the 2nd Ave bike lane will finally be connected, and pass Move Seattle if you want the rest of it to happen.

Now we are heading into summer 2016, and there are no plans for any of these corridors to be completed this year. The city passed Move Seattle, yet the bike plan is getting shorter, more fragmented and more delayed. Worse, city transportation leaders are acting as though no such promises were ever made.

“The 2015 plan reflects unstudied but [Bicycle Master Plan] prioritized corridors in CC from 2015 to 2019,” SDOT spokesperson Norm Mah wrote in an email to Next City’s Josh Cohen. “Based on evolving nature of the center city, SDOT did not make a commitment to having all the [Center City Bike Network] construction complete by 2020.”

That’s why people are protesting. To hold city leaders accountable and provide them the political support to make bold decisions that put safety above all other transportation priorities as leaders consistently claim.

When Mayor Ed Murray launched Vision Zero in early 2015, he made a commitment to put safety first and to take bold action to make Seattle’s streets so safe that nobody will be killed or seriously injured in traffic by 2030. And the people were behind him. Now as the effective boss of SDOT, he has to deliver. The first half of 2016 has been a dismal failure for safe streets progress. If he doesn’t turn this around, that City Hall protest energy from Tuesday will likely turn on him.

How to get back on track (and maybe save some lives, too)

Mayor Murray has demonstrated his ability to take bold, fast action on safe streets even for complicated projects. We saw this on 2nd Ave and even Rainier Ave.

The 2nd Ave pilot project was announced in May 2014 and open in October that same year. If he wants SDOT to complete basic 2nd Ave connections this year, he could make it happen. SDOT staff can handle it, they just need the order.

And direct SDOT to have them all be open by October.

Councilmembers Rob Johnson and Mike O’Brien urged SDOT during the committee meeting to consider using low-cost materials to get more bang for each buck and get bike lanes connected faster. Then the city can go back and make them permanent later when they get funding or when that street is repaved.

“I hear people say, ‘You built this beautiful chunk, but when I get to the end of it I don’t know where to go,’” O’Brien told SDOT staff during the committee meeting. Completing the connections is vital, and a partial bike lane that disappears can be worse than no bike lane at all.

Using low-cost materials also gives the city wiggle room to modify the bike lanes if needed in order to help move buses in 2018. So this work can occur in parallel with the Center City Mobility Plan instead of waiting two more months to start design work. As Councilmember Kshama Sawant pointed out during the meeting, people need safe streets and better transit.

“I don’t want resources for biking and transit to be pitted against each other,” she said. This is true both for funding resources and physical street space.

All the pieces are in place for Seattle to innovate and lead the rest of the nation. Sure, the rate of building construction in South Lake Union and downtown poses a problem for building a bike network. But the economic power behind that construction and growth is a big reason Seattle has the resources to innovate and create this fully-connected downtown bike network.

And biking is a big part of the solution to accommodating more jobs and residents in a finite amount of space. So the city cannot delay its bike plans to allow growth, because the city cannot grow if people drive to their new center city jobs and homes.

SDOT staff told the committee the department will develop rules for providing safe bike access during construction closures as they did recently for walking. In the meantime, they will “actively manage” construction along bike lanes, highlighting 9th Ave N as such a route. So the city is committing to build 9th Ave N on schedule this year, not delaying it until 2018 as was announced during a recent Bike Board meeting (another win from this recent public pressure, though we will need to keep an eye on this project).

As for my suggestion for the 2016 short term bike plan (“burn it and try again“), SDOT seems to be meeting half way. Staff said they would start working on the 2017 update in July when the Mobility Plan releases its bus movement analysis, just a few months after the 2016 plan was released.

This is good news. SDOT staff who made the 2016 plan are great, but they were forced to create it within absurd parameters:

As a closing note to the meeting, Councilmember O’Brien urged SDOT to communicate clearly about the status of safe streets projects. When the city releases a plan that slashes the city’s safe streets ambitions without any warning or clear explanation, people are going to feel misled, abandoned and angry. That’s exactly what happened with the 2016 short term plan.

“I think that’s our job as a city to not frustrate our allies,” O’Brien said.

The plans released in 2015 represented an ambitious, bold and innovative vision for safe streets and bike mobility in Seattle. That vision inspired people to work hard for the Move Seattle levy campaign, which passed despite internal polls showing it going down in flames (the ground game was likely a big part of the difference).

Was the 2015 plan over-ambitious and unrealistic? I’m not so sure. If SDOT staff had the green light to innovate and make it happen, I believe they could do it.

But the consequences of not even trying are horrible. Our neighbors, coworkers and loved ones are getting lifelong injuries or even killed just for trying to get around our city. We can end traffic violence, but only if we take action. Planning documents will never save lives unless we use them.

13 Responses to We Can’t Wait, Part II: How Seattle’s bike plans got so lost, and how to get back on track