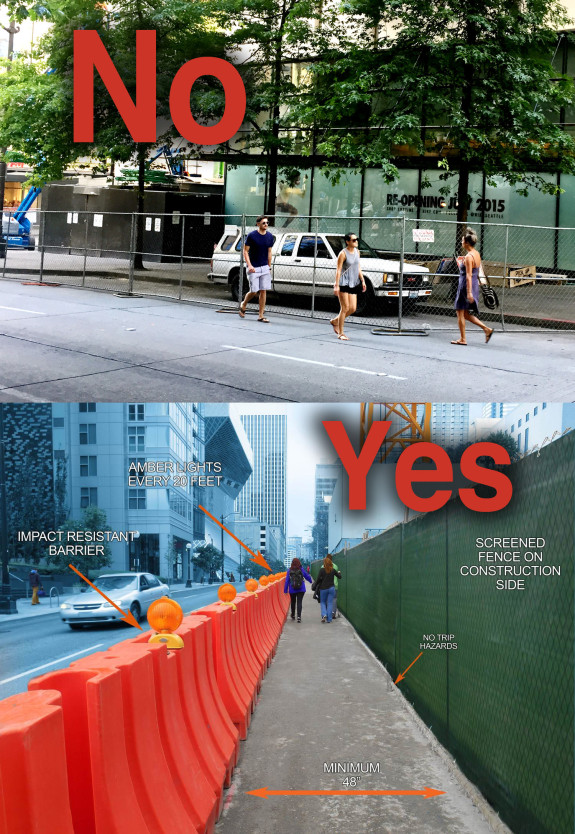 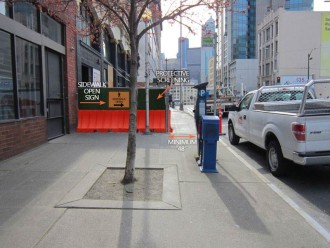 If you are building something in Seattle and need to close the sidewalk, you can no longer simply send people walking out into the street.

That’s according to new rules outlined by SDOT (PDF), which we wrote about previously. During public comment, the city received “overwhelmingly positive” feedback on the rule, which should significantly limit the number of “Sidewalk Closed” signs you encounter when walking around the city.

The rule also outlines the preferred way to build temporary walkways around construction sites, including attention to accessibility, lighting and barriers to protect people from both nearby traffic and the construction work.

The rule mentions that SDOT may consider bikes when evaluating reroute or detour plans, but more specifics about how to properly maintain safe bike access near construction sites will have to come from a different rule change altogether. This rule pertains to sidewalk use, but bikes are vehicles and need to be addressed in the “vehicles and traffic” rules.

But good news! SDOT says that because so many of you commented that bikes need to be considered, they will be looking at creating new bike-specific rules in 2016. So maybe — just maybe — your trip down Dexter won’t be so damn scary soon.

Specifics on the requirements are all in section 7 of the pedestrian mobility around work zones rule. New content addresses open walkways; scaffolding; corner work; reroutes; and detours. It also clarifies the difference between a reroute and a detour, with the latter being a last resort when no other option is safely feasible.

We’ll work with existing projects to help ensure safety and mobility for people walking in the area. The same applies for new 2016 construction that may be exempt depending on location, duration, hazards and the associated cost of compliance. Look for more specifics with the January implementation, including a Standard Operating Procedure document that will help address questions raised during outreach. In the meantime, if you see what looks like an unsafe work zone walkway, let us know with an email to [email protected].

A Director’s Rule interprets an existing Seattle Municipal Code (SMC) and this one ties directly to SMC Title 15 Street and Sidewalk Use. The Pedestrian mobility around work zones rule directly supports both Seattle’s Vision Zero for safer streets and the Access Seattle Initiative to maintain mobility in the city during peak construction periods.

SDOT DR 10-2015 revises and replaces the former Pedestrian Mobility Around Work Zones Director’s Rule (SDOT DR 1-2011). The updated rule, which is legally binding, is supported by a new progressive enforcement procedure that focuses on providing clear direction to reduce infractions, and heightened attention on those with cumulative violations.

For 2016 the creation of a Director’s Rule for bike mobility around work zones is up for discussion. This after much of the public comment during outreach asked that bikes be included in the rule that interprets SMC Title 15. Bicycles fall under SMC Title 11 Vehicles and Traffic.

Founder and Editor of Seattle Bike Blog.
View all posts by Tom Fucoloro →
This entry was posted in news and tagged construction, sdot, SDOT DR 10-2015. Bookmark the permalink.