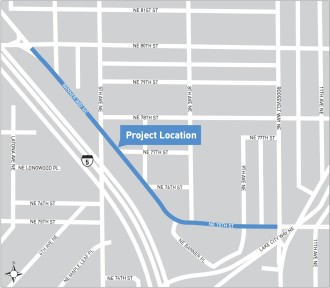 Building on the success of the NE 75th Street safety project, the city is heading west to improve safety on more of NE 75th Street and Banner Way NE.

Obviously the question you should be asking is: Why aren’t we extending these safety efforts in all directions? Well, you should take that question to the open house 5:30 – 7 p.m. tonight (Wednesday) at Fairview Church, 844 NE 78th St.

Looking at the map on the project page (posted above), the first obvious missing piece is the connection between Roosevelt and the end of the previous safety project at 15th Ave NE. It seems silly to look at the safety record of the 75th project and then decide to keep a couple-block gap of danger that looks like this: 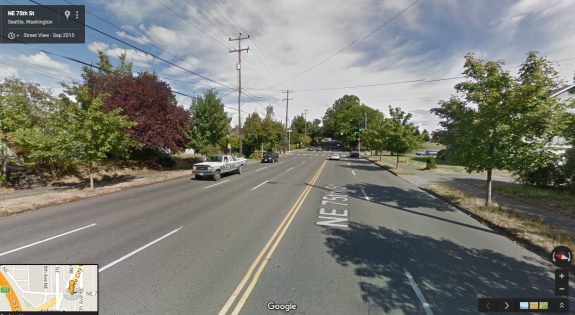 The scope of this safety project should connect to the previous safety project, making the whole corridor more predictable and consistent. And as you can see, there’s plenty of road space to work with.

And though the project is not specifically a bike project, bike lanes definitely need to be part of it. There is space for protected or at least buffered bike lanes for most or all of the project area.

The existing safety project included paint-only bike lanes, which function more as a traffic calming feature than as a bike route connection (though they are a great help for people who do need to bike on the street). But bike lanes are even more important on the section from 15th Ave NE heading west, making key connections between 12th Ave NE, Roosevelt, 5th Ave NE, neighborhood bike routes (like 4th Ave NE) and I-5 crossings at 5th Ave NE and NE 80th Street.

In other words, this one project has great potential to extend the safety benefits demonstrated on NE 75th Street while also making some major bike route connections.

There are certainly challenges, however. A fossil of the nation’s freeway craze, Lake City Way turns into a mini freeway passing under the street grid in this area. This creates strange traffic patterns and blocks off huge swaths of land. Streets (like 12th Ave NE) unexpectedly turn into freeway on-ramps, which is a particularly challenging for people biking and walking.

That makes the route under study that much more important: It’s the only option.

We put together this satellite map via Google. The solid blue line is the project scope shown on the city’s website. The dotted blue lines are opportunities for the project to do more. 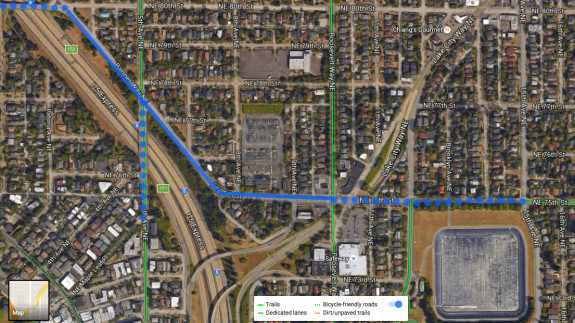 Following the collaborative work with the community for the NE 75th Street project, we’re continuing this work through Banner Way NE to implement the Pedestrian Master Plan and Bicycle Master Plan. We are committed to building a transportation infrastructure that supports a safe and vibrant community.

We’ll work with the community to consider changes to this street in an effort to bring down speeds and make the roadway safer for neighbors and all travelers, as part of our Vision Zero plan to end traffic deaths and serious injuries on Seattle’s streets by 2030.

Together, we will determine the specific nature and design elements of these changes through the process described below.  New safety measures may include, but not be limited to: signage improvements, arterial traffic calming, roadway design changes, traffic signal modifications, pavement repair, and safety enhancements for people walking and biking.

Since collision data tells us that the majority of collisions are caused by behavioral issues such as speeding, distraction, and impairment (driving under the influence of alcohol or drugs), we will pair roadway changes with new enforcement strategies and area-specific educational outreach.