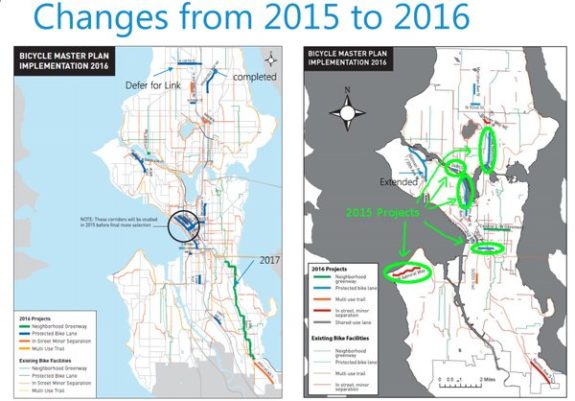 Slide from 5/17 SDOT presentation to Transpo Committee (PDF), modified by @NEGreenways to highlight projects delayed from 2015. Subtract them, and the 2016 plan is even more dismal

This moment right now was supposed to be the time Seattle finally took bold action on bike safety projects, taking our years of planning and making them real. The big electoral victory in November should have given the city both the political power and the funding to build a long-needed network of bike routes across the city, especially downtown. 2016 is not a big city election year — there are no City Council or mayoral campaigns to get in the way — so if there was ever a year set to revolutionize our streets, this is it.

But instead of coming out of the gates this year with a sense of urgency and a set of bold projects ready to hit the ground, Mayor Ed Murray and SDOT are poised to blow this golden opportunity completely. After accomplishing the hard part by demonstrating a protected bike lane through the heart of downtown, creating multiple plans — fueled by lots of difficult public debate — and winning votes to pass a huge transportation levy expansion that signs off on those plans and funds them, city leaders bailed.

Or at least they are trying to bail. But the people aren’t having it. After months of advocacy work behind the scenes falling flat and weeks of public outrage over the slashed bike plans largely ignored, it’s time to protest.

Cascade Bicycle Club and Seattle Neighborhood Greenways are organizing an afternoon of actions Tuesday, starting with “Take Your Bike to Lunch Day” at City Hall at noon, followed by showing up to the City Council Sustainability and Transportation Committee meeting at 2 p.m.

And while it’s not a “protest” exactly, Cascade is also hosting a “Hidden Gems” scavenger hunt downtown today (Monday), a fun event to explore downtown and help support downtown bike safety plans. There will be an after party at the Crocodile from 7–9 p.m.

More details on the Tuesday actions:

We passed the Bike Master Plan. We funded it with Move Seattle. Now we need you again to tell Seattle Council to stop the delays and get our safe bike network built now!

There are two opportunities this Tuesday to make your voice heard.

2) TESTIFY at CITY HALL
*What: RSVP to testify on Tuesday at 2 p.m. at the Seattle City Council Transportation Committee to let Council know we can’t wait for safe streets. Cascade will help you sign up to exercise your democratic rights to speak to our elected leaders. RSVP: http://action.cascade.org/p/salsa/event/common/public/?event_KEY=81434
*When: Tuesday, May 17 at 2 p.m. Arrive at 1:45 p.m. to get on the speaking list, meeting begins at 2 p.m.
*Where: Seattle City Hall – Council Chamber

These are not quite demonstrate-in-the-streets kinds of protests yet, and city leaders don’t need to let it get to that point. But there’s a strong movement for safe streets in Seattle that is too large to ignore and too activated to sit down and shut up while promised safety improvements are thrown away.

Safe streets project delays are a matter of life and death. As a series of terrible traffic collisions have shown us in the past week, we are desperately behind. Seattle can’t reach its goal of Vision Zero by 2030 by taking years off and saying we’ll fix it later.

SDOT is scheduled to present their slashed short-term bike plan 2 p.m. Tuesday at the City Council’s Sustainability and Transportation Committee at City Hall. Here’s a preview of what they will present: 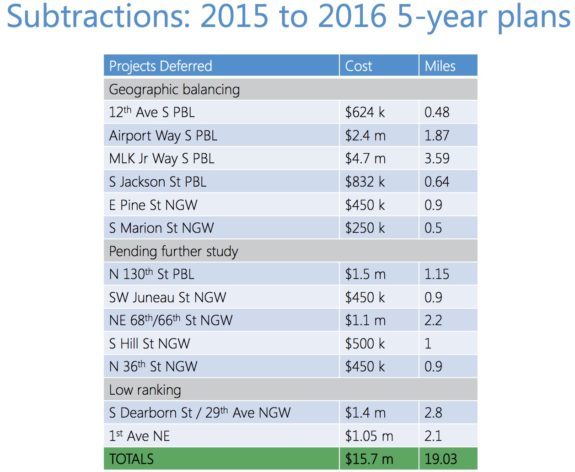 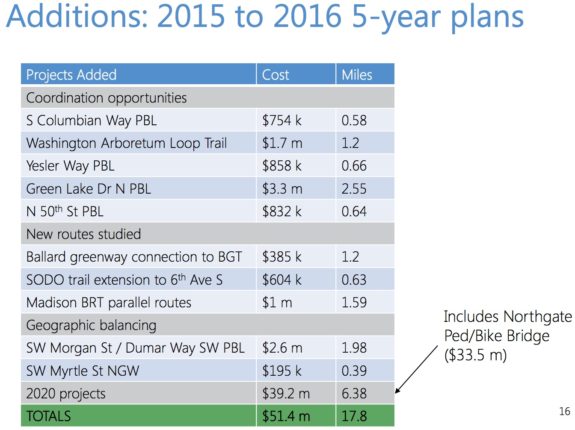 These tables appear to be comprised almost entirely of B.S.

The “subtractions” table does not include the downtown bike network that was deleted almost completely. This is the main point people are protesting right now, so it’s pretty insulting to not even acknowledge that they have been cut. My back-of-the-envelope math shows the deleted downtown bike lanes totaling 7+ miles.

Then they added a line for 2020 projects, which is sort of cheating since 2020 was not on the plan from last year that they are using for a comparison, and much of that Northgate funding boost comes from the state and Sound Transit. They also “added” the Arboretum Trail, which is a long-planned WSDOT-funded trail that hardly counts as an addition to SDOT’s work plan. Just because they forgot to include it in last year’s document doesn’t mean they get to pretend it is an “addition” to this year’s plan.

If you add back the 7+ miles of downtown cuts and ignore the Arboretum and 2020 “additions,” SDOT is subtracting 26 miles from the next four years, then adding 10 miles for a net reduction of 16 miles over the next four years. That’s a 20 percent reduction in miles from the five-year plan presented in spring 2015. But worse, most projects in that 20 percent are also the most needed improvements with the biggest potential impact on safety and mobility, like downtown.

This is not what Seattle voted for when the city approved Move Seattle. That’s why people are protesting. 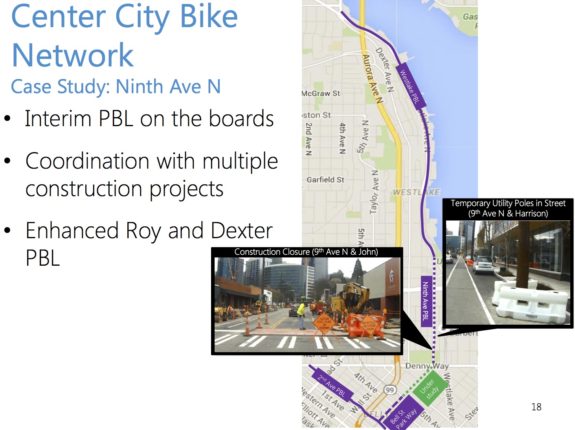 There was a pretty big backlash to news that one of the few scraps of downtown bike lane remaining in the plan — a 9th Ave N protected bike lane connecting the new Westlake bikeway to Bell Street at Denny Way — had since been cut in half. So SDOT will address that in the presentation.

The sticking point seems to be construction planned in coming years on 9th Ave. But that’s not a reason to push back the bike improvements, it’s a reason to protect them, especially on this street.

The slide above references “enhanced Roy and Dexter” bike lanes, but that’s not good enough. People’s natural instinct is to follow the most direct and flat route to where they are going. Most people simply will not bike four blocks out of the way up a hill to get around construction. They’re either going through the construction zone or trying their luck on Westlake Ave. It may look easy to draw lines a couple blocks over on a map, but in real life people aren’t going to follow it.

SDOT’s job is to protect people where they are going to be, not where SDOT wants them to be.

Which brings us back to the bigger point: We need a network of downtown bike lanes as they were planned a year ago. Because people are biking downtown today, and people are getting hurt and killed. And there is a huge number of people who want to bike downtown, but don’t feel safe.

So stop delaying and build the downtown network. You’ve run out of excuses, Seattle. It shouldn’t take more protests to get action from our leaders. And they certainly shouldn’t wait until more fathers, mothers and friends are killed or seriously injured. We have enough data points already:

Note: Map from last summer sadly already out of date