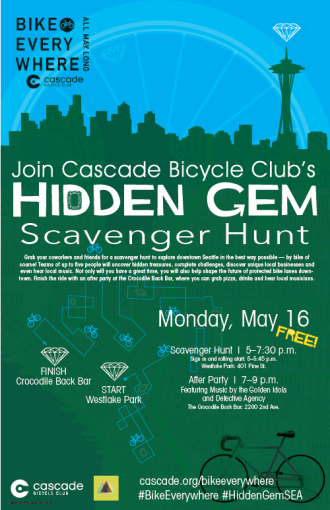 We’ve been writing a lot recently about Seattle’s delayed downtown bike lane plans in large part because it is the biggest employment center in the state and the single biggest missing piece in so many city-wide and regional bike routes.

But downtown is also its own unique and interesting place, packed with wonderful small business, works of public art and hidden public spaces.

In that vein, Cascade Bicycle Club is hosting a free after-work scavenger hunt May 16, sending people out to find downtown’s “hidden gems” before ending at the Crocodile for music and drinks (Full disclosure: My spouse Kelli is an organizer, and Cascade is a SBB sponsor).

Meet at Westlake Park for a rolling start between 5 and 5:45 p.m.

And since the event will mostly (entirely?) take place in the Pronto Cycle Share service area, you don’t even need to bring your own bike to participate. There aren’t too many bike events that can say that!

In addition to exploring downtown in a way you perhaps haven’t before, you will also help Cascade’s advocacy team collect data on preferred bike routes between various points. So this event could be a chance to take your frustration about the city’s downtown bike lane delays and channel it into fun.

The event also happens to be the evening before Seattle City Council’s Sustainability and Transportation Committee is scheduled to discuss the slashed short-term bike plan (2 p.m. May 17 at City Hall).

Uncover the unique art, businesses and music in downtown Seattle during Cascade Bicycle Club’s Hidden Gem Scavenger Hunt on Monday, May 16. The free event begins at Westlake Park (401 Pine St.) with a rolling start at 5 p.m. This event is a part of Cascade’s annual Bike Everywhere Month, a month-long celebration of pedal-powered movement.

Scavenger hunt participants will uncover hidden treasures, complete challenges and discover unique local Seattle businesses. This ride is a way to engage people in Cascade’s campaign for the swift implementation of the Center City Bike Network by highlighting the demand for safe, connected bike routes.

Additional information about the Hidden Gem Scavenger Hunt can be found at cascade.org/advocate/connect-seattle.