The city has announced the route for its longest neighborhood greenway yet. The Central Area Neighborhood Greenway clocks in around three miles, connecting from the I-90 Trail to Interlaken Park and traveling through the heart of the Central District, the Colman neighborhood, Miller Park and the eastern edge of Capitol Hill.

The city will work on specific design for the greenway over the next couple months with plans to start construction in June. If all goes according to schedule, it should be finished by December. UPDATE: Only the Jackson to John segment will be constructed in 2014, with the rest of the project coming in later phases.

Planners refer to it as a “hybrid” route because they were originally looking for a route either on the west or east side of busy 23rd Ave, which will be repaved over the next couple years.

However, since the intention of the project is to serve 23rd Ave destinations, a route that crosses 23rd Ave at Columbia was determined to be best. South of Garfield High School, the route will be on the east side of 23rd. North of Garfield, it will be on the west side.

Once completed, it will be possible to bike all the way from Interlaken Park to Georgetown utilizing the Central Area and Beacon Hill neighborhood greenways, which are connected by the I-90 Trail. That’s pretty cool. Here’s the route: 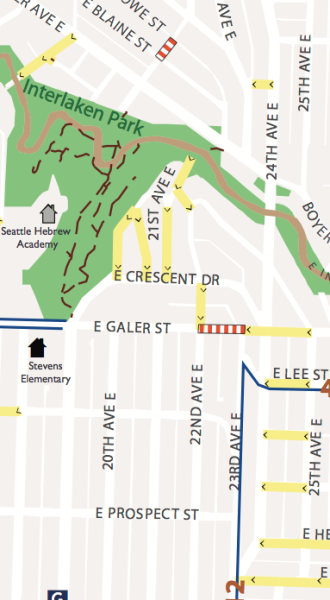 Yellow lines = 10% Grade or higher (too steep for many people)

And while hills are inevitable, not a single block along the route will be above a 10 percent grade (the point where many people might choose to dismount and walk).

However, Connecting into Montlake using side streets and trails will likely prove difficult or impossible without utilizing segments that are more than 10 percent grade, as the Seattle Walking Map shows to the right.

This is one reason why the city should build protected bike lanes on 24th Ave E either all the way to the Montlake Bridge or at least far enough to connect to the Lake Washington Loop bike route.

For more on our case for protected bike lanes on 24th, see our previous post.

Stay tuned for more coverage of planned neighborhood greenways across the city.