This is not a complete street.

Despite having a $45 million budget and being billed as a “complete streets” project, the city has proposed no safety improvements for the stretch of 24th and 23rd Avenues connecting the Montlake neighborhood to Capitol Hill and the Central District (north of Madison).

Instead, the current proposal — which project heads will present to the public in two upcoming meetings — includes four lanes, with curb lanes wider than lanes on many freeways: 14.5 feet. Wide lanes are proven to encourage speeding, a leading factor in traffic deaths and injuries. In fact, the city’s own Road Safety Summit Action Plan notes, “Reducing speeding can be accomplished by ensuring that our travel lanes are not overly wide” (page 20).

The city’s proposal is not a complete street and does not belong in any neighborhood, especially not one with so many people of various ages and abilities walking and biking.

You will have two chances coming up to hear from SDOT officials and give feedback on the project: A community meeting at 6 p.m. today (February 18) at the Miller Community Center and a project open house 5 p.m. February 26 at Thurgood Marshall Elementary.

You are needed at these meetings to speak up for walking and biking safety in Montlake, Capitol Hill, Miller Park, Madison Valley and the Central District. If you can’t make it to a meeting, email your thoughts to [email protected].

Outreach about this project has been rather confusing, so I will attempt to break it down into a couple easier-to-digest sections. 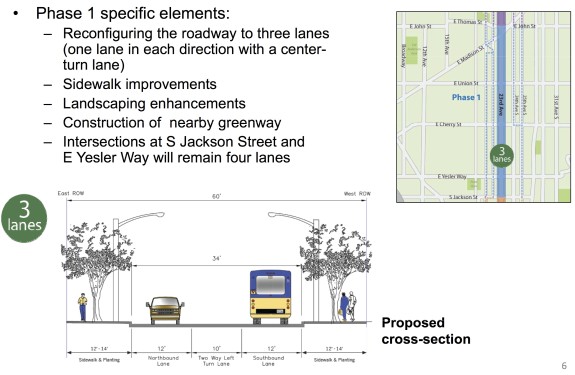 The first section of 23rd Ave to be constructed runs between E John Street and S Jackson Street. During early outreach, this was the only stretch discussed (Phases 2 and 3 were added to the project well after an open house last year, confusing people who attended that open house). This is the phase that requires the most immediate feedback, since it is approaching final design.

The sidewalks through this stretch are in dismal shape and are rather skinny. The road is also skinnier than other stretches of the street. So planners decided to widen and rebuild the sidewalks and convert the street to a safer three-lane configuration. While I pushed for a protected bike lane on 23rd, the planned design will increase safety and make it much more comfortable to cross this neighborhood barrier of a street.

I especially urge planners to include safety improvements for people crossing at non-signalized streets (median islands, curb bulbs, etc). Today, 23rd Ave is the neighborhood’s most dangerous street. This is the city’s chance to allow neighbors to walk across 23rd at every street, which would revolutionize walkability and bikeability in the Central District.

This is also a chance to improve transit efficiency by making sure buses stop in-lane so they are not delayed by people illegally passing as it tries to pull away from the curb (a violation so ubiquitous, it must be planned for).

The plan for Phase 2 (Jackson to Rainier) is roughly the same as Phase 1. 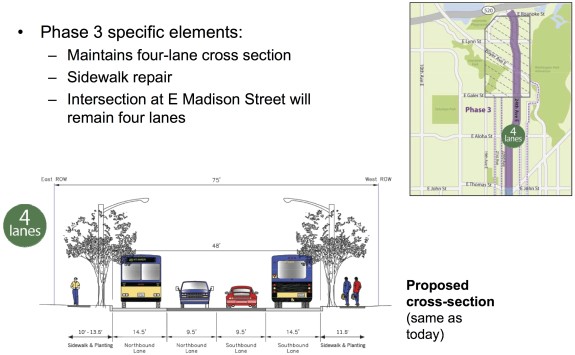 Unlike Phases 2 and 3, the city does not plan to improve safety for Phase 3 even though this northernmost segment has nearly identical daily traffic levels and has more road width than the other two phases.

Essentially, Phase 3 aims to preserve the highway-like feel the road has today. Unlike with Phase 1 — where planners presented a handful of options at an open house to study the pros and cons of each option and gather community feedback — Phase 3 has had no clear community outreach process.

Phase 3 also does not appear to have gone through a complete streets analysis (which it would surely fail). A city ordinance mandates that projects receiving significant investment consider the needs of all road users.

At a recent “drop-in session” about the projects, planners included this board to explain why they planned a design change for parts of 23rd: 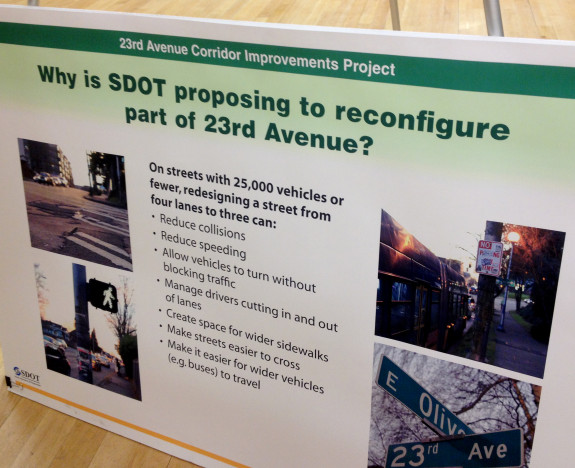 The city’s 2012 traffic counts show 24th Ave had 18,000 vehicles per day, only 500 more than 23rd Ave through the Central District and well below the 25,000 threshold where a redesign would begin to have some significant impact on traffic flow. The city’s board also lists a bunch of benefits of a safer street design: Fewer collisions, less speeding, less stressful turning, easier to cross the street, and on and on.

If a redesign is good for the Central District (which it is), why is it not good for Montlake, Madison Valley, Miller Park and the eastern edge of Capitol Hill?

When I asked SDOT what kind of complete streets process Phase 3 went through, they sent me an unfinished checklist that references improvements made in Phases 1 and 2 (the checklist was described as “a work in progress”). A safety improvement made in the Central District a mile up the road does not help people crossing the street in Montlake.

The good news is that Phase 3 has a long way to go, and there is time to change the design.

“While we’ve been fortunate to expand the scope to include improvements in Phase 3, it is the last phase of the project and therefore not as far advanced in both design and outreach as the other two phases,” said SDOT spokesperson Rick Sheridan in an email. 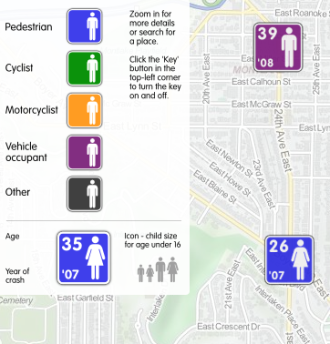 The bad news is that the city is already talking about Phase 3 as though the four-lane design is final.

This is our chance to reconnect neighborhoods long split by a very dangerous and wide street. Maintaining it as a neighborhood highway is not acceptable, but people will need to speak up to change the project’s direction.

Unlike many other city projects, there is a wealth of budget and road width in Phase 3, leaving a huge number of options for safety on the table. In the city’s Road Safety Action Plan, the city made it clear that safety is the city’s top transportation priority, a desire also clearly voiced in Seattle resident surveys.

People need to speak up for the right to cross the street, and demand an end to dangerous streets in the neighborhood. Complete streets are about everyone, including people in cars. We will not accept any more senseless deaths and injuries on our neighborhood streets, big or small. Traffic can flow and be safe at the same time. We cannot wait any longer to act.

The last aspect of the 23rd Ave project is the Central Area Greenway, an attempt to build a route on parallel neighborhood streets that are optimized for biking and walking. Working with Central Seattle Greenways, the city has developed some quality route options between the I-90 Trail and Miller Park.

However, extensive research, including community rides led by Central Seattle Greenways and members of the Seattle Bicycle Advisory Board (spearheaded largely by the wonderful Merlin Rainwater) have come up empty-handed in trying to find a reasonable parallel route at the north section of the project (south of the I-90 Trail could also be difficult). All options are either too steep or too circuitous to be considered a “parallel” route.

Central Seattle Greenways has presented a preferred route for the greenway, but the group has also heard from residents upset that their side of the street will not see improvements. This is the folly of trying to build a neighborhood greenway as an alternative to making a main street safe: It only helps one half of the nearby residents. A neighborhood greenway on 25th Ave does not help someone at 21st and Yesler cross the street or get to Douglass-Truth Library. A greenway on 22nd Ave does not help someone at 24th and Madison cross the street or get to Safeway.

Between John and I-90, the planned road diet and neighborhood greenway combo seems mostly workable. But the north section will likely require an actual complete streets design on the main street due to a lack of connected and gently-graded options nearby.

Phases 1 and 2 are close to having a workable solution, but Phase 3 is miles away from a plan that adequately addresses safety, walkability and bikeability. It’s a bit insulting that the city even presented this four-lane option with freeway-width lanes through a dense neighborhood that includes parts of Montlake, Capitol Hill, Madison Valley, Miller Park and the Central District.

Putting this four-lane proposal forward suggests the city was not actually serious when they said safety was the top transportation priority (a statement Mayor Murray agreed with during the mayoral race). Residents need to attend the upcoming meetings and voice support for safety and reconnecting these neighborhoods.