The case for a 23rd Avenue protected bikeway 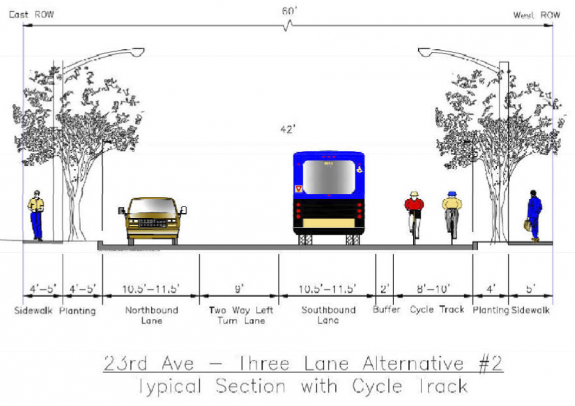 With transit speeds and safety improvements as their guiding principles, the city recently presented early ideas for design changes to 23rd Ave as part of the upcoming repaving and complete streets project stretching from E John to Rainier Ave (see my coverage over at Central District News).

One potential design option includes a two-way cycle track, rehabbed (but not widened) sidewalks, transit priority improvements and lots of repaving. However, inclusion of the cycle track is not a shoe-in. Project planners are getting pressure from Metro and some transit advocates who fear that a three-lane design at Madison/John and Cherry could delay buses, as suggested by early results from an in-process study (see more from a transit-centered point of view at Seattle Transit Blog). 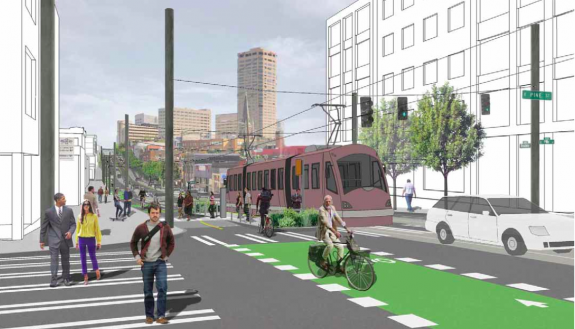 Much like the under-construction design for Broadway, a 23rd Avenue with a protected bike lane would be on the forefront of urban street innovation in the U.S. and would create a bicycle facility safe enough for people of all ages and abilities to feel comfortable using it (that’s the goal, anyway). In fact, this stretch of 23rd Avenue south of Madison has less daily traffic than Broadway (13,000–16,500 vehicles per day compared to Broadway’s 17,000).  The Central District has one of the highest rates of bicycle commuting in the city, and 23rd Avenue is the neighborhood’s most dangerous street and one of the biggest barriers to cycling within the neighborhood.

Further, I am convinced that transit reliability concerns can be met with a design that includes a protected bike facility. It might take some inventive design work and a combination of design strategies, but this project has the funds (about $20 million) to figure it out. 23rd Avenue could be the street that rewrites the rules for Seattle repaving and complete streets projects, leading the way with a design that meets our city’s core transportation goals of safety for everybody and speedy, reliable transit.

It is the first major project on a street that the in-process Bicycle Master Plan update identifies as a tricky “multimodal corridor.” This is our chance to set a standard with what could be one of the city’s only truly complete neighborhood commercial streets (and yes, in case you’ve picked up on my excitement, I live near this stretch of 23rd).

Today, 23rd Avenue acts like a barrier that splits the neighborhood in half. What should be a corridor that showcases the neighborhood’s character is, instead, a dangerous divide people often avoid. Once a year, thousands of people meet at Garfield High School (one of the city’s bikiest high schools) to march down 23rd Ave together in honor of Dr. Martin Luther King’s legacy. It is one of the largest MLK Day marches in the nation.

The event, which draws people from all over the region, drips with Central District pride and is certainly the biggest annual cultural event that happens on the street (Umojafest also holds a parade down 23rd during SeaFair). But for the other 363 days of the year, the street belongs to speeding cars, and people trudge along the cracked sidewalks to wait at the street’s squished bus stops just feet from the fast-moving traffic (and, I should add, well within the splash zone on a rainy day). While I’m not saying the project should aim to make every day a parade, the street should be more welcoming to activity than it is today.

I am pushing for a protected bike lane on 23rd (along with many people who attended the open house), but it is clear that there is pressure to instead work toward a so-called “parallel route,” likely a neighborhood greenway. However, whether such a route exists and would be sufficient for access to 23rd (I don’t believe so), there are currently no funds for such a project.

But all that is beside the point because, as residents pointed out at the meeting, neighborhood greenways are not substitutes for safe bike lanes on the commercial streets that house most our neighborhoods’ cultural and business destinations. A neighborhood greenway that connects the Lake Washington Loop (and, ultimately, the Montlake Bridge) to the heart of the CD and the I-90 Trail would be great, but it is not a replacement for safe biking and walking access to 23rd Avenue destinations.

In explaining Vancouver BC’s transportation strategy, former planner for that city Brent Toderian said their decisions are based on a framework that prioritizes people on foot first, people biking second, transit third, freight fourth and people in personal cars last. The city of Seattle has said that safety is its top transportation priority. I would encourage project planners to see the 23rd Avenue complete streets project through this lens.

Metro and anyone concerned about transit speeds must understand that anything that makes it less safe or appealing for people to access their stops is bad for transit. While I am definitely in support of faster and more reliable transit, road designs that also encourage speeding and discourage biking or walking (like lanes that are too wide or too plentiful) are not worth the time gained.

A mother holding her child tries to cross 23rd Ave, a dangerous and unappealing experience today

Presenters said initial transit flow studies suggested a three-lane design would work well for almost the entire length of the project area, but there could be issues at Madison/John and Cherry. Citing early results of an in-process transit reliability study, those intersections might drop to a “failing level of service” under a three-lane design. Several residents at the meeting pointed out that such level of service studies only look at vehicle travel and do not look at the service level for people on foot and bike.

If you were unable to attend, you can still comment on the project by emailing Maribel Cruz at SDOT by March 31.

Here are the meeting materials:

29 Responses to The case for a 23rd Avenue protected bikeway