Broadway Bikeway likely to open fully in May 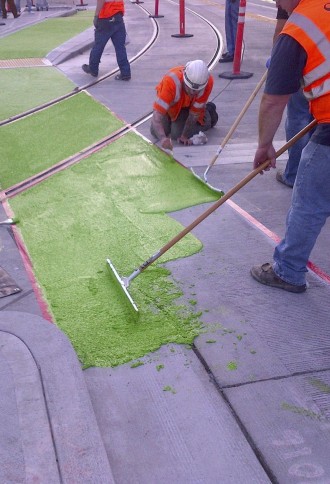 So much green paint. Image from SDOT

The Broadway Bikeway is getting so close to being paved all the way to Yesler, but it may not be fully opened until project work wraps up in May. This late opening is to avoid situations where people encounter unexpected closures due to continued construction, as has been a problem at the north end of bikeway.

The work may be completed earlier than this, but the contractor may have final work and repairs to do in the corridor.  To ensure this work will not require intermittent closures, we believe it best to open the bikeway when all the work in the corridor is substantially complete.

Perhaps having the bikeway open by the start of Bike Month is a great goal to aim for. How cool would it be to cut the ribbon May 1? Once it opens, there will be a protected space to bike all the way from Yesler Way to Seattle Central Community College.

One place where the technically-closed bikeway is already being used a lot is at the under-construction Marion Street streetcar plaza. This is one of my favorite side benefits of the Broadway Bikeway: It provides a safe and easy connection between Columbia and Marion Streets. 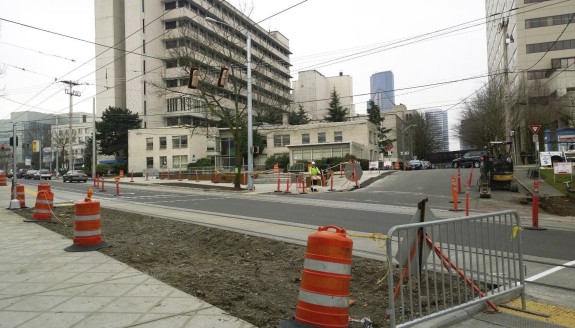 Image of Marion/Broadway from SDOT

Marion is a key bike route across First Hill, and Columbia is a great bike route across the Central District (and a potential neighborhood greenway identified by Central Seattle Greenways). But until recently, it was a headache to get across Broadway between the two streets, which are offset by a little less than a block.

But the Broadway Bikeway solves this issue nicely, providing a safe place to travel that half-block and a new signalized crossing at Marion (though last I checked, those signals were not yet operating). Here’s what that new bike pathway looks like overlaid on project schematics: 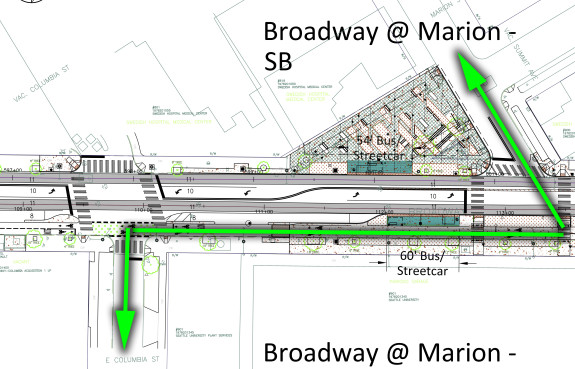 Due to a fire testing failure, the company building the streetcars are behind schedule on delivering the tram cars. Expected delivery is between June and October, Capitol Hill Seattle reports.

This means that the bikeway and complete streets elements will be completed for many months before streetcar service begins.

For more on project progress, you can watch this video from Tuesday’s City Council Transportation Committee meeting (starts around 63:00):

6 Responses to Broadway Bikeway likely to open fully in May