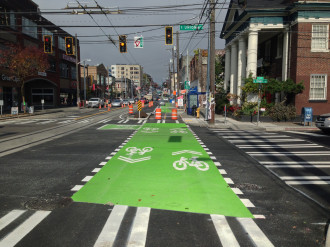 The Broadway Bikeway is officially open between Union Street and Denny Way.

This is the city’s first attempt at a two-way protected bikeway on a very busy commercial street.

We will have more on the bikeway soon. Here’s the announcement just in from SDOT:

Today the City of Seattle and Sound Transit officially opened a segment of the First Hill Streetcar’s Broadway cycle track for use by bicyclists. The demonstration segment, running from E Denny Way to E Union Street, is roughly a third of the overall one-mile cycle track on Broadway, which is expected to be fully completed and opened to bicyclists next spring. The cycle track, located on the eastern side of Broadway, will run from E Denny Way to Yesler Way when finished.

“We heard from Capitol Hill residents and businesses that they wanted a safe, protected bicycle facility on Broadway, and today we’re delivering on their request,” said Mayor Mike McGinn. “This cycle track can help improve road safety and contribute to a thriving business district.”

The Broadway cycle track will improve bicycle safety in a high bike use area, and was included as an element of the Sound Transit-funded First Hill Streetcar Project at the request of the community. Once complete, the cycle track will help bicyclists access streetcar stations, as well as the future Sound Transit light rail station at Broadway and Denny Way. Finally, it will connect to new bike lanes and markings coming to Yesler Way, 14th Avenue and Jackson Street.

“The cycle track is a great addition to the Sound Transit-funded streetcar project and will provide another great link in Seattle’s growing bicycle infrastructure network,” said Sound Transit Board member and Seattle Council member Richard Conlin.

The two-way Broadway cycle track is separated from motor vehicle traffic with a 2’ wide buffer, curbs or a vehicle parking lane. Safety features of the cycle track include intersection treatments such as bicycle signals, green pavement markings and traffic signs. Green pavement markings are also installed at driveways where vehicles and bicyclists will cross paths. Signage at driveways directs motorists to yield to bicyclists, while the signs and signals at intersections establish when each mode of transportation can safely proceed.

Note that there will be periodic closures of the cycle track to accommodate continued streetcar and light rail construction activities on Broadway in the coming months. Bike detour routes and signage will remain in place until the construction is complete. Sound Transit will be temporarily closing the northernmost block of the cycle track, between E Denny Way and E Howell Street, in January to complete construction of the light rail station.

Additional information regarding bicycling and the First Hill Streetcar can be found on the project website, located at http://www.seattlestreetcar.org/fh_bikes.htm.

46 Responses to City officially opens section of the Broadway Bikeway