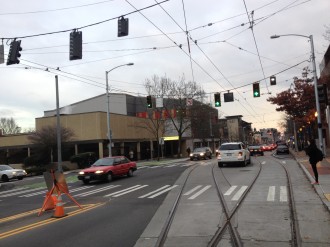 When the northernmost block of the Broadway Bikeway was closed suddenly in January to accommodate Capitol Hill Station construction, many people voiced concerns that the changes were dangerous and confusing for people on bikes.

Sound Transit responded by adding more detour signs to make it clear that the bikeway is closed, and that their preferred detour is for people biking to take 12th Ave.

Unfortunately, the changes may not have gone far enough. Not everyone is headed somewhere with easy access to 12th Ave, and fewer still will be willing to bike six blocks out of the way.

A woman heading south on Broadway was struck by a turning car at Howell Monday while trying to make it to the temporary start of the two-way bikeway. Luckily, she was not seriously injured, though her wrist was hurt and she had other bumps and bruises. Here’s what she told Capitol Hill Seattle:

SB cyclists on broadway have two ways to get over to the cycle track, and there has been no signage or direction to indicate what they should do since this block was re-striped (also with no signage or warning). You can ride up to the light and stop as if making a left turn to Howell, though there is no turn lane so cars coming around the construction sb have to squeeze by on your right.

I typically do this when broadway is busy. Other times I usually take the lane past Denny, signal left, and enter the single lane of the previous cycle track, thinking the sooner I’m in the lane the safer. Today I had done the latter. A nb car approached with its right turn signal on. I looked at the car, as I usually try to make eye contact when crossing a car’s path, but couldn’t see in the car. It seemed to be slowing down, so I mistakenly assumed they had seen me and continued through the intersection, where they hit me.

I think the current design there is very confusing for cyclists and drivers alike, and it doesn’t seem like a lot if thought went in to impacts up cyclists. I also think there I’d probably a lack of awareness about the two-way cycle track, and so nb right-turning cars might not be accustomed to checking for sb cyclists…

Of course in the eyes of the police the question is whether or not I was in the crosswalk and how fast I was going. Does cycle track in an intersection have any legal protection? And what about when that cycle track is hastily modified for construction?

The majority of the Broadway Bikeway is scheduled to open in May, stretching from Yesler Way to Seattle Central Community College. However, the construction at the north end will continue in some form for most of 2014.

The collision on Broadway was only one of several traffic injures on Capitol Hill Monday morning. CHS also reports that a person was struck by a car crossing 23rd Ave at Aloha. Fortunately, the person struck was not seriously injured.

This is the same section of 23rd that the city where the city currently plans not to improve safety as part of an upcoming high-budget repaving project.