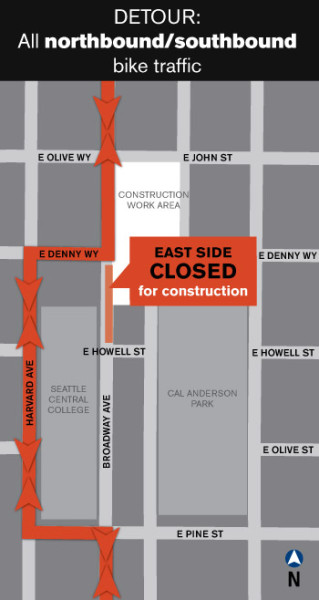 If your bike travels take you near the future Capitol Hill or UW light rail Stations, then you are no stranger to frustrating detours. Well, don’t get your hopes up, they’re not getting any better any time soon. But they are changing.

Sound Transit is moving to the second phase of work to dig an underground walkway connecting Capitol Hill Station to the west side of Broadway (and the First Hill Streetcar stop there). That means that the Broadway Bikeway detour remains in place, and anyone who still tries to bike through the construction area should be prepared for the route to shift to the other side of the street.

When the detour first started, there were some serious safety concerns, so Sound Transit and SDOT improved the detour by adding a 4-way stop at Denny and Harvard to make it easier to use Harvard as an alternative to Broadway.

I highly recommend following this detour, since the mix of a tight, busy detour and the bike-wheel-grabbing streetcar tracks create an unfriendly and potentially dangerous mix.

Capitol Hill Seattle reports that this work was originally scheduled to end in December, but it running about three months behind schedule. 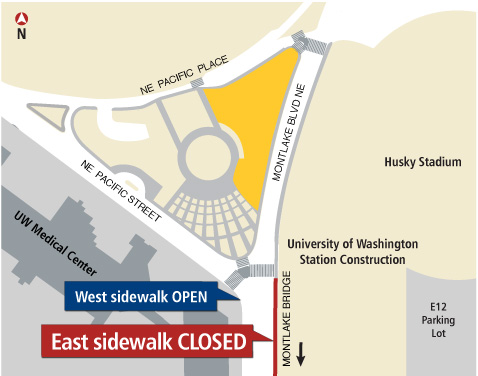 Be aware that the east sidewalk north of the Montlake Bridge is scheduled to be closed through Tuesday. I know anyone who bikes through the area is pretty much used to awful, ever-changing detours, but this one could be extra bad if you use that side of the bridge. So plan ahead and give yourself extra time. Or bring your off-road bike so you can take the largely-unpaved “East Campus Bike Route.” Details from Sound Transit:

Sound Transit’s contractor will close the east sidewalk on Montlake Blvd. between NE Pacific St. and the Montlake Bridge on October 6 and 7 to complete sidewalk improvements. 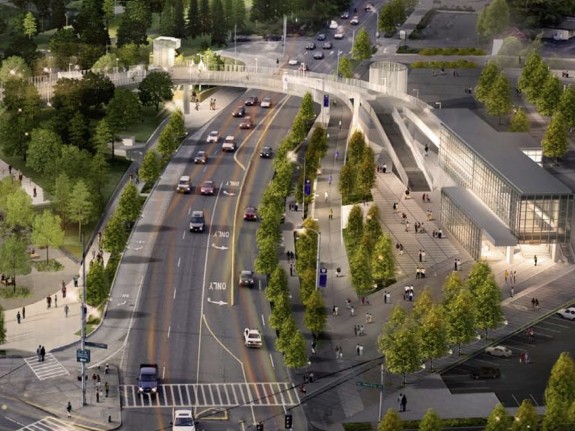 The primary structure for an elevated trail bridge over Montlake Boulevard has been taunting anyone biking of walking near the UW Station and Rainier Vista construction areas for a long time now. So with the station building itself looking very close to completion, what about the trail? Light rail service won’t start until 2016, but will the bridge open earlier?

Maybe, but it will be at least a year. I asked UW transportation staff for an update, and Project Manager Andy Casillas sent this response:

We suspected that there would be a desire to have the Sound Transit bridge and ramp open up at the same time as the Rainier Vista work and have started  to initiate conversations with ST on this. As this means starting some warranty issues earlier for ST (elevator, landscaping, etc.) it may take some time to come to a definitive answer on this. Current schedules are for the Montlake Triangle Project, lower vista and triangle garage lid, to open late June 2015. Sound Transit will open transit operations first quarter 2016. ST operations includes the bridge over Montlake and the stairs and elevator on the northern tip of the triangle. Again, the later items are in discussions to open concurrent with the triangle but do not expect a resolution on this until just before triangle area opens next year.