Congratulations to Ed Murray, Mike O’Brien and other election winners 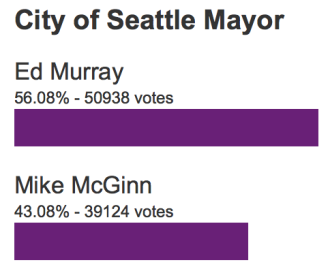 Results as of Tuesday evening

Ed Murray has been elected as the next Mayor of Seattle.

We look forward to covering transportation issues under his leadership. He has campaigned on the claim that he can forge the partnerships needed to get things done, including safe streets. Now we’ll get a chance to see if he was right.

Seattle Bike Blog endorsed incumbent Mayor Mike McGinn in this election, and we have been rather critical of a series of safe streets missteps Murray and his campaign made in the run up to the election.

In the end, we were wowed by McGinn’s excellent knowledge of transportation issues and his bold efforts to improve the state of transit, walking and biking in the city. He was even willing to spend some political capital to do it. This earned our endorsement. And honestly, there was little any challenger could have done to pry it from him. McGinn has been a great mayor.

But Murray has shown that he is not the kind of stubborn politician who will double-down on a mistake. When he was called out after making statements against completing the Burke-Gilman Missing Link in Ballard or making statements against the NE 75th Street road diet, Murray reassessed the issues and changed his mind about them. Some people don’t like that in a politician, but I don’t see it as necessarily a bad thing. Stand firm on convictions, but not on every erroneous or mistaken remark.

We hope he retains and/or hires forward-thinking transportation staff to help advise him on the issues and lead the city’s investments in bold cycling infrastructure and safe streets. 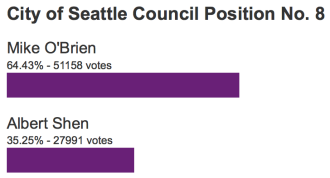 Mike O’Brien won big over well-funded challenger Albert Shen. We endorsed O’Brien emphatically because he is great on the council and a steadfast supporter of safe streets and city cycling.

Unlike Murray, Shen has been an outspoken opponent of bike infrastructure in the city, even calling bike lanes an attack on working families. Yikes.

It’s great that the Seattle electorate, which is typically more conservative in an off-year like this, still saw right through that nonsense. We look forward to another O’Brien term.

All other SBB-endorsed candidates also won their seats, though none of the races were hotly contested. Neighborhood Greenways booster Sally Bagshaw and Nick Licata both skated through their races with over 80 percent of the vote as of election evening. Dow Constantine cleaned up the County Executive spot with a record-breaking 78 percent of the vote.

We did not endorse in the Conlin-Sawant race, but Conlin is looking very strong with a 54-46 lead. I’m no statistician, but that looks like a hard gap to close (Sawant did not concede as of election eve).

Cascade Bicycle Club says at least 38 of their endorsed candidates around the region were elected Tuesday, noting that a majority of the Bellevue City Council is now in favor of investments in biking, walking and transit.

NOTE: I’m in Canada at the moment, so a little out of touch until later today. Any other races in the area that you think went well/poorly for people on bikes? Let us know in the comments below.

25 Responses to Congratulations to Ed Murray, Mike O’Brien and other election winners