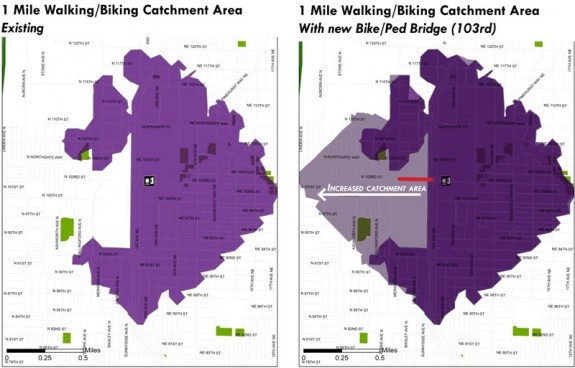 The bridge would dramatically increase the ability for people to bike and walk to the upcoming light rail station. Both Sound Transit and the city have pledged millions toward the project, but a funding gap remains.

The alternative plan is to simply build a bigger parking garage next to the station, even though only about eight percent of station users are expected to drive there and the adjacent Northgate Mall is already surrounded by a sea of car parking.

In a Feet First questionnaire, the mayoral challenger appeared unwilling to dedicate himself to funding the key biking and walking bridge:

It’s an unfortunate reality that Seattle cannot fund every beneficial project. We simply do not have the money. We need to get clear on our priorities, rather than relying on half measures.

Mayor Mike McGinn, on the other hand, was unwavering in his support for finding the rest of the funds to make the bridge happen (yet another reason we have endorsed him):

There are several potential funding sources, such as real estate excise tax, Bridging the Gap funds, other tax revenues, grant funds, or a combination of those options. I will work with our central budget office to determine the best way to allocate the $5 million commitment by the 2015 “due date”, so that we can take advantage of Sound Transit funding and build this important connection. 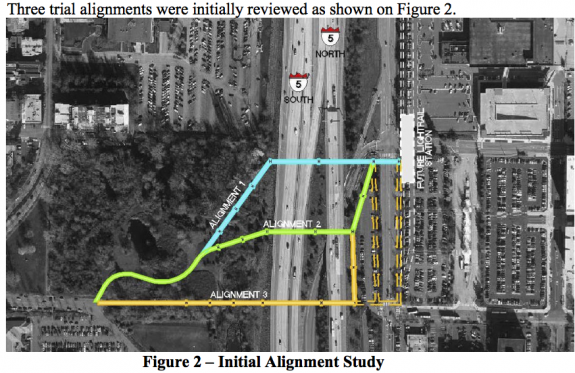 Alignment 1 has been ruled out after initial study

Publicola reports that the Murray campaign is backing off on their hesitancy, and that he now supports fully funding the bridge through a mix of public and private funds:

Ed’s position is that improving bike and pedestrian access to the future Northgate light rail station should be considered a real priority, including an I-5 pedestrian and bicycle bridge. As Mayor, Ed will go a step beyond the current administration and not just commit partial money to a priority project, but find a way to work with public and private partners to actually fully fund it. That is what should have been done in the case of the I-5 pedestrian and bicycle bridge.

It might seem at first like easy politics to tie Mayor McGinn to “unpopular” biking and walking projects as an easy way to beat up on him. But it turns out, these projects are extremely popular, and the mayor’s leadership on biking and walking issues is fairly unassailable.

Murray’s series of recent reversals on biking and walking issues shows two important things. 1: He is willing to admit when he’s got something wrong instead of doubling down on a bad call, and 2: He gets these things wrong a whole lot more often than Mike McGinn.