Looking to stand out from the mayoral pack? Challenge McGinn with a bike-friendly vision 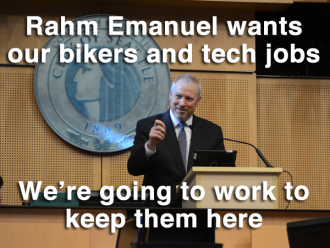 Are you running for Mayor of Seattle, but don’t know how to stand out among a packed crowd of challengers to incumbent Mike McGinn?

Stop reading Internet comments and come out with an inspiring vision for a biking and walking-friendly Seattle. Talk about making bold choices to create truly efficient transit. Paint a picture of people of all ages, abilities and income levels finding it easy, convenient and safe to walk and bike to their neighborhood school or to the grocery store.

Because right now, the nervous pack of challengers is playing it “safe” and letting McGinn run away with the label as the most progressive and inspiring candidate on transportation issues.

Seattle Bike Blog has yet to endorse a candidate in the race, and we will wait to see how the race develops as the August primary draws closer. However, so far nobody seems interested in challenging McGinn on innovative transportation.

Ron Sims, who rides a bike and has expressed strong support for improving access to safe cycling infrastructure in low-income neighborhoods, seemed to be the best candidate for challenging McGinn on bicycling. But when Sims announced early this week that we will not run for mayor, many of his potential votes went to McGinn.

Councilmember Tim Burgess announced his transportation platform this week, and it gives almost no attention specifically to bicycling and shies away from making any bold plans for improving transit or walkability. He mentions how ridiculous it is that Seattle has essentially no plan for fixing sidewalks (he’s right), and says “he would adopt smarter strategies to set achievable, outcome-based goals to keep sidewalks in good repair for all users.” Without a promise of significant funding, it’s hard to take this seriously.

Meanwhile, the neighborhood greenway movement has exploded under Mayor McGinn’s watch, and many neighborhood groups are looking into how the city can use creative and innovative street designs to significantly calm traffic in neighborhoods without sidewalks. This is a community-driven and cost-effective attempt to deal with the dangerous and unacceptable problem of missing neighborhood sidewalks.

But so far, Burgess has hardly been much of a figure in the neighborhood greenway movement, which has found active support from several of his fellow councilmembers and McGinn’s office.

That, of course, doesn’t mean it’s too late for him to get involved. In fact, he needs to do so in a significant way if he wants to pull much of that grassroots momentum (and those drawn to the vision it represents) in his direction.

A recent poll shows that Burgess is the closest candidate to challenging McGinn, but he is still closer to the pack than to the incumbent leader. Other candidates floating down in the single digits—like Peter Steinbrueck, Ed Murray, Kate Martin and Bruce Harrell—have not spent much time talking about the important role of bicycling in Seattle’s future.

It is clear that Seattle voters really like bicycling and think the city should be working to make bicycling safer and easier. In a recent survey commissioned by Cascade Bicycle Club, 66 percent of voters said safety for all road users should be the city’s top transportation priority. Only 20 percent of voters said they did not think the city should build more safe bike routes.

McGinn at this point is the only candidate who is outspoken in his support for bold transit, biking and walking projects. He has taken big political hits for standing behind controversial projects (and, we should add, has been proven to be right about almost all of them, though his vindication earned him fewer headlines).

We have spent plenty of time on this blog bemoaning what we see as a slow rate of change on our city’s streets, most of which remain far too dangerous and far from the vision of comfortable and inviting walking and biking that most Seattle residents share. McGinn’s support from the many, many passionate people who feel strongly about biking, walking and transit is not completely locked down. But it will be if nobody challenges him.

The biggest group in the recent poll (34 percent) were “undecided” about who they would vote for. Which of the following do you think will attract more people?

Anyone going to step up to the plate?

9 Responses to Looking to stand out from the mayoral pack? Challenge McGinn with a bike-friendly vision