Seattle traffic deaths up in 2015, but serious injuries are down 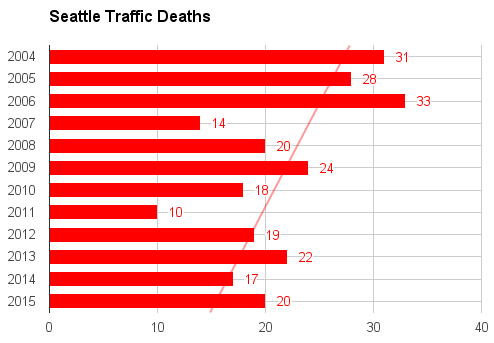 These numbers “do not include those on limited access State Highways and Interstates within the city limits,” according to the city. Aurora is included north of the Battery Street Tunnel because this section is not limited access.

Twenty people died in Seattle traffic last year, up from 2014’s total of 17 and above the trend the city needs to achieve zero traffic deaths by 2030, one of the city’s Vision Zero goals.

Mayor Ed Murray did not mention bikes in his State of the City address. But he did mention traffic safety saying, “Last year, by launching Vision Zero, an innovative strategy driven by data and focused on eliminating traffic deaths, we reduced fatalities by 25 percent, reaching an all-time low for the city.” Sadly, the mayor’s numbers were not accurate.

A full quarter of the entire year’s traffic deaths in all of Seattle happened in one collision: The Ride the Ducks tragedy on the Aurora Bridge.

If that horrifying wreck had not happened, the city would be ahead of the pace it needs to reach Vision Zero in the next decade and a half. But the wreck did happen. Victims are still working to heal and come to terms with life-altering injuries, and the Ducks are already back on the streets.

In addition to the five people killed in the tragedy, 16 were seriously injured, accounting for 12 percent of the total serious traffic injuries in the city in 2015.

With such a massive collision adding to the total, it’s very impressive that the city’s serious injury total reached a modern low point at 130 (down 23 percent from 2014).

This is a big deal, and puts the city on track to reach another Vision Zero goal: Zero serious traffic injuries by 2030. It’s particularly impressive considering that fatal traffic collisions nationwide were up a stunning 9.3 percent in 2015 (PDF) and serious injuries were up 30 percent in the first half of the year. Seattle is doing something right that the rest of the country isn’t. 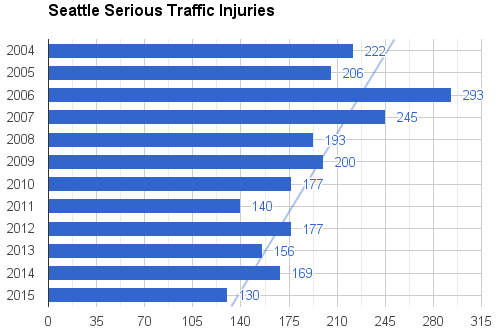 We can do this. The trend line says we cut about 100 serious annual traffic injuries in ten years (42 percent). So we have 15 years and a lot more safe streets funding in hand to cut another 140.

But it’s not going to be easy. SDOT, WSDOT, advocacy groups and active community members are going to need to work hard to make sure bold investments happen where we really need them. City leaders need to build protected bike lanes and road safety redesigns even when faced with tough political opposition here and there. And we’re going to have to deal with our major problem streets, like Aurora, Lake City Way and Rainier.

But the goal is worth it.

This entry was posted in news and tagged deaths, ed murray, injuries, ride the ducks, vision zero. Bookmark the permalink.

13 Responses to Seattle traffic deaths up in 2015, but serious injuries are down