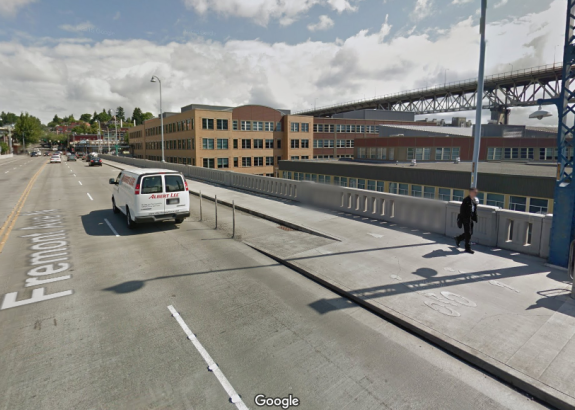 If you bike across the Fremont Bridge regularly, then you know this terrible merge lane well. People biking are routed down a ramp into what becomes a shared bike and right turn lane. You have to be extremely on guard, but there’s also an element of simply hoping that anyone merging to go right sees you.

Well starting tomorrow (Friday), the city and Ride the Ducks have made plans (PDF) to route the notoriously-dangerous amphibious vehicles onto the Fremont Bridge, using this turn lane to access 34th Ave N en route to Lake Union. The route also has them turning right from 34th at Stone Way, turning across a bike lane and crossing a sometimes sketchy intersection with the Burke-Gilman Trail.

The vehicles have huge blind spot challenges in large part due to their very long front ends. This is perhaps highlighted best by a terrifying collision where the Duck driver didn’t see a man on a motorcycle downtown and ran over him at a traffic signal. The company says they have installed cameras to help drivers see.

But even with cameras, it feels very worrying to route these things into an already-dangerous bike merge lane.

I’m not sure why we are allowing the Ducks back on Seattle streets at all after the immense amount of death and injury they caused just months ago on the Aurora Bridge. The bridge didn’t cause that wreck, the Duck vehicle did. And since it’s designed as a military vehicle, not for traffic, it caused immense damage. That should have been the final straw.

But if we are going to allow them on our streets, then we need to make sure we aren’t setting them up to hurt more people. As it is, it doesn’t feel like a matter of “if” but “when” the Ducks hurt another person.

This merge should be fixed anyway, Ducks or no Ducks. It’s terrible. But before the Ducks start operations, this area needs some serious safety upgrades. And maybe Ride the Ducks should also help pay for the changes. We should also make some upgrades to the Burke-Gilman Trail crossing at Stone Way.

Here’s the planned route map from the city: 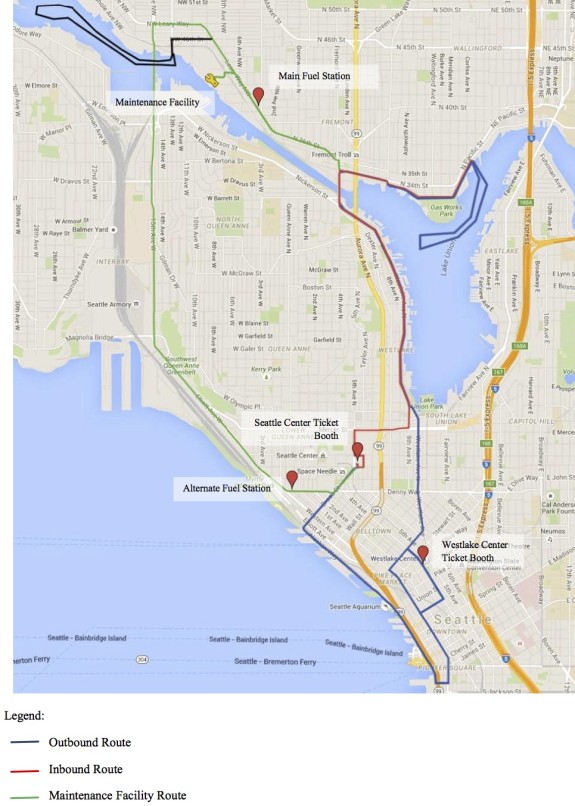 This entry was posted in news and tagged fremont bridge, ride the ducks. Bookmark the permalink.