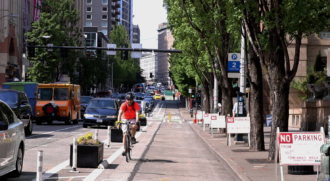 Seattle is acclaimed for being a very bike friendly city, as a recent Zillow study ranked Seattle as the nation’s best largest-city to bike in [Editor’s Note: I’ve been very skeptical of this study, as I told the Seattle Times last month]. But some people who bike still take issue with some of the bike infrastructure.

Since March, the Seattle Bike Master Plan of Seattle Department of Transportation began executing its 2016-2020 Implementation Plan to increase bike safety and ridership throughout the city.

Based on SDOT data, between the years of 2015 to 2016, traffic peak times and bike safety downtown have improved. In particular, upgrades to the Second Avenue protected bike lane decreased bicycle collisions by 82 percent.

While it is a start in the right direction, some locals said they do not want city planning to stop there. The protected bike lanes on Second Avenue should only be viewed as a short-term fix, said Kris Skotheim, a decade-long cyclist and manager of the ASUW Bike Shop.

When it comes to policy, city planners and cyclists are not on the same page. Looking forward, cyclists said they hope their community can join together in becoming more vocal about their experiences, as a way to justify future spending on better bike infrastructure.

This perspective comes both from people with more than a decade of biking experience, including Manó Bárkovics and Mark Kleinsasser, as well as Lenny Gershfeld, who does not cycle but has decades of experience navigating bustling urban cities like New York City and Seattle within his car.

This entry was posted in news and tagged news lab, sidney sullivan. Bookmark the permalink.