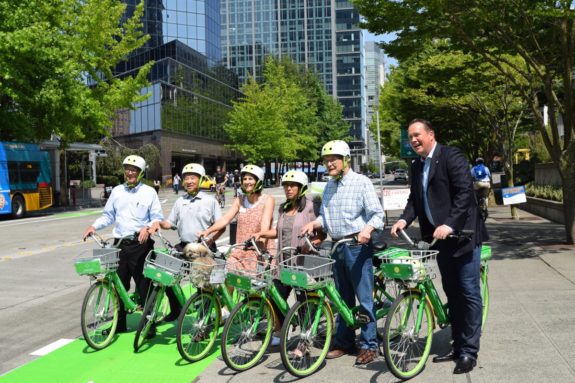 Bellevue City Councilmembers at the bike lane opening celebration. Photo from the City of Bellevue.

I just had by far the least stressful bike ride through downtown Bellevue in my life.

The newly opened 108th Ave NE bike lanes span the Eastside city’s downtown from NE 12th Street in the north to Main Street in the south, forming what could become the central spine of a Bellevue bike network.

The city launched the bike lane as a pilot project, saying they will study how it works over the next year and make changes to the final design as needed (the study framework is outlined in this PDF). The project is part of an effort city planners are calling the Bicycle Rapid Implementation Program, which is funded by a voter-approved 2016 transportation levy.

The bike lanes connect to Bellevue Transit Center, so the launch of bike share is timed perfectly to complement the new more comfortable route. People can now take one of many buses into downtown Bellevue, then hop on a Lime-E bike to go the rest of the distance to their destination. The city made a big leap in mobility choices all at once. 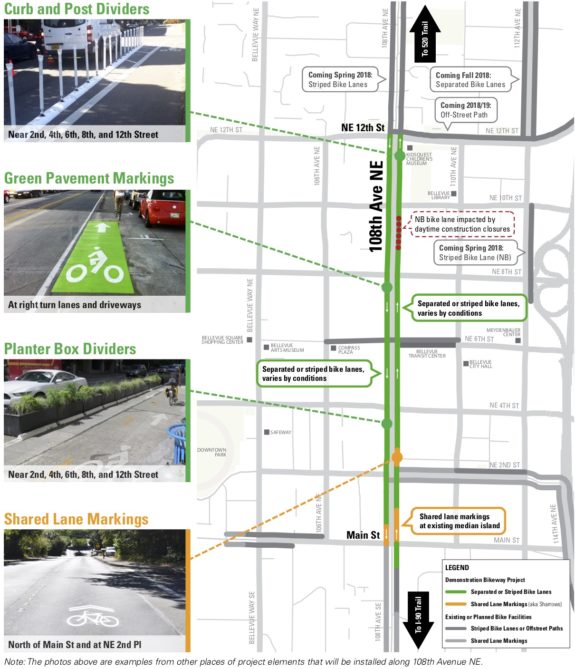 Speaking of bike share, there are now 100 Lime-E bikes on the streets, with hundreds more allowed by the end of August and as many as 1,200 by the end of the year. And the city has marked out a bunch of bike share parking spaces on sidewalks: 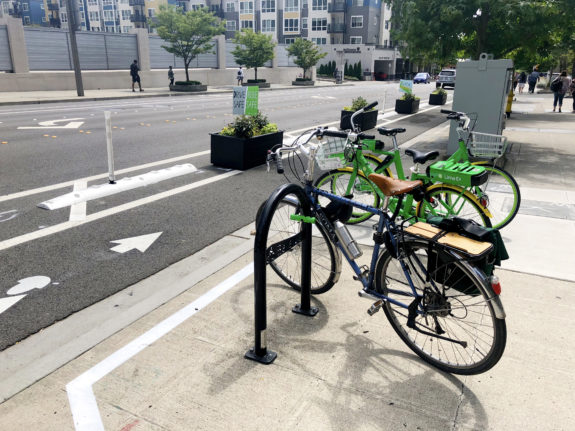 The Seattle Times pegs the cost of the pilot bike lane at $370,000. Some sections are fully protected by plastic curbs and posts while others are paint-only. And a few short sections where existing boulevards or curb bulbs form pinch points have only sharrows. It’s not perfect, but it’s a huge leap forward for a city that can be very stressful on a bike. 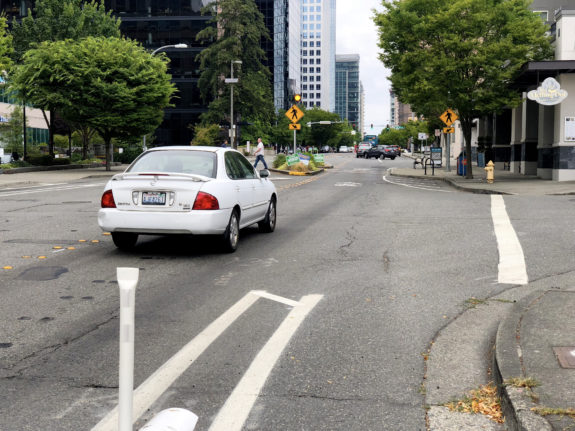 I expect this lane will be enough to increase biking in Bellevue somewhat, but there is still a lot of work before the majority of downtown destinations are easily and comfortably reachable by bike. One street is not going to get widespread results. It can help some people and demonstrate the potential for such bike lanes, but widespread use won’t happen until people can reliably get wherever they are going via comfortable bike routes.

The city is opening the door for a significant transportation culture shift, but such a shift won’t happen overnight. People in the habit of driving every day will need to make a leap of faith to give biking a try instead. But now that this lane is in place, there’s a much better chance that they will enjoy it and keep going.

Getting to downtown Bellevue from many directions still requires some fairly stressful biking mixed with car traffic or squeezed into skinny shoulders. So I hope this lane is the start of something big in Bellevue.

There’s a lot of work to do, but the city has good momentum and a solid plan. They can do it.

This entry was posted in news and tagged bellevue. Bookmark the permalink.

19 Responses to Bellevue just opened bike lanes through the heart of its downtown, launched bike share