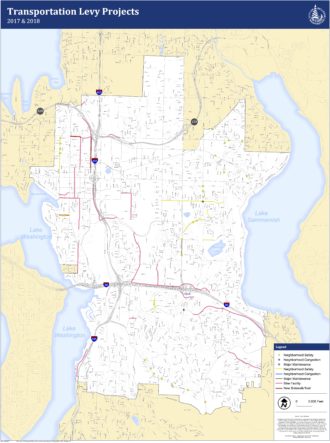 Amid all the other giant issues on the November ballot, it may have been easy to miss the news that the people of Bellevue approved a transportation measure that includes funding to kickstart a renewed effort to get their bike network plans back on track.

The city’s “Bicycle Rapid Implementation Plan” is based on Bellevue’s existing Bicycle Master Plan, which has never been significantly funded. But the political leadership on bicycle transportation has shifted in recent years. In December 2015, the Bellevue City Council unanimously endorsed Vision Zero. They also tasked their transportation staff with improving the city’s horribly-fractured bicycle network, which often requires people to bike mixed with fast-moving traffic.

Rather than create a whole new master plan, city leaders decided to create a near-term action plan that could be largely funded as part of a 2016 transportation vote. That decision has worked out well so far. A year and a half after they started planning work, the city has a five-year plan to create a mostly-connected network of bike routes, many of which will be protected bike lanes or trails. And thanks to voters, they also have the funding to make it happen.

Cascade Bicycle Club’s East King County Policy Manager Vicky Clarke has put together a handy online tool you can use to send Bellevue’s City Council a thank you note.

Last week, the Council approved the 2017-18 project list (see map above), which includes some key pieces of new bike lanes focused on north-south routes. If the plan is constructed on schedule, there will still be many missing connections. But it will fill some major needs and make serious progress on the five-year vision: 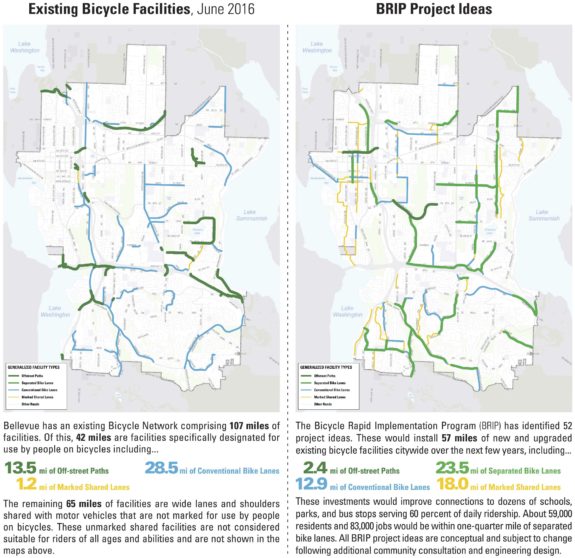 Note that the map on the right is the five-year plan. The map at the top of this post shows the projects approved for funding in 2017-18.

Obviously, people need to stay involved in each project and make sure future budgets keep the plan on track, but Bellevue is off to a promising start.

More details on the Bellevue news, from Cascade:

2016 was a big year for Bellevue bike advocacy! You wrote letters, rode bikes with council, attended open houses and spoke up (while wearing your Bike Network T-shirts) at countless meetings — all to say that the Bellevue Bicycle Network matters to the community.

Bellevue staff and council heard you, and worked hard to respond. Together, we did It! The city has identified a long-term funding source to begin to build the Bellevue Bike Network.

The Bellevue Bike Network, as envisioned through the city’s 2016 Bicycle Rapid Implementation Plan (BRIP), is a 57-mile network of new and improved facilities — including 23 miles of separated bike lanes and 13 miles of conventional bike lanes.

Now with $1.6M dedicated to start building the bike network over the next two years, and longer term funding available, we’re taking a moment to celebrate.

But our work is far from done.

Our collective voice is still needed, in order to make sure projects on the ground meet the needs of people who bike. We’ve already turned our attentions to reviewing which high priority projects the city is starting to consider for immediate funding.

Cascade’s challenge to the city now is for them to demonstrate their plan to use these funds to stay true to the rapid implementation intent of the BRIP, and build projects that connect people safely to the places they need and want to go in Bellevue. That means protected bike lanes and trails, not shared-lane markings, or “sharrows.”

We’ll need your voice and the voices of your friends and colleagues to carry that message forward. To start, we’re saying thank you to council for prioritizing investments in bike lanes, by securing funding.

We’re still waiting to hear the project details. But last week, when asked by Bellevue Transportation Commissioners what facilities types would be funded, Dave Berg, Director of Transportation for the city said, “they will be protected bike lanes. I hasten to say this is standard, but this is what people expect.”

Protected bike lanes are a must, and it sounds like the city understands that – at least conceptually. We’ll be tracking Bellevue closely as they begin rolling out project proposals and will be calling on advocates like you to tell the city just how essential these investments are.

Bellevue has come a long way towards orienting transportation system planning to incorporate multi-modal principles. It’s no small feat to have secured a potentially stable funding source for the Bellevue Bike Network!

Please send a quick email to council, to say thanks for taking this step, but that the next phase is equally important.