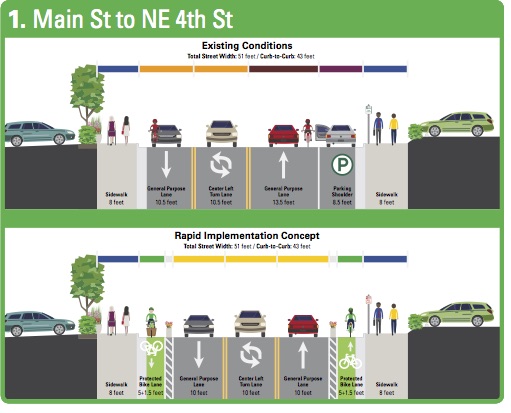 Bellevue is developing a bold plan to build 57 miles of bike routes in the next five years, including 23 miles of protected bike lanes, 13 miles of painted bike lanes and two miles of off-street trail.

If this plan is funded and constructed, Bellevue would open much of even the densest parts of the city to people who want to bike, but do not want to mix with busy traffic.

The plan includes a completed and almost-fully-protected bike route from the 520 Trail to downtown, for example. It also includes bike connections to parts of Bellevue that currently have zero or very few options for getting around by bike at all.

You can provide feedback and enthusiasm for the plan during an open house 5 to 7 p.m. Wednesday at Bellevue City Hall (Cascade has a sign-up page if you want to plug in with their efforts). You can also view and comment on specific project concepts via their wikimap.

As we reported previously, rather than creating entirely new master plans for biking and walking, Bellevue chose to instead create an initiative to speed up and target implementation of their existing plans. The City Council also endorsed Vision Zero in December, with an emphasis on designing safer streets for all road users.

The city has reached an important step in the process, releasing a high-level draft concept for an implementation plan. After transportation staff lead by Franz Loewenherz gather public feedback and make final adjustments to the plan, it will be up to the Bellevue City Council to fund it.

Below is a draft map of the bike lanes, trails and sharrows included in the plan. Note that this map does not list existing facilities, only proposed new or upgraded ones. So some of the gaps in the map are actually connections to existing bike routes that abruptly end (a big problem in Bellevue today). 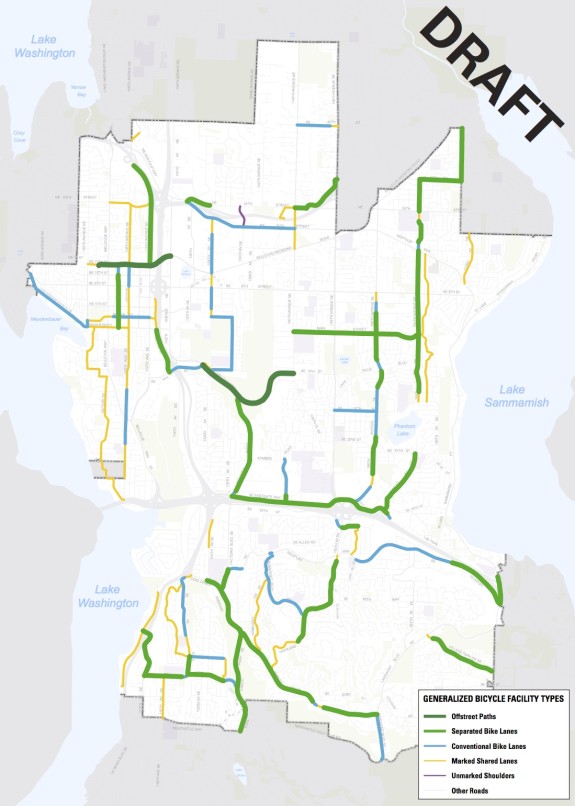 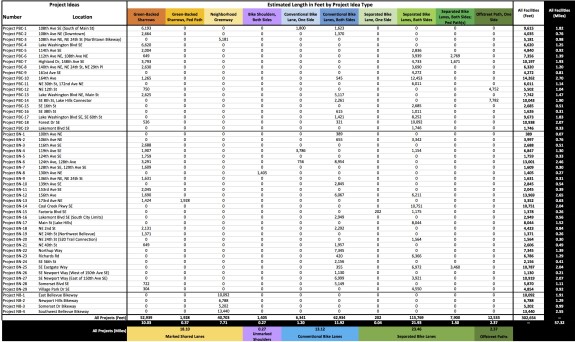 Sure, not every project is perfect. There are plans for only sharrows in some busy parts of the city, for example. But if Bellevue can pull all this off in five years, wow.

More details from the City of Bellevue:

If you’re interested in improving the city’s bicycling network, an upcoming open house offers a chance to shape project ideas to create a safer, better-connected system.

The open house will take place from 5 to 7 p.m. Wednesday, March 23, at City Hall, 450 110th Ave. NE. A short presentation followed by an instant-feedback polling exercise will run from 5:30 to 6 p.m. Other open house resources will include display boards, project maps, and Transportation Department staff available to answer questions. Light refreshments will be served.

Transportation Commission members will use feedback from the open house, as well as from an online, interactive wikimap, to make budget recommendations for citywide investments in bicycling infrastructure. Officials want the public’s help to evaluate and prioritize the project ideas.

Residents and others can use the wikimap, available now through April 30, to comment on specific project ideas and understand the tradeoffs that sometimes are needed to improve the bicycle system. Examples of possible improvements include conventional bike lanes, separated bike lanes and off-street paths.

The wikimap builds on a similar effort last fall when more than 700 participants identified locations where they have noticed conditions making it uncomfortable for people walking and bicycling. Ideas presented in the current round of outreach respond to the feedback.

In all, 52 projects ideas covering 57 miles citywide, will be available for review at the open house, and via the wikimap. The project ideas, if implemented, would help connect bicyclists to where they want to go. All are designed to be completed over the next five years, pending funding.

The open house and wikimap are part of a wider effort called the Pedestrian and Bicycle Implementation Initiative.