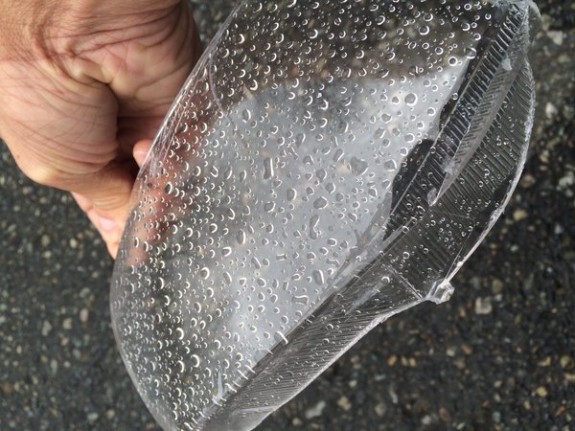 If you see a suspicious vehicle missing a headlight like this one, that may be the suspect. Photo from Bellevue PD. 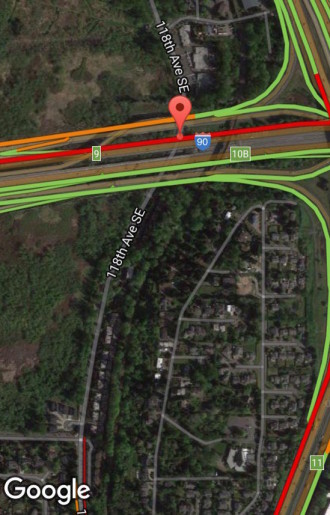 Map of the incident location from Bellevue PD

Someone driving an unknown vehicle struck a woman biking in Bellevue this morning, critically injuring her. The suspect left the woman in critical condition on the side of the road and fled the scene without even calling for help.

The location is a major crossing of the I-90 Trail. 118th Ave SE is also a popular north-south bike route in Bellevue. There has been no indication yet from police how the collision happened.

In fact, KOMO reports that a passerby spotted the woman lying on the road around 6 a.m., but it’s not yet clear how long she was lying there. She was thrown 100 feet from the collision site, and the person driving left her for dead.

She was rushed to Harborview with critical injuries. We send our best wishes. 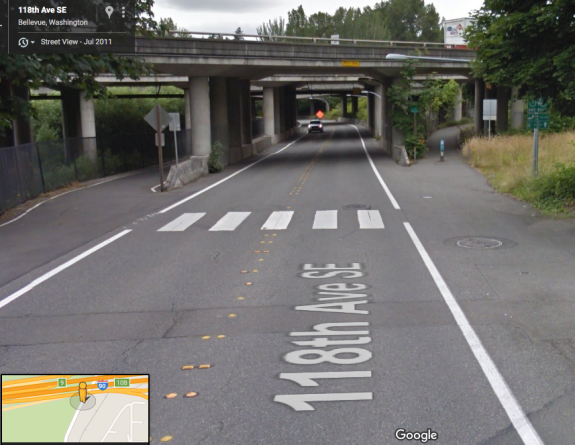 Image of the collision location from Google Street View.

This is the #bicycle the #NorthBend woman was riding in #Bellevue this AM when she got hit. #komonews pic.twitter.com/uLoZTh8LfA

UPDATE: The Seattle Times reports that the call came at 6 a.m. (I’ve updated the story above). The woman was crossing in the crosswalk when someone driving south struck her. She has “extensive” life-threatening injuries, Bellevue PD told the Times:

Tyler said the woman was riding on the Lake to Lake Trail, which crosses 118th Avenue Southeast at a crosswalk. Investigators believe she was hit in the crosswalk by a vehicle traveling south.

A person driving by saw the woman about 100 feet south of the crosswalk, gave aid and called 911 at about 6 a.m., Tyler said.

“As far as how long she had been laying in the road, we don’t know at this point. We don’t have the driver of the car,” he said.