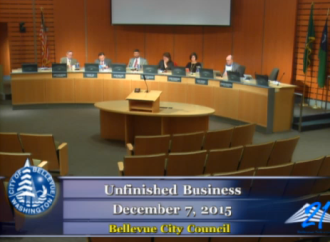 In fact, there was very little discussion or debate about the resolution (PDF), which sailed right through. You can watch the very short proceedings here or in the video posted below.

“I know there’s still a tremendous amount of work to be done” to integrate the policy into the city’s comprehensive plan and the bike/walk initiative we reported about previously.

The resolution does not itself do anything direct, like funding specific safe streets projects. But it does realign Bellevue’s often car-movement-at-all-costs point of view evident by anyone trying to walk or bike in many parts of the major Eastside city. The staff memo (PDF) for the resolution acknowledges the role of “unforgiving” street design in the deaths and injuries of people on Bellevue streets:

At the core of Vision Zero is the belief that death and injury on city streets is preventable—that, for the most part, these are not “accidents” that occur but collisions that could be avoided. Collisions are often the result of poor behaviors and unforgiving roadway designs, so the problem must be approached from multiple angles: street designs that emphasize safety for the most vulnerable users, predictability and the potential for human error, coupled with targeted education and data-driven enforcement efforts.

Cascade Bicycle Club notes that there have been 450 collisions involving people walking in Bellevue in the past ten years. That’s nearly one a week. So protecting vulnerable road users is a major requirement if the city is going to achieve Vision Zero.

The Bellevue staff memo also notes these ways the city can work toward the goal:

Bellevue now joins the ranks of many cities around the country, including Seattle, Kenmore and Kirkland, that embrace road safety through Vision Zero. This is a big win for everyone who wants to more comfortably and safely walk and ride a bicycle in Bellevue.

In a council meeting on Monday, Dec. 7, Mayor Claudia Balducci emphasized the importance of moving quickly to adopt this resolution. While the adoption of this resolution represents real progress, Balducci acknowledged that it is just the beginning, and Bellevue still has a “tremendous amount of work to be done,” particularly in respect to incorporating Vision Zero strategies into the city’s Comprehensive Plan and the Pedestrian and Bicycle Implementation Initiative. Vision Zero means redesigning our streets, lowering speeds, connecting neighborhoods and providing road safety education and enforcement.

With over 450 collisions involving pedestrians and 15 overall traffic deaths in the last 10 years as a result of street collisions in Bellevue, the city’s adoption of this resolution is a critical first step.