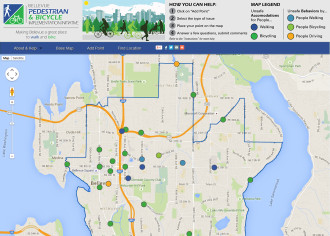 Bellevue is trying to identify and prioritize biking and walking safety needs, and they are reaching out for your help.

The Pedestrian & Bicycle Implementation Initiative (“PBII”) has launched a wikimap survey, which lets you go pretty in-depth in reporting challenges to safe cycling or walking in the city. You just drop a point on the map, then answer some survey questions describing the problem and what kinds of infrastructure or enforcement you think could help.

Earlier this year, Bellevue City Council launched the PBII, which is basically an effort to actually implement the city’s 2009 Pedestrian and Bicycle Plan.

“Rather than undertaking another multi- year planning process to update the plan, Council voted unanimously on February 17, 2015 in favor of initiating the Pedestrian & Bicycle Implementation Initiative (PBII)—a complement of action-oriented strategies to advance the projects and programs identified by the 2009 Plan,” reads the PBII document (PDF). 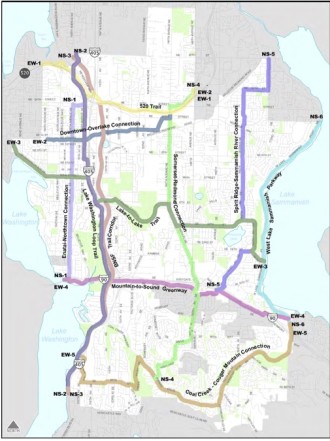 As the document notes, the 2009 plan was the product of lots of public outreach. Perhaps you were part of that effort? Or perhaps you are simply frustrated by Bellevue’s glacial pace for improving walking and biking conditions. What’s to say Bellevue leaders are actually serious this time?

Well, have faith and get involved! Passing this scope of work document is a sign that city leaders may finally be ready to get serious about fixing the many missing or inadequate sections of bike infrastructure. But it’s going to take serious grassroots effort and input from people who live, work and play in Bellevue to get past the cars-first inertia in the city’s streets.

But once the city gets rolling, it could go fast. With so many big streets with too many lanes that are too wide, Bellevue could implement a protected bike lane network way faster than Seattle if it wanted to.

OK, I got a little ahead of myself. First, Bellevue is going to create a series of technical reports and action plans analyzing how crashes in Bellevue happen, national and global best practices for preventing those crashes and a list of the top priority projects across the city. All this should be done in 2016.

And did I mention they will also come up with a bunch of ideas for how to fund the effort along with a budget proposal? Because none of this will go very far without funding.

All this comes as Bellevue is set to receive state funding to launch bike share. So the PBII also includes putting together a business plan for a Pronto expansion. In order for bike share to succeed, Bellevue needs to attract lots of rides by people who would not feel comfortable biking on the city’s streets today. But that’s an excellent guide for the city’s bike network improvements: It’s not really for the strong and confident people who are already biking (though it will also help them), it’s for the many more people who are intimidated by big, fast streets.

The program will be managed by Franz Loewenherz, a very earnest guy who works hard and is dedicated to walking and biking safety. I’m excited to see where this goes and can’t wait for action in 2016.

More details on the survey from Bellevue:

The city’s Transportation Department is asking the public to identify unsafe conditions or behaviors in Bellevue’s walking and bicycling network. Information gathered through a “wiki” mapping survey will be used to address locations where problems occur. Participate in the survey.

The online survey, which will be available through Oct. 31, allows users to locate a less than perfect spot on a map, describe and evaluate the issue using a menu of options, choose a solution, make additional comments and upload a photo of the location if desired.

The information eventually could lead to improvements. A broad cross-section of stakeholders and city staff will consider the input and develop action strategies to potentially address locations and corridors where problems frequently occur.

Mapping where people notice hazardous conditions or behavior is just one of the tasks identified in Bellevue’s Pedestrian and Bicycle Implementation Initiative.

The survey tool is meant to help transportation staff design facilities, develop education programs and deploy enforcement activities to address safety issues. It is not intended to replace the city’s MyBellevue mobile app and portal, which is used to report maintenance issues such as potholes, and to request services.

16 Responses to Vision Zero Bellevue? The Eastside city is crafting a plan + Take this wikimap survey