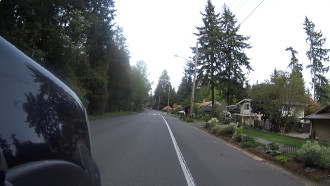 Still from the video. Police are looking for a black Ford F150, possibly with a license plate starting “D9”

Dan Scarf was in a pretty “mundane” part of his bike commute home to his wife and three kids on a street marked for 25 mph and calmed with speed humps when someone driving a black Ford F150 struck him hard and fled the scene without stopping.

“I’m really angry at the guy, and I’m just shocked,” Scarf said. “How could you actually do it?”

He caught the collision on a handlebar-mounted camera, but the video didn’t get a shot of the person driving or the license plate number. Scarf posted the video to YouTube (collision happens at the 2:00 mark):

There were witnesses, and Bellevue Police are investigating. Police are looking for a black F150 (a YouTube commenter says it could also be a Ford Expedition), possibly with a license plate starting “D9.”

Scarf called Seattle Bike Blog from the hospital to get the word out about the hit and run and tell his story. As you can see in the video, it was not raining and there was no oncoming traffic at the time.

“I was tracking with the sharrows, which is where you’re supposed to be,” said Scarf. The street has a parking lane, but it is typically safest to maintain a predictable position in the lane rather than weave in and out around each parked car. This path is marked with “sharrows” on this street. So Scarf was doing everything exactly right.

“Most people just move over, but this guy didn’t.”

The person driving veered into Scarf and sideswiped him. Its not clear from the video if the collision was intentional or not, but it certainly seems possible. Running from the scene, however, is intentional. It’s also cowardly and disgusting.

As painful and disruptive as his injuries are, it could have been worse.

“Frankly, I’m most disappointed that I’m gonna have to be off my bike,” he said. The doctors told him it would be at least six weeks before he could try biking again.

This hit and run comes just weeks after another hit and run in Bellevue that left Jane Kriehn in critical condition. In that case, there were no apparent witnesses, so the person who fled the scene left her to die in a ditch. She was found an unknown amount of time later and rushed to the hospital.

Kriehn has a long road to recovery, as her family told Q13 a few weeks ago:

People who injure other people and run away represent humankind at its most shameful. The only way to begin the road to redemption is to turn yourself in and take responsibility for what you did.

Founder and Editor of Seattle Bike Blog.
View all posts by Tom Fucoloro →
This entry was posted in news and tagged bellevue, dan scarf, hit and run, injuries, jane kriehn. Bookmark the permalink.