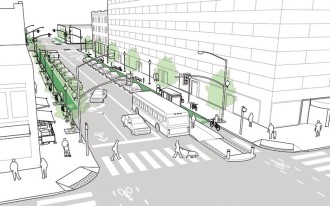 Imagine if 108th Ave NE in downtown Bellevue looked more like this. Concept image from NACTO

The City of Bellevue has endorsed the NACTO Urban Street Design Guide, joining an ever-growing list of cities in North America looking to pool their experiences and knowledge into a guide for more active, efficient and safe streets.

The city is moving forward, but its streets are looking backwards to an era when people walking, biking and using transit were considered secondary to cars. But a vibrant city and business environment requires streets that are safe and comfortable for everyone.

“In our work in Downtown and in other mixed use activity areas in the the city, our focus is on creating places for people that are safe, vibrant, sustainable and livable,” said Bellevue Transportation Department Director David Berg in his endorsement letter to NACTO. “It is my responsibility as Transportation Director to provide the tools to help my staff plan for, design and deliver transportation infrastructure that meets the multiple functions of our streets.”

Berg took the Bellevue position after Goran Sparrman left in 2011. Sparrman is now the Interim Director at SDOT as Mayor Ed Murray’s office searches for a permanent Director.

Bellevue is not Seattle, nor does it want to follow in its footsteps. That’s why now is a great chance for Bellevue to pie its neighbor in the face. Seattle’s endless delay in building protected lanes downtown leaves an opening for Bellevue to beat them to it. Seattle is just now in the very early stages of an outreach effort to come up with a plan to install a protected bike lane downtown in “two to five years,” according to Councilmember Tom Rasmussen.

Bellevue could build a protected bike lane through its downtown this year if its leaders want to. It would be a boon to bike commuting and retail in downtown Bellevue, and it would be pretty embarrassing to Seattle, which likes to talk a big game about its bike-friendliness but stalls progress in the face of nearly every big step.

Seattle is a US leader in bicycling, but that’s in large part because it had a head start over other cities. The number of cities working to unseat Seattle is growing. And as Rasmussen noted in a recent press conference about the Bike Master Plan, the pressure is “coming from surprising places, places with more severe climates than Seattle like Chicago and Minneapolis.” Washington DC is probably the best example of a city on Seattle’s heels, as our nation’s capitol was way behind Seattle in bike commuting just a few years ago, and is now poised to pass Seattle.

And maybe now Bellevue will add some pressure? The ball is in their court.