Only 5% of new downtown Seattle commute trips are made by driving alone, but biking is flat 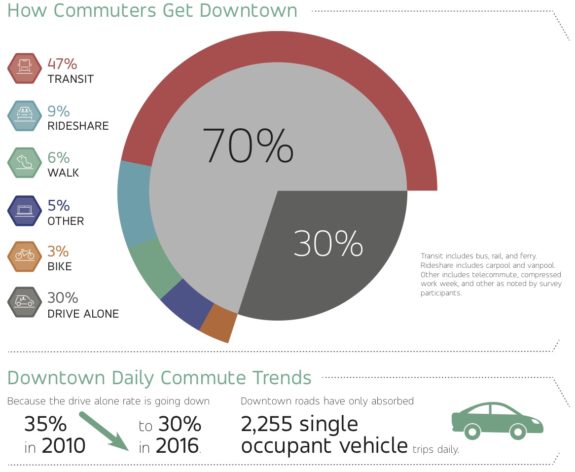 Downtown Seattle has added 45,000 jobs since 2010. During the same time, only 2,255 new drive-alone trips have been added to downtown streets, according to a new Commute Seattle survey. The other 95 percent of commute trips were absorbed by transit, walking, biking, telecommuting and shared car trips.

The survey, released every two years, suggests that efforts to increase and improve transit service and build more homes near jobs are working. It also suggests that downtown streets are basically at capacity for peak-hour car trips, a truth anyone who spends any time downtown during peak hours could tell you. We can add more jobs, but we can’t add more cars.

Transit is by far the biggest winner in the survey, drawing very close to reaching 50 percent of downtown commute trips (it’s currently at 47 percent, so it could reach half very soon). Transit absorbed a net of 31,000 of those 45,000 new commute trips, a combination of new commute trips and exiting commuters who switched to transit.

The survey was conducted between Spring 2015 and Fall 2016, so the data likely does not fully account for the Capitol Hill and UW light rail stations. 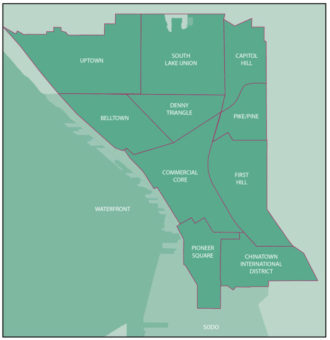 While the overall picture appears rosy (driving alone is at a modern low, making up just 30 percent of downtown commute trips), not all the data is positive. The number of people biking to jobs downtown has increased, but the bike mode share is flat at 3 percent. It’s not on a steep decline like driving alone, but biking is also not growing at the rate it could be.

Sadly, it’s no surprise that the city is not benefiting from biking the way it could be. None of the areas within the study area have complete bike route connections. If you want to bike to work to any of these jobs, you’re going to need to mix with heavy car traffic for some or all of your trip. And there are only so many people who are interested in doing that.

In fact, biking to these center city jobs may be more stressful today than it was in 2010 or 2012 due to rampant bike lane closures due to development and road construction. For example, there was a time when you could bike from the Fremont Bridge to downtown via Dexter and 7th Ave with very little mixed-traffic biking. Today, that seems like a dream because there is little or no effort to provide safe bike lane detours through constant construction zones.

Common knowledge says that if you build a bike lane, people will use it. Well, the inverse may also be true. When people’s bike routes are ruined by stressful or scary construction zones, some people are going to stop biking. At the very least, that ruined bike lane isn’t going to attract many new users.

We have argued that construction zones should be required to provide a temporary bike lane of comparable-or-better protection than the one being displaced. Safety must the be top priority for all road users. It is not fair or wise to force people on bikes to take on increased personal health risk in order to accommodate a private development or public road construction project. But that’s exactly what happens at some point of nearly every major bike route in downtown today, and it’s holding back the potential for biking to absorb new commute trips.

And as other cities are learning, that potential is massive. Below is how the National Association of City Transportation Officials demonstrates the capacity for multimodal streets. Seattle has a lot of downtown streets that look exactly like the one on the left. 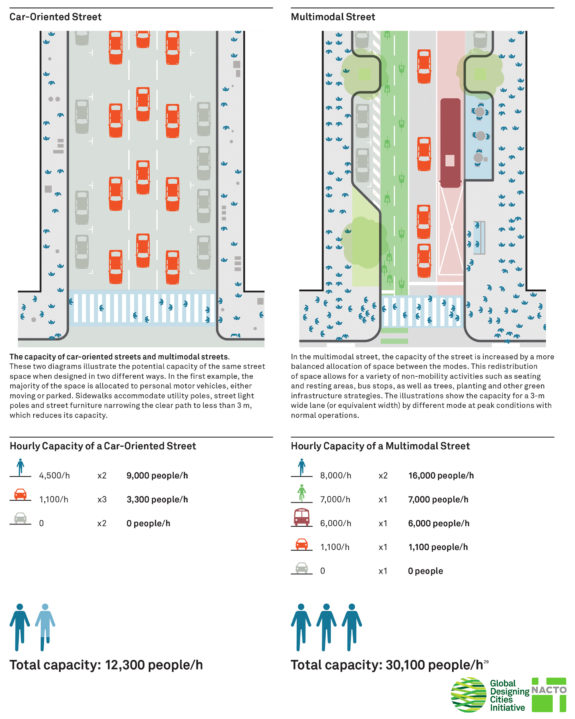 Of the few significant improvements to biking downtown since 2010, none of them are fully connected to each other or neighborhood bike routes. The 2nd Ave bike lane is great, but it doesn’t connect to any other bike routes. The Westlake bikeway is also wonderful, but there’s no good option for getting from the southern terminus to downtown jobs. Meanwhile, the city’s downtown bike network is still delayed. 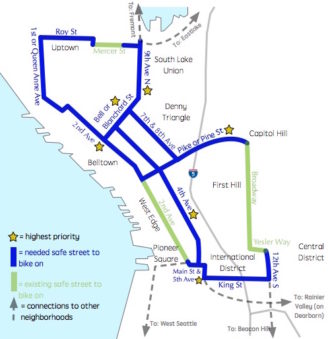 The good news is that the city has the ability to make up for lost time by implementing a connected “basic bike network” downtown in very little time. The bad news is that it’s not clear whether the mayor and other city leaders are going to make this a priority.

The Seattle Bicycle Advisory Board endorsed (PDF) the basic bike network idea in a letter to the One Center City team this month, citing the importance of connectivity in order to meet our biking and safety goals:

Without a network of connected protected bike facilities, bicyclists will remain the most exposed, at-risk users of the road. Seattle has invested in progressive bike facilities, but because they are often disconnected, they are limited in their impact on traveler safety. To get to Seattle’s new Protected Bike Lanes and neighborhood greenways on Westlake or Roosevelt, in Columbia City or West Seattle, bike riders must brave many of the more dangerous roads in Eastlake, First Hill, SoDo, and more. These gaps between Seattle’s promising bike facilities pose a threat to every rider and set the city back from its Vision Zero goals.

Founder and Editor of Seattle Bike Blog.
View all posts by Tom Fucoloro →
This entry was posted in news and tagged commute seattle, downtown. Bookmark the permalink.

22 Responses to Only 5% of new downtown Seattle commute trips are made by driving alone, but biking is flat