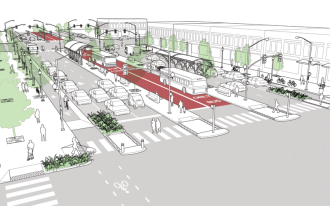 Washington State is the first state to officially back the NACTO Urban Street Design Guide, which provides best practice guidelines for designing complete streets that consider the needs and benefits of all road users, whether they are walking, biking, driving or riding transit.

This is a huge step for the state, which owns and maintains highways that also serve as commercial streets and main streets in cities and towns all over the state. In Seattle, for example, many of the most dangerous streets — such as Aurora, Lake City Way and parts of Marginal Way — are actually state highways.

While WSDOT and every other state DOT in the US typically designs highways following federal guidelines for high-speed roadways, endorsing the NACTO guide will give planners “more flexibility when designing elements of a project and can shift their focus toward the livability, economic and mobility needs of a community,” according to a WSDOT press release.

Washington Bikes’ Blake Trask, who has been working to encourage the state to adopt the guide, applauded the news: “These smart improvements to design, particularly along approximately 500 miles of state highways that pass through main streets, will be very helpful to spur economic development and improve the safety and accessibility in Washington State’s cities and towns, while saving taxpayers money. That’s a win-win for everyone.”

Seattle is not only one of 23 cities to endorse the guide, but SDOT planners helped write it. As a member of the National Association of City Transportation Officials (“NACTO”), the city has invested in studies of innovative and sometimes experimental pieces of infrastructure over the years, and that data has helped guide the best practices guidelines so other cities will not have to repeat that work.

It’s exciting that after Seattle took a leadership role in developing guidelines for modern safe streets in US cities, Washington State is looking to lead on the state level.

When is a highway not a highway? When it’s also a community’s main arterial that does more than just move vehicles through a corridor. It must function as a connector, providing local access to businesses, parking for customers and sidewalks and bikeways for people to travel.

In acknowledgement of that, the Washington State Department of Transportation is the first state DOT in the nation to officially endorse the new Urban Street Design Guidelines, a publication that focuses on the complex needs of city streets and making them work for everyone.

“We not only endorse this guide, we’re also working toward adopting it into our policies and processes,” said state Transportation Secretary Lynn Peterson. “This guidance supports our strategic planning and practical design emphasis. It also builds on local partnerships and encourages early collaboration to ensure we are considering a community’s unique transportation needs.”

The National Association of City Transportation Officials developed the guidelines as a vision for city street design that considers all modes of travel. The guidance is based on designs tried and proven successful in urban areas including New York City, San Francisco, Chicago and Houston.

Peter Hahn, Seattle Department of Transportation director, who sits on the NACTO Board of Directors and was one of 23 NACTO members who worked on this instrumental guide, commented he is “proud of his state’s DOT to be the very first state agency to endorse the guide.”

WSDOT typically designs roadways to meet national design standards for high-speed highways; those standards aren’t always a good fit for low-speed arterials. With the new guide, transportation engineers and planners will have more flexibility when designing elements of a project and can shift their focus toward the livability, economic and mobility needs of a community.

“Feet First applauds WSDOT for endorsing the Urban Street Design Guide,” said Feet First Executive Director Lisa Quinn. “WSDOT’s leadership shows that investment in street design principles and practices create safe and vibrant places for people of all ages and abilities to go by foot. The guide promises to be a vital tool to help shape important transportation decisions in our communities.”