There are (at least) three important bikey meetings Wednesday evening (tonight!), all at the same time. If you have time, swing by one of them and give your input to make bicycling in Seattle better.

A workshop at Garfield Community Center at 23rd and Cherry will give residents the chance to weigh in at a fairly early stage in the development of the city’s transportation budget. The more people can be there to make sure safety safety safety is the city’s top priority, the better the final budget could turn out.

And as NE Seattle Greenways put it on Twitter during a neighborhood meeting last night, not only is an investment in safety the right thing to do, it also makes financial sense:

After brief presentations of each department’s budget, constituents will have the opportunity to participate in small group discussions with Councilmembers, and to list their priorities for the featured departments. The summaries of those priorities will be reported to those attending the Community Budget Workshops. Each meeting will have three Councilmembers in attendance. Holding the meetings during the Spring will allow Councilmembers to take the information and encourage the Mayor to include it in the budget he proposes to the City Council in September. 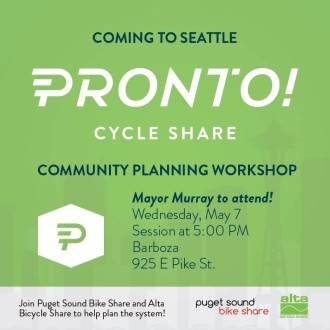 Pronto Cycle Share is coming to Seattle in September, leaders say. So now is the time to figure out where exactly the first 50 stations will be located, and they need your help.

The session begins at 5 p.m.

If you can’t attend the first workshop, there are several more throughout May, including one at noon Thursday downtown at GGLO (a good way to spend lunch). See details on the other meetings in this post.

Today is the first Wednesday of the month, and that means it’s the monthly meeting of the Seattle Bicycle Advisory Board. SBAB is a volunteer board of residents that advises city departments on issues as they relate to bicycling. Here’s the May agenda: 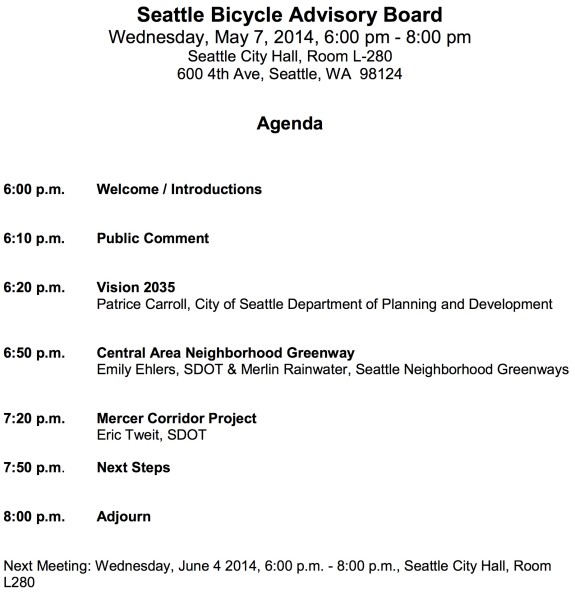