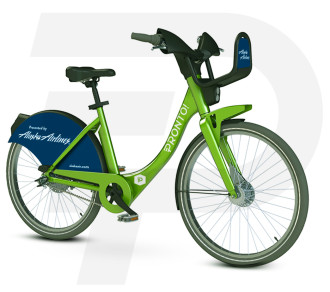 Pronto Cycle Share is on schedule to launch in September, bringing 500 public bikes into Seattle’s dense central neighborhoods and the U District. With its launch, Pronto could change the way people get around in Seattle and put city cycling within reach of far more people.

But this will not happen by accident. In this ongoing series, we will look at ways that Pronto, Seattle and King County can make sure bike share truly is a transportation tool for everyone. In part one, we’ll take a look at the bike commute gender gap.

While it’s hard to measure the exact gender gap in cycling, US Census surveys do provide a glimpse into commute data. Only looking at work trips (no errands, trips to a restaurant or park, etc), women represent only 28 percent of bike commuters in Seattle. This is a bit higher than the national average (24 percent), but is clearly not good enough.

In the Netherlands, more than half of bike trips are made by women. While it bothers me when people say women are an “indicator species” for a truly comfortable and safe cycling city (who wants to be described as a different “species”?), it is definitely true that if far more men bike in your city than women, something is wrong. After all, riding a bicycle to get around is not an inherently gendered activity, but local bike cultures can be.

Bike share may be one key part of the solution. As Josh Cohen reported recently for Crosscut, women use bike share systems in other US cities at a much higher rate than the Census survey’s commute rate. The national average is 43 percent (only counts registered pass holders, not daily users), and some cities have rates approaching 50 percent.

There are a great number of reasons why this might happen, but it’s a sign that launching bike share is a good way for Seattle to work towards closing its cycling gender gap. From Cohen:

According to Carolyn Szczepanski, head of the League of American Bicyclists’s newly launched Women Bike program, some of the most common barriers are: perceptions of safety and comfort in traffic and issues of convenience of riding while juggling the brunt of household responsibilities, including child care. And, she says there is a lack of a sense of community, caused in part by “looking out on the streets and seeing mostly men, many of whom are athletic and wearing gear that may or may not be something women are inclined to wear.”

She added, “Bike share bikes are engineered to fit the lifestyle of people who are using them. You don’t have to don’t have to worry about your pants getting caught or dirty, because there’s already a chain guard on there, there are already fenders on there. It’s a bicycle built for folks coming into the city, possible for work or wearing attire not in line with what people think you need to be on a bike.”

(Speaking of child care, this awesome bike share child seat has been making the rounds on the web recently. Though it clearly violates the DC system’s terms of use, there’s a big demand for this capability. Hopefully Pronto and Alta will work to allow such an attachment, if not at launch then in the future.)

Another factor will be marketing and the system’s image. Outreach efforts will need to focus on ease of access to everyone, and they will need to reach general audiences in hopes of attracting people of all ages, genders, races and income levels. As much as I’d love for Pronto to blow their whole marketing budget on Seattle Bike Blog ads, they need to make clear that the system is not about people who already bike everywhere. Pronto is for everyone.

Seattle is way ahead of the game in one very core and difficult-to-change way to make sure women are included in bicycling efforts: The leaders of nearly every big bike organization, including Pronto, are women.

What do you think Pronto can do to make sure it appeals to women as much as it does to men?