I talk 2nd Avenue with KUOW 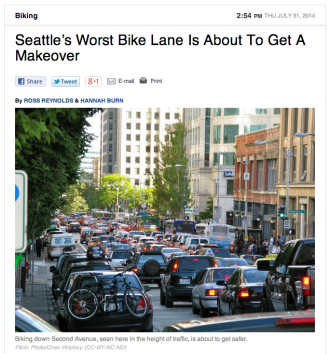 This morning, I had the opportunity to sit down with KUOW’s Ross Reynolds and producer Hannah Burn to chat about 2nd Avenue downtown and the city’s plans to build a protected bike lane there by September.

Burn actually took an audio recorder with her for a bike ride down 2nd the other day and chatted with a couple people about their experience biking on 2nd. No surprise, nobody finds it safe or comfortable.

You can listen to the segment online.

Reynolds told me after the segment that he might even give biking on 2nd a try once the protected bike lanes are in place. What do you think?

This entry was posted in news and tagged 2nd ave, hannah burn, kuow, ross reynolds, the record. Bookmark the permalink.

15 Responses to I talk 2nd Avenue with KUOW