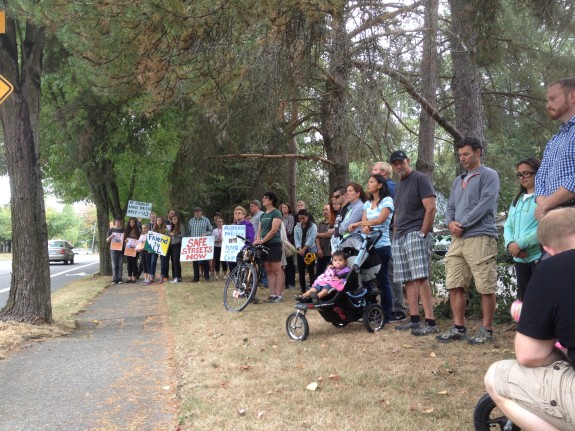 Carrying signs that say “Safe Streets Now” and “All Our Kids Are So Precious, Please Drive With Care” and wearing shirts that say “Caleb’s Got My Back,” friends, family and concerned community members gathered Wednesday to remember Caleb Shoop and call for safer streets in Kenmore.

Shoop was killed in March while biking in a crosswalk at NE 190th Street and 61st Ave NE. One car stopped to allow him to cross, as the law requires, but a second car in an adjacent lane did not. The person driving struck and killed Shoop.

Caleb was a volunteer for the Outdoors for All skiing program, showing that even at his young age of 19 he was generous with his time and efforts. He wanted to become a firefighter.

Unfortunately, Caleb is just one of several people who have been killed while walking or biking in Kenmore and the surrounding area in recent years. And the community has had enough. 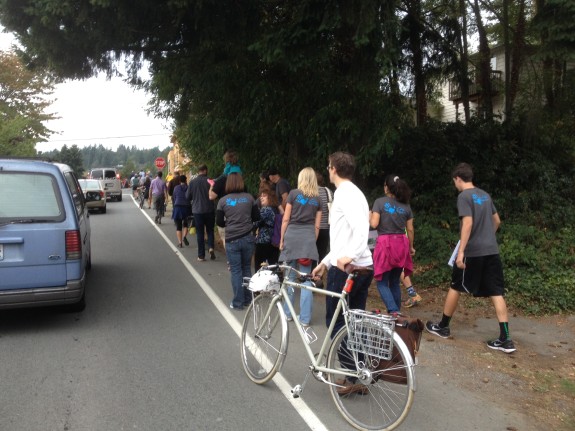 The very first street on the memorial walk had no sidewalk, a sign of the kind of work Kenmore has on its plate 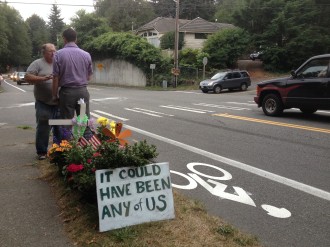 The City of Kenmore took action after Caleb’s death to make the crosswalk where he was killed safer, and changed the design of 61st Ave NE to a safer three-lane design with bike lanes. The city has also been working to develop a biking and walking plan, developed with the help of volunteers in the community who helped lead a committee to offer suggestions to prevent someone else in Kenmore meeting Caleb’s fate while simply trying to get around.

It’s hard to fully explain the strength shown by Caleb’s parents Tammy and Ben Shoop, who have persevered and pushed for action despite feeling a loss I find hard to imagine. They were there for the walk and the meeting afterwards listening to people’s ideas and urging city leaders to take action to make a real change.

Community members have also formed a new group called Connect Kenmore for Safety. If you live, work or play in Kenmore, you should join and get active. You can start by completing the city’s budget survey to make sure the safe streets plans get the funding they need.

The streets of Kenmore do not need to be dangerous. They were built that way decades ago, and the city can change them. It will take some money, sure, but mostly it will take the residents of Kenmore demanding an end to the senseless loss of lives like Caleb’s.

Kenmore would be a better city if Caleb were still here, but it’s too late to change what happened to him. But the city can make changes so nothing like that happens to anyone else’s son, daughter, mother, grandfather or best friend.

Family and friends are still hurt and angry over a decision by the contracted prosecuting attorney for Kenmore not to pursue negligent driving charges against Joshua Tucker, who received a $175 ticket for failing to yield at a crosswalk. Caleb’s mother Tammy recently wrote a letter saying that Caleb deserves justice. She’s right.

After the walk, there were discussions about whether the city should seek different counsel for its prosecution needs (Kenmore, like many smaller cities, are not large enough to have its own prosecutor on staff and instead contracts with private firms). Kenmore spokesperson Leslie Harris told Seattle Bike Blog that their prosecuting attorney Sarah Roberts “does not see enough evidence to charge the driver with negligence, and therefore the Vulnerable User Law penalties” in the case.

However, bike lawyer John Duggan (a SBB sponsor) sent a retort pointing out that Tucker violated a clear traffic law and received a ticket for it. That should be more than enough evidence of negligence. In fact, a situation like this is precisely why the legislature passed the Vulnerable User Law back in 2011. Roberts didn’t even try to pursue the charges.

Cascade Bicycle Club, Washington Bikes, State Senator Adam Kline, Duggan and others have committed to doing what they can to help educate police and prosecutors in the state about how to use the law, but the City of Kenmore could put pressure on private firms like that of Roberts to get serious about using the law by seeking representation from firms that share the city’s traffic safety priorities.

The traffic safety talks in Kenmore are not over just because the bike and walk plans are complete and the special committee has finished its job. They’re just getting started, and they’re not alone.

The walk was organized largely by Kirkland Greenways, a traffic safety group next door to Kenmore. Lake City Greenways and Seattle Neighborhood Greenways also helped, as did Cascade Bicycle Club, the active residents of Kenmore, the Church of the Redeemer and Caleb’s friends and family.

For more on the walk, see this King 5 video: