This City of Kenmore has decided not to pursue negligent driving charges against Joshua Tucker, the person who struck and killed Caleb Shoop as he biked across a crosswalk in March. Tucker received a $175 ticket for failure to yield at a crosswalk.

The VUL, passed in 2011, was designed to create repercussions reaching further than a simple slap on the wrist when people driving make a mistake and kill or seriously injure a person on foot or bike. Previously, if the mistake was not enough to warrant serious criminal charges, the people responsible would just get a ticket and be sent on their way. The VUL was supposed to change that.

Bike attorney John Duggan disagrees with the city’s decision, noting that the citation for failing to yield is more than enough evidence of negligence to bring the Vulnerable User Law into play.

“This horrible tragedy is exactly the situation envisioned when our legislature passed the VUL,” Duggan wrote in a memo to Kenmore attorney Sarah Roberts on behalf of the Shoop family (see full memo below).

The fact that Kenmore is not pursuing the second degree negligent driving charge created by the Vulnerable User Law raises serious questions about the law’s efficacy and/or the justice system’s ignorance of how to use it or reluctance to do so. If the law is not used in this case, then what is the point of even having it? If it’s not a problem with the law itself, then why isn’t it being used more often? Sadly, it’s not for a lack of traffic tragedies.

We will look deeper into the problem with using the law in a follow-up story.

Here is the statement from Kenmore:

After careful review of the law and facts of the case, the King County Sheriff’s Office and the City’s prosecuting attorney have concluded that the case involving Caleb Shoop does not rise to the level of negligence; therefore, the Vulnerable User Law cannot be applied in this particular case.  In order for the penalties outlined in the Vulnerable User Law (RCW 46.61.526) to be applied, the prosecutor must be able to demonstrate and prove negligence. Given the facts of this case, and from a thorough review of those facts applied to the law, the prosecutor does not see enough evidence to charge the driver with negligence, and therefore the Vulnerable User Law penalties.

The City of Kenmore takes this tragic accident and other recent accidents very seriously. We have implemented a number of measures to improve both pedestrian and bicycle safety, including awareness and education for both motorists and bicyclists. One example of these measures is the installation of approximately 11 pedestrian-activated rectangular rapid flashing beacons at arterial crosswalks with no mainline stop control.

Here’s the response from John Duggan (who is a Seattle Bike Blog sponsor): 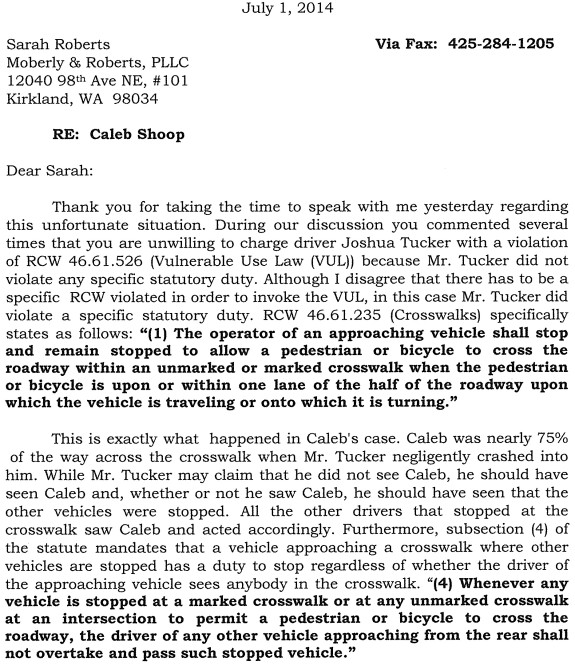 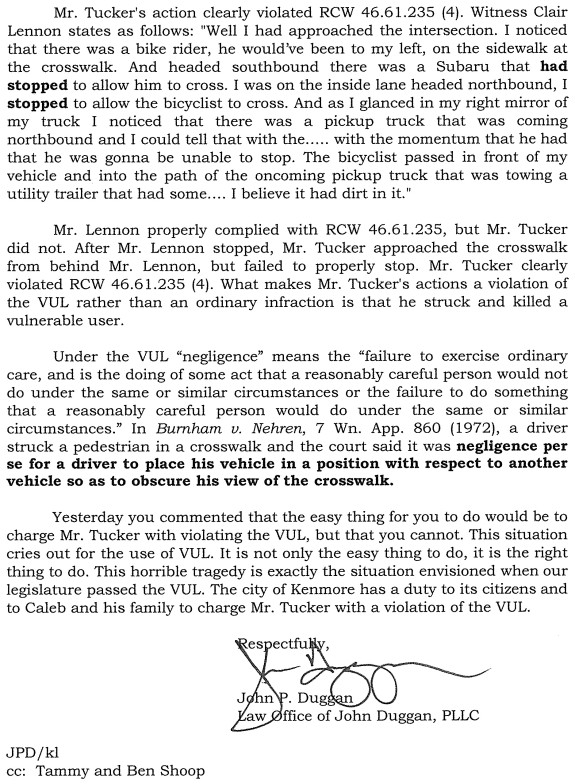