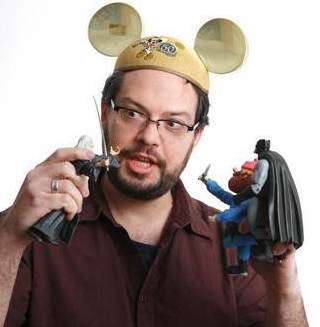 Prosecutors for the City of Kirkland will not pursue any charges against the woman who struck and killed Kyle Warnick while he walked his dog in a city crosswalk September 15. He was 43.

On a YouCaring page, family members describe Warnick as a story teller:

Kyle was one of a kind.  His love for life was . . . well simply amazing! He embraced all aspects of life.  Kyle loved to weave a good story.  He was a true “Story Teller” and used his story telling talent in most everything he did from presentations at Microsoft to sitting around a campfire at a boys scout outing.

Kyle always had a smile as wide as the sky and when he laughed, it was truly contagious so we all joined in.  He was one that didn’t mind putting himself out there just to make others smile and laugh.  We shall miss Kyle dearly and will remember him always.  We will see his essence in many things that we say and do.  We ask for continuous prayers for all who have been touched by Kyle.

Even though the woman driving, who was 57 at the time, failed to yield to Warnick while he was walking his dog in a crosswalk, prosecutors declined to pursue the Negligent Driving charges created by the state’s Vulnerable User Law because “while a very tragic accident occurred, the City does not believe that we can prove Ms. [REDACTED] failed to exercise ordinary care or acted in a manner that a reasonably careful person would not have under the same or similar circumstances,” according to a letter to investigators by Blakeley Warbinton, Assistant Prosecuting Attorney.

“She indicated she never saw the pedestrian.” 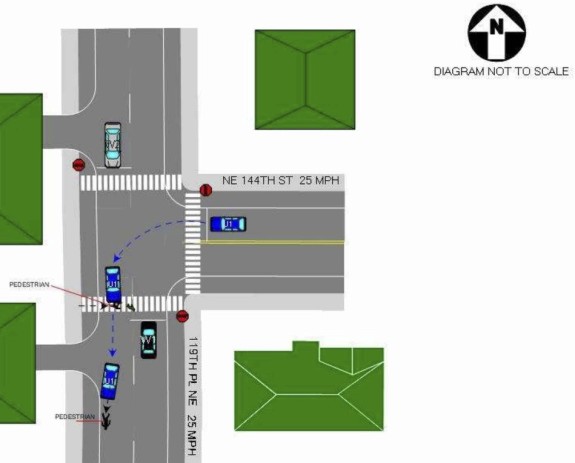 Collision diagram from the police report.

Of course, it is her responsibility to see other road users before running into them and killing them, and failure to do so seems like cut-and-dry negligence. If she had seen him in the crosswalk and chose to kill him anyway, we would be talking about felony Vehicular Homicide charges right now.

Investigators say she was making a left turn from NE 144th St to 119th Pl NE when “something unknown hit her windshield.” She stopped, throwing Warnick 15 or 20 feet to the pavement. This does not appear to be a particularly confusing or unusual three-way stop intersection (this post on the blog A View From The Crosswalk has a good on-the-ground look at the intersection and how the collision happened). But if people can be so easily killed without anyone being legally at fault, something is terribly wrong.

Investigators reenacted the circumstances using a similar Toyota Prius at a similar time of day and determined that “it was difficult to see the pedestrian due to the “A” pillar of the Toyota.” Even though we all learn in driver’s ed class that it is our responsibility to check our blind spots, the prosecutor used this vehicle blind spot as further reason to believe that there was not enough evidence to pursue Negligent Driving charges.

Remember, Negligent Driving in the Second Degree is not a felony crime. It was designed for situations exactly like this one, where someone makes a traffic error that has a horrendous impact on a more vulnerable road user. The penalties could be fines or a suspended license or driver education or community service, and the mix is essentially up to the sentencing judge. The law was designed to make sure there is at least some consequence for killing or seriously injuring someone on the roads, even if the person responsible did not commit a much more serious crime like Vehicular Homicide or Assault.

But the prosecutor is basically saying that any reasonably careful person would have killed Kyle if they were in her driver’s seat, or at least that the prosecutor does not have enough proof to pursue a charge alleging otherwise. Here’s how the prosecutor outlines the issue in a letter to investigating officers:

RCW 46.61.525(2) defines “negligent” as “failure to exercise ordinary care, and is the doing of some act that a reasonably careful person would not do under the same or similar circumstances…” Based on the police reports and our conversations regarding the investigation completed by you and the Kirkland Police Department, we would not be able to prove that Ms. [REDACTED] failed to exercise ordinary care.

So in this prosecutor’s eyes, breaking the law requiring people to yield to crosswalk users is not itself proof of negligence. This implies that reasonably careful people are allowed to break this vital traffic safety law, which protects the exact “vulnerable users” the Negligent Driving charge is intended to address. This is a disturbing reading of the law, but one we have sadly seen before.

Prosecutors also declined to pursue Negligent Driving charges against the person responsible for striking and killing Caleb Shoop in a Kenmore crosswalk in March 2014. Attorney (and Seattle Bike Blog sponsor) John Duggan wrote a letter to the City of Kenmore arguing, “While Mr. Tucker may claim that he did not see Caleb, he should have seen Caleb…”

What needs to change in order for the intent of the Vulnerable User Law to go into effect? It seems clear to me and attorneys like Duggan that a road violation like “Failure to Yield” is itself evidence of negligence, yet two prosecutors in neighboring cities have declined to pursue such cases. Do cities just need more training on how to use it, or do we need to adjust the wording of the law? Because this process only makes a terrifyingly painful situation worse for victims or, in the worst cases, their surviving family and friends.

I cannot imagine how terrible and unjust it must feel to lose a loved one, then be told that the person responsible won’t even have their license suspended or have to go to traffic school or do community service or pay a fine. Nothing.

We’re not talking about jail time here or requiring people to reveal felony convictions to employers or anything that tough. We’re just talking about some consequence and a chance for the person responsible to begin to pay their debt to society. I think many responsible people, traumatized by what they did, might even welcome a chance to start paying that back. I don’t imagine it feels very good to “get away” with killing someone.

A broken Vulnerable User Law system — whether it’s the fault of the prosecutors or the law wording itself — is not helping anyone.