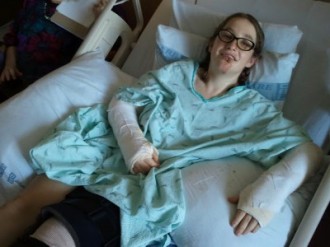 Image of Heather, via Cascade

Two years ago, the primary focus of bicycling interests in the state legislature was to pass a bill that would create a penalty for negligent driving that results in a serious injury or worse.

The Vulnerable User Law has been in place for almost a year, but it is rarely used and, as Cascade Bicycle Club’s Anne-Marije Rook reports today, many in law enforcement seem not to be aware of how it works.

Rook’s story focuses on the case of Heather Barnett, who was seriously injured when an SUV ran a stop sign and struck her in Ballard last September. Barnett and her boyfriend Josh had to fight hard and hire a bike lawyer (Seattle Bike Blog sponsor John Duggan, in fact) to get law enforcement to file the citations and charges she needs to get back on her feet and recoup her losses.

While that court battle is still pending, her struggle highlights a troubling gap in the enforcement of the VUL.

Once they were able to get a hold of the officer, they asked her about the lack of citation. The officer explained she was not familiar with the Vulnerable User Law but after revisiting the accident report, she was eventually willing to write a failure to yield citation.

“The [Vulnerable User] law is there but I’m under the impression that no one knows about it. It shouldn’t be up to the victim to enlighten law enforcement about this law,” [said John Duggan].

Now on a mission, Josh went up the chain of command and reached out to the City Attorney’s Office.

“We spoke to with Assistant City Attorney Mindy Longanecker who  felt it was a serious enough case that the police should turn it over to traffic investigations and wanted to go ahead with the Vulnerable User charge,” said Heather.

On Jan. 25, the City Attorney’s Office filed charges against the driver, including failure to yield, driving without insurance and a negligent driving in the second degree vulnerable user charge. Combined, the fines add up to $11,184.00.

“It’s been a really bizarre adventure,” continued Heather. “And it’s been a lot of effort on our – the victim’s – part. We wouldn’t be getting anywhere if he hadn’t pushed so hard. Josh went above and beyond to put pressure on to get some kind of outcome.”

The fight is far from over. A court dismissed the second-degree negligent driving charge (made possible by the VUL) in February, though the city is appealing the decision.

14 Responses to Cascade: Law enforcement is often unfamiliar with the Vulnerable User Law