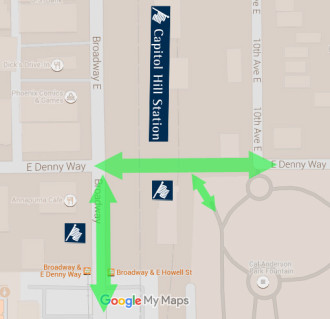 Closed for years to build Capitol Hill Station, this section of Denny Way opens a vital low-traffic bike route connecting Broadway and the western part of the neighborhood to Cal Anderson Park and calm neighborhood streets east of Broadway.

Due to the park’s limited bikeable access points and Seattle Central College’s multi-block campus, Denny is the first complete bike connection north of Pine Street. So while opening this one block may not seem like all that big of a deal on a map, on the ground it’s a huge improvement, especially for people trying to avoid the very busy Olive Way/John Street. To date, the Broadway Bikeway has effectively been a local-access-only dead-end north of Pine unless you are comfortable mixing with busy traffic on John/Olive or north Broadway. But not anymore. 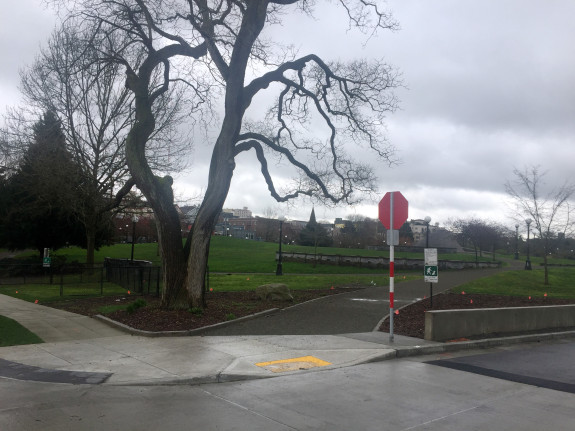 The newly-opened street also includes this high-quality access point to the northwest corner of Cal Anderson Park, making all the gravel bike connections through the park that much more useful. 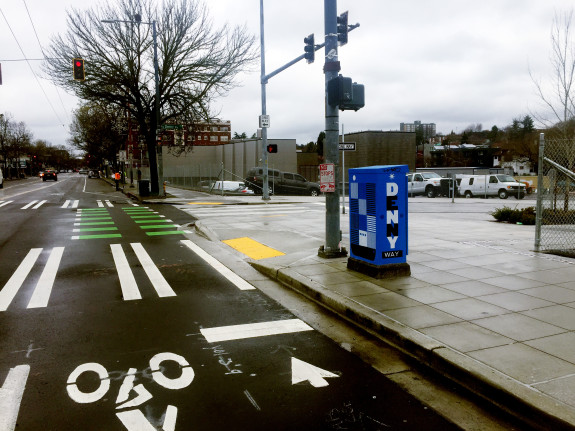 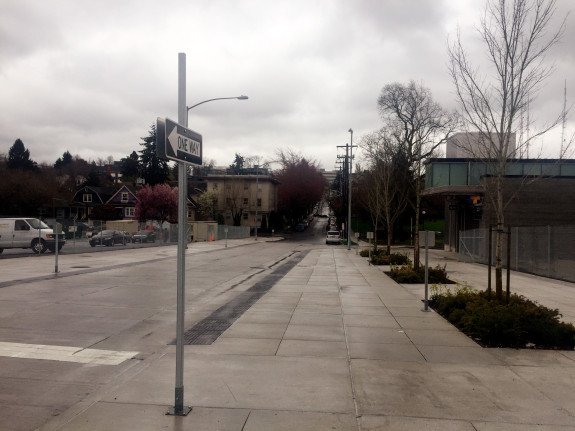 The block of Denny between Broadway and 10th is one-way westbound, and there is no clear preferred bicycle path. As it is, the extra-wide sidewalk space will likely become a popular biking route. In lieu of a contra-flow bike lane, perhaps a simple “EXCEPT BICYCLES” addition to these signs would help clarify that people biking can use this connection eastbound. Or, of course, we could just make the whole block biking and walking only.

I should note that though the dark textured street divider may look like a curb in the photo above, it’s actually flat and safe to bike over. So people biking can switch between street and sidewalk space easily if need be. 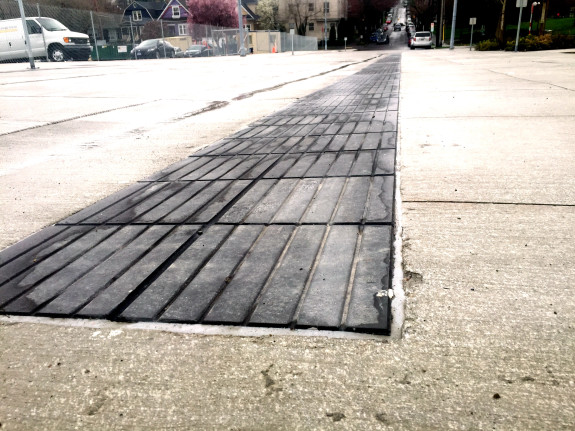 However, more needs to be done to discourage eastbound car travel, or this people-friendly connection could quickly become a popular car cut-through. You don’t have to hang out long to see someone blatantly ignore the many one-way signs: 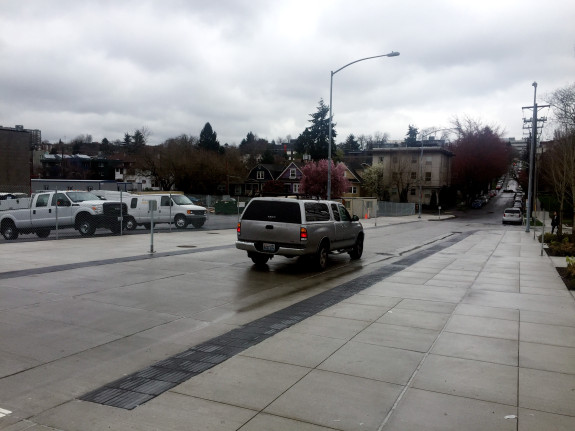 Travel patterns in this whole area are going to change dramatically when Capitol Hill Station begins service March 19. And in years to come, major transit-oriented development will continue to shape the space. The Broadway Farmer’s Market plans to move to this block, and city plans for the Madison BRT project show a neighborhood greenway on Denny from Broadway to 22nd Ave (PDF).

The city’s short-term bike plan includes an extension of the Broadway Bikeway from its current terminus at Denny to Aloha (though a draft update of the plan presented to the Seattle Bicycle Advisory Board bumped this project from 2016 to 2017). A possible streetcar extension is also looking at financing options based on nearby property owner support.

This station and particularly this block of Denny is now at something of a nexus of neighborhood bike routes for Capitol Hill, making it vital that bike access is prioritized in all planning efforts.

More immediately, this block is also the best possible place for a Pronto bike share station. Let’s hope the City Council not only does the right thing by authorizing the Pronto buyout March 14, but that Pronto, Sound Transit and the city all work together to have a station here operational in time for the U Link party March 19. That way the crowds of people who show up to check out the new stations can also see how Pronto can be a convenient way to access them.

Years of work and planning are all finally coming together. This is going to be an incredible month for biking, walking and transit on Capitol Hill.