Incredible weather and later-than-usual start time drew a record-breaking number of people to the 2013 Fremont Solstice Parade and the legendary Solstice bike ride that comes before it.

I cannot begin to give an accurate estimate of the number of people who stripped down, painted their bodies and hopped on their bikes for a remarkable and joyful tour of Ballard and Fremont Saturday. If I were to guess, I’d say at least 1,000 people and maybe as many as 1,500 (if anyone has a more accurate count, be sure to post in the comments below).

And, of course, that means many of the riders took part in the Seattle tradition for the first time. During the staging of a group photo with hundreds (though not all) of the painted riders at Ross Park, an organizer asked the group who there was riding for the first time. Half of the participants raised their hands, a sign that the appeal of the Fremont Solstice bike ride is still growing rapidly from the small handful of riders who started it in the 1990s.

So many people participated this year that never-before-seen naked traffic jams were constant throughout the ride route. The ride marshals tried to keep things in order as they have in previous chilly and drizzly years, but the dramatically larger numbers of both participants and spectators seemed to overwhelm the plans with chaotic, jam-packed painted and naked people on bikes.

In short, it was awesome.

After the ride and parade, people gathered in Gas Works Park. There were bikes and painted people everywhere: At the top of Kite Hill, swimming in Lake Union and drinking beer in the Honkfest West beer garden. 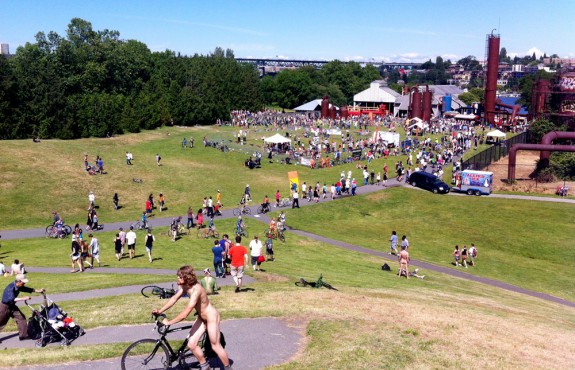 Below is an non-curated and NSFW gallery of photos from the day, via Flickr:

Founder and Editor of Seattle Bike Blog.
View all posts by Tom Fucoloro →
This entry was posted in news and tagged fremont solstice parade 2013, nsfw. Bookmark the permalink.