Mayor Durkan is right, we do need a ‘reset’ on Move Seattle 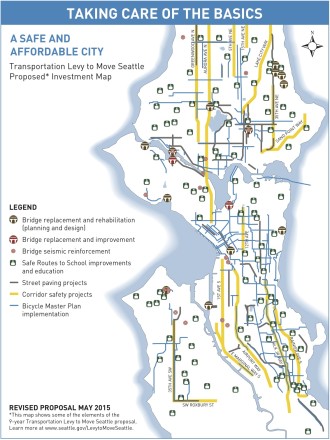 This Move Seattle map shows the clear focus on transit, biking, walking and maintenance that voters approved in 2015. Seattle’s leaders need to get back to this vision.

As regular readers of Seattle Bike Blog know, I have been on family leave since late January following the early birth of my daughter. So unlike the daily news regimen I have reported since 2010, I have not had the bandwidth to post about some major local transportation stories as they have happened. It’s been hard to follow the news and not be a part of it.

But maybe taking a step back and looking at the big picture around Seattle transportation would be helpful right now. Mayor Jenny Durkan and Interim SDOT Director Goran Sparrman are calling for a “reset” of Move Seattle to recognize the likelihood of less Federal funding than was assumed under the levy proposal.

I agree that we need a Move Seattle reset, though not in the form of big cuts targeting walking, biking, transit and safety projects as has been the pattern so far under Mayor Durkan. Since passage of the levy, our city’s transportation actions have drifted far off course from the transit, walking, biking, safety and maintenance mission voters approved in 2015. What we’re doing now is not working. Our city needs strong leaders with a creative vision to figure out how to get the job done even if the Feds don’t come through as originally hoped.

But a reset should not mean abandoning the extensive walking, biking and transit master plans that took years to develop, were approved by City Council, and were funded by the voters. Nor should it mean abandoning the city’s Vision Zero plan or the multi-agency One Center City plan for downtown. It may be true that the methods for accomplishing the goals in these plans needs to evolve — either due to funding or because there are better ideas — and that’s where the mayor can step in and be a strong leader.

The Move Seattle levy may be the most ambitious local transportation funding package voters have passed in any U.S. city. $930 million over nine years, and almost all the funding was earmarked for transit, walking, biking and maintenance of existing assets. To pass a levy of this scale with very little funding for new or expanded roads and highways marked a big shift in the city’s transportation vision. The voters were clear in November 2015 that they believe walking, biking and transit are the future in Seattle, and they are willing to pay hard-earned cash for it. City leaders must deliver what the people of Seattle are paying for. 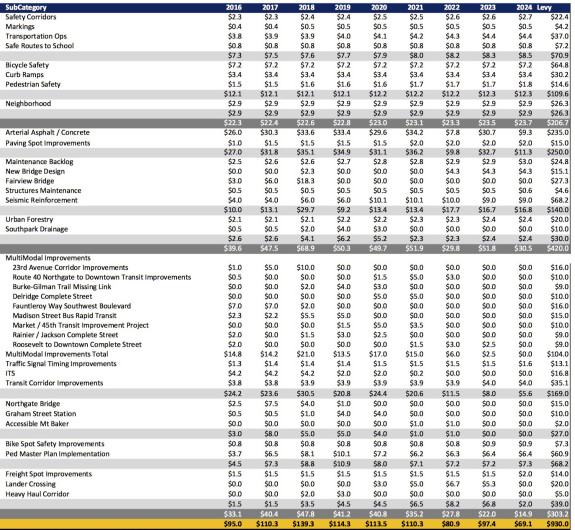 But since the levy passed, our (many) mayors and SDOT leaders have lost that vision. With the Center City Streetcar now paused, the biggest levy project funded so far is the Lander Street Overpass, a cars and freight project located just blocks from Sodo Station that prioritizes extra traffic lanes over walking and biking. This project is the closest thing to a new or expanded road in the whole levy, and it got expedited years early and was given a pass by SDOT staff and city leaders despite concerns that it is missing both a bike lane and a sidewalk on its south side. This project as designed does not resemble the goals and vision of Move Seattle, yet it has been fast-tracked while transit, biking and walking projects are delayed.

Another early major Move Seattle investment was the so-called “intelligent transportation systems program” on Mercer Street that has slowed buses and people biking on cross-street routes and caused serious harm to walking mobility and safety in South Lake Union and Uptown. By reprogramming signals to take time away from cross-streets and people walking, this project has stolen mobility from people outside of cars in a futile effort to make driving on Mercer a little less terrible. This project represents the exact opposite of the Move Seattle vision voters approved in 2015 (we need a leader who will identify this failure and dedicate funding budgeted for future ITS projects to fully redo the Mercer signals to prioritize walking).

Meanwhile, mayoral and SDOT leaders have cut or seriously delayed the bold promises about a downtown bike network and rapid bus upgrades that inspired voters. The levy was sold with images of truly multimodal streets like this one:

We were supposed to reprioritize streets all over the city with walking, biking and transit in mind. The map at the top of this post shows safety projects at every public school, a safe and comfortable bike network downtown and across the city, and “multimodal corridor projects” along major commercial streets in every neighborhood. This is what people voted for.

Yet so far, cars-first projects are moving forward while many walking, biking and transit projects get delayed, cut or watered down beyond recognition. SDOT staff behind many of the multimodal corridor projects in planning so far (Madison, Delridge, Rainier) have been pitting transit against bikes in a cynical ploy to cut bike lanes while still appearing to have tried. Car parking was deemed more important than bike lanes on a Rainier Ave safety project from Columbia City to Rainier Beach. Many of the city’s neighborhood greenways are uselessly windy or hilly, and two of them (Delridge and Central Seattle) even have staircases that make them literally unbikeable (that’s right, they are unbikeable bike routes). The 24th Ave so-called “Vision Zero” project has cut essentially all the safety and transit improvements despite finding a significant history of collisions on that street. The Fauntleroy Boulevard project, which would make big biking and walking improvements to the entrance to the Junction, has been effectively cancelled. And the final phase of a safety project on 35th Ave SW has been cancelled after an initial phase effectively eliminated serious injury and fatal collisions on the street. Phase 1 has quite possibly saved lives and prevented a half dozen or so serious injuries, but city leaders are apparently not in the mood to save even more people from “I-35” traffic collisions.

The sum of all of this is pretty demoralizing, especially all the cuts to safety projects. For a visual of how far behind the city is on its downtown bike lane promises, for example, the Spring 2015 update of the city’s bike facilities construction plan foresaw this for central Seattle by the end of 2018: 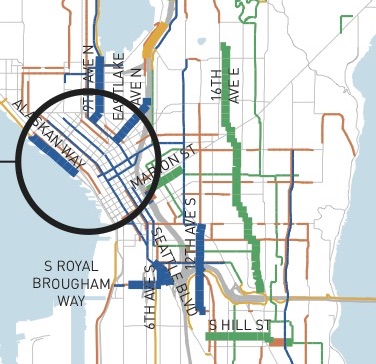 In this plan, 4th Ave already has a bike lane, Pike and Pine bike lanes already stretch from Pike Place Market to Broadway, and there are already connections to south end bike routes. But in reality, there are zero quality connections to the south end, the Pike/Pine bike lanes downtown are very short and essentially nonfunctional in places, and Mayor Durkan recently announced that she will delay the 4th Ave bike lane into the next decade.

Basically, the city is about two years behind on a downtown plan it created three years ago when it was seeking voter support for Move Seattle. After winning that support, the city bailed on those promises citing the need for yet another plan: One Center City. We argued hard against that delay, and people even protested at City Hall, but the mayor’s office was insistent that the bike network would get back on track once the One Center City process recommended them. And now that One Center City has recommended bike lanes again, Mayor Durkan has signaled that she is going to bail on those promises anyway.

The political cost of bailing is immense. There is a huge amount of positive energy in this city ready to back bold changes to the way our streets work, but further delays and cuts to major commitments are alienating these would-be supporters. Without prompt action to show that Mayor Durkan is serious about building a downtown bike network, people are going to harden into political enemies. Mayor Durkan’s term may still be young, but the work for these downtown bike lanes has been dragging on for three years.

Shortly after announcing that she would delay the 4th Ave and Pike/Pine bike lanes into the early 2020s, Mayor Durkan announced a congestion pricing plan for downtown. This is a massive proposal, the kind of idea that could revolutionize transportation and the streetscape in Seattle forever if done right and equitably. But the groundswell of community support such a proposal would need to make it through the strong and expected backlash was still reeling from the betrayal of watching years of promises broken. The result is a mayor flapping in the wind, vowing to toll everyone who drives into her city with few people to back her up and cheer her on.

Without strong and organized community support behind her touting the benefits of such a system (less congestion, more funding for better transit and safer streets, more options for car-free streets, etc), her plan is doomed, and she will lose credibility as a transportation leader.

It is still very early in Mayor Durkan’s term, and she has plenty of time to turn things around. A Move Seattle “reset” could be a great way to frame that effort. So far that reset seems to mostly mean cancelling or delaying biking, walking and transit projects, which is troubling. Because in order to build the support she needs to make transportation or climate change progress, Mayor Durkan needs to rebuild a coalition of walking, biking and transit supporters like the one that passed the Move Seattle levy.

People need to see that Mayor Durkan is serious about taking action on the big transportation plans the people of Seattle have painstakingly developed and funded over the past half decade. People also need to know that the resources behind any projects cut or delayed are being reinvested in an equal or better way. And those reinvestments need to happen on the same timetable so we don’t fall further behind on our goals. In order to inspire transportation supporters, she needs to do something inspiring. (Here’s one idea.)

There is an enormous amount of potential for Seattle to be a national leader in the shift to more sustainable, efficient, equitable and healthy transportation during Mayor Durkan’s term. The city has the plans and the funding. The mayor should be cutting ribbons, not bike lanes.

27 Responses to Mayor Durkan is right, we do need a ‘reset’ on Move Seattle