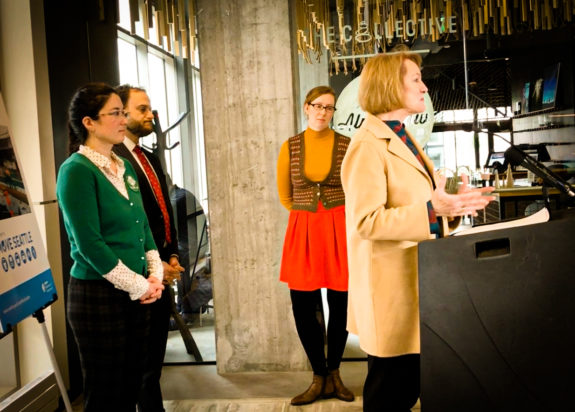 Mayor Jenny Durkan removed all doubt about what she thinks about Eastlake Ave bike lanes during a mid-day press event today.

“Without prejudging what would come out of an EIS or what the lawyers would say, we need that bike lane,” she said in response to a question from Heidi Groover at the Seattle Times. “From the north end to downtown Seattle there are only a few routes you can go on, and so Eastlake is moving forward.”

Mayor Durkan was speaking at a press event celebrating the completion of several downtown bike lanes recently (more on that coming soon), but her Eastlake statement definitely got the biggest applause.

As we reported last week (and then rambled on about for more than an hour in a video), Eastlake Ave is the most controversial segment of the major RapidRide J project, a rapid bus and multimodal street remake of the corridor between Roosevelt Station and downtown. Because the project is receiving significant Federal funding, the Federal Transit Administration and SDOT have released a required joint environmental assessment outlining the options they considered for each part of the project and selecting a preferred option, which includes bike lanes.

SDOT anticipated pushback on Eastlake because adding protected bike lanes would remove a lot of parking on the street, so they conducted an exhaustive 100-page report (longer than the environmental assessment for the entire project) looking at nine different options for building a bike route along the project corridor. And the bike lanes are just the only option that is complete, makes regional bike connections and serves neighborhood destinations.

District 4 Councilmember and Transportation Committee Chair Alex Pedersen attended a town hall meeting conducted by the Eastlake Community Council last week, and bike lane supporters packed the place. During the meeting, Pedersen didn’t support the bike lanes, but he also didn’t suggest he was going to fight them. This probably left everyone frustrated, but it’s a win for the bike lanes because they are in the designs now.

🚲 🚎👨🏾‍🦯🧑🏾‍🦽
Thanks to all the volunteers & community leaders who sacrificed to come out tonight to a frustrating meeting. I loved meeting all of you!
DM if you want to catch up in the next month – Laura
💜 @WelcomeEastlake @WelcomingWally @CascadeBicycle @sharethecities pic.twitter.com/jaVI7TsiqD

It was already a long shot to get them removed at this point in the process, at least through political channels. And people wanting to build political support to block them needed the mayor on their side. So her unequivocal support is a big deal. Here’s hoping it doesn’t end up in court like some other major bike projects have.

The biggest threat at this point is probably the Feds. The funding is supposed to come through, but you never know with this administration. I suppose that’s one more (comparatively minuscule) reason to make sure that guy loses in November.