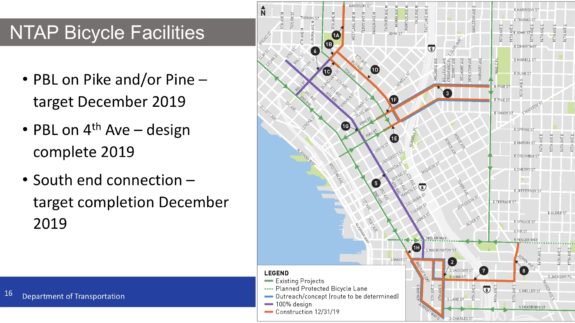 From a March 19 presentation to the City Council Transportation Committee (PDF).

SDOT will update the City Council Transportation and Sustainability Committee today on the progress (or lackthereof) on the downtown Basic Bike Network.

The City Council passed a resolution last summer calling on SDOT and Mayor Jenny Durkan to complete key sections of the downtown bike network by the end of 2019, including Pike/Pine, 8th and 9th Avenues, King Street, a south downtown connection and a segment of 12th Ave (see the resolution’s bike lanes in orange in the map above). The presentation notes that Pike/Pine and a south end connection are on target for December (so, as late as possible to meet the resolution), but does not include an update on the rest of the projects.

UPDATE: SDOT’s Jim Curtin told the committee Tuesday that the city had reached a “breakthrough” on 8th and 9th Avenues that will allow construction to start in the third quarter of this year. The biggest hangup for building the south downtown connection is Metro bus layover space, he said. And he noted that the stretch of 12th Ave between Yesler and King “will be very difficult.” You can watch the update via Seattle Channel (starts around the 34:20 mark).

The mayor and SDOT have nearly stopped building bike lanes, especially downtown. The only downtown bike lane to open under Mayor Durkan’s watch was already under construction before she took office. The City Council’s resolution last summer was essentially an attempt to remind her that the bike network is a Council and voter-approved priority. After years of bike network delays, SDOT would need to dramatically increase bike lane construction to catch up to the progress promised to voters who approved the Move Seattle levy.

The Mayor has already blown her chance to have a downtown bike network in operation before the city’s major transit and highway changes began earlier this year. The plans, funding, Council and voter support were all ready, but she chose to stop it. Even without a bike network, biking helped absorb a lot of trips during the initial Viaduct closure. This happened because neighbors got organized and people took it on themselves to bike despite her administration’s clear disinterest in helping people do so. And now that buses are due to be kicked out of the transit tunnel, another transportation crunch is about to begin. And once again, the mayor will have done essentially nothing to help more people shift to biking.

Has the number of people biking during these downtown transportation crunches inspired the Mayor’s Office to rethink their anti-biking stance? Will they rise to the challenge the City Council unanimously set last summer by building a connected skeleton of a downtown bike network by the end of 2019?