Bike counts were way up on first day of SR 99 closure, and West Seattle neighbors deserve a ton of credit 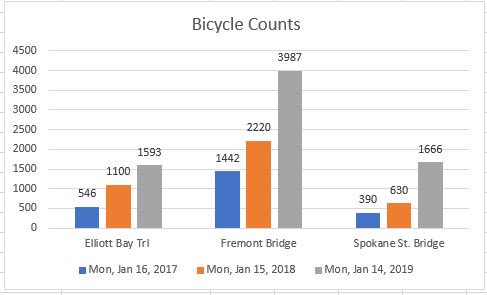 The bike counter at the foot of the Spokane Street Bridge to West Seattle measured a 327 percent more trips Monday than seen at this time of year previously. The counter has only measured more trips in a single day a few times before: August 11, when charity bike ride Obliteride used the bridge, and a couple days in May 2016 when a similar Viaduct closure left folks looking for other ways to get around.

OK, sure, the weather Monday was great. But that alone can’t explain the jump. More people biked across the lower West Seattle Bridge Monday than any June, July or August day ever recorded other than Obliteride. That’s incredible, and neighborhood group West Seattle Bike Connections deserves a lot of credit for all their work to help their neighbors learn how to navigate their way around the Viaduct closure even in the winter.

WSBC has not only distributed information to neighbors looking for help getting on a bike, they also lead a couple SurviveRealign99 weekend rides where they invited interested neighbors on a slow group ride from the Junction to downtown and back. This allowed people to learn the route in the comfort of a group and get their questions answered by folks who are familiar with navigating the industrial streets and trails that separate West Seattle and Duwamish Valley from the city center.

So, other neighborhoods, are you taking notes? It’s not too late to get organized like WSBC and help your neighbors get around in winter by bike.

Though the West Seattle increase really stands out, bike counts across town were way up Monday. As Seattle Traffic Engineer Dongho Chang posted, counts were up 191 percent on the Elliott Bay Trail and 176 percent on the Fremont Bridge compared to January Mondays in recent years:

So good work, everyone. Now let’s keep it going.

Founder and Editor of Seattle Bike Blog.
View all posts by Tom Fucoloro →
This entry was posted in news and tagged surviverealign99, west seattle bike connections. Bookmark the permalink.

14 Responses to Bike counts were way up on first day of SR 99 closure, and West Seattle neighbors deserve a ton of credit