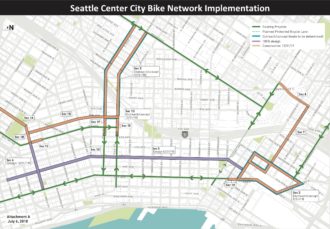 Map of routes included in the City Council resolution.

The Seattle City Council unanimously approved a resolution Monday calling on SDOT to complete a connected bike network downtown by the end of 2019.

As we reported previously, the network includes sections of 8th Ave, 9th Ave N, Pike and/or Pine St, 12th Ave S, King St, and a south downtown pathway between 2nd Ave and the International District. The resolution is non-binding, but a unanimous Council vote should mean something.

Councilmember Teresa Mosqueda took the opportunity Monday to not just support the resolution, but to give a wide-ranging speech framing a safe bike network as a necessity. Mosqueda’s speech is a master class in how safe streets and access to biking is about public health and about environmental, racial and gender justice. It’s seven and a half minutes of some of the best safe streets leadership I’ve seen from my years covering transportation at Seattle City Hall. Enjoy and be inspired (watch the full meeting here):

Mosqueda’s speech was in support of a unanimously-approved amendment (PDF) she proposed that bolstered the equity focus of the resolution. But it felt like the groundwork for a much further reaching effort to get SDOT to invest in underserved neighborhoods the department continues to neglect as it builds out sections of the Bicycle Master Plan.

The ideas in her speech would also be a valuable framework for Mayor Jenny Durkan’s SDOT Director search.

While Mosqueda may have stolen the show, the resolution came out of hard work by Seattle Neighborhood Greenways, Cascade Bicycle Club and Councilmember Mike O’Brien’s office. They worked with SDOT to come up with a list of projects and a timeline that, while a little ambitious, is absolutely achievable so long as the department and Mayor’s Office give the projects the energy and political backing they need.

Back in 2014, SDOT successfully took the 2nd Ave bike lane from idea to constructed in six months, which is pretty much light speed for such a significant downtown transportation project. That bike lane tripled ridership on 2nd Ave and formed the backbone of what was supposed to be a soon-to-follow downtown bike network. SDOT has triple that amount of time to complete these sections by the resolution’s deadline. So yes, it will certainly be hard work, but we know SDOT can do it.

The success of private bike share opens the downtown bike lanes to vastly more users because now people across the region don’t need to bike their personal bikes from their homes in order to take advantage of the new investments. As new connections are completed, more and more destinations will be within an easy and comfortable bike ride from major transit hubs. Bike share and bike lanes work together to improve access to transit and take stress off downtown streets. The bike network cannot come fast enough.