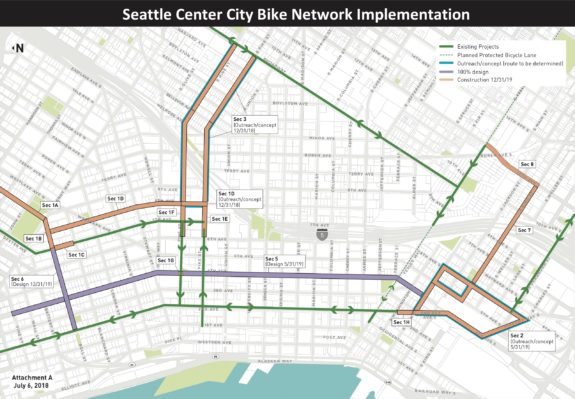 Map of the planned downtown bike network. Routes included in the City Council resolution are highlighted in peach.

The downtown bike network has been significantly delayed so far under Mayor Jenny Durkan’s administration, but there is hope to turn things around and get major pieces of the network constructed in 2019.

Some of the projects would be pushed ahead of schedule, though the 4th Ave bike lane planned for this year will remain delayed. But if SDOT can deliver the proposed set of projects by the end of 2019, downtown would become accessible by bike to many more neighborhoods at a time of serious traffic and transit constraints.

The text of the City Council resolution calls for completion of these segments “by no later than December 31, 2019.” So SDOT could deliver segments much earlier than that if the department puts its heart into the work and gets the political support to make it happen.

Where construction activity limits the ability to install permanent bike lanes, the resolution calls on SDOT to “make every good faith effort to establish “all ages and abilities” temporary connections.”

Thanks to incredible community advocacy in support of the Basic Bike Network, we are on the cusp of a major win: the Seattle City Council Transportation Committee is considering legislation requiring the construction of three critical connections by the end of 2019, but we need your support!

Show up at noon on Wednesday, July 18, at Seattle City Hall, and ask the Council to vote for the #BasicBikeNetwork. We will have snacks and signs, or feel free to bring your own.

Can’t make it? Send an email voicing your support.

This is a huge milestone, and an important moment to underscore – yet again – that #wecantwait for the Basic Bike Network. We need to send a resounding message to council to encourage a unanimous yes vote. Council must hold SDOT accountable to build a safe, connected downtown network by 2019.

Investments in 7th and 2nd avenues have transformed those busy commercial streets into some of the most pleasant places to be downtown – whether you’re on a bike or not. Why? Because the improvements included additional investments, including sidewalk upgrades, new lighting, and extensive investments for transit and motor vehicles.

But the two bikeways, along with the cost-effective short segment on Pike/Pine that city crews quickly delivered in late 2017, remain islands in an increasingly complex urban street environment. The result? Numbers of people biking downtown are increasing, but not at the rate our sister cities, like Vancouver BC, experienced when they prioritized building a connected network.

Prioritizing connections between the existing downtown network to surrounding routes to the south, north and east, will help the city realize the shangri-la…meaningful mode-shift towards biking – at a time when we need it most… when car congestion is at its worst.