New Pike/Pine bike lanes give a taste of their potential, but have been cut too short 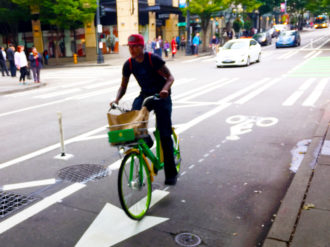 For four glorious blocks between 2nd and 6th Avenues, Seattle’s new bike lane on Pike Street is a strong demonstration of how a connected network of bike lanes would dramatically increase the comfort and appeal of biking downtown. You can now bike from Pioneer Square to Westlake Park and major retail destinations along 5th Ave entirely within bike lanes separated from car traffic. The left-side bike lane, where it exists, is comfortable and intuitive to use, and major bus routes still maintain priority on the right side of the street.

And as the Urbanist points out, the biggest winner from the project might be people on foot, who are put in fewer situations where they are trying to cross busy streets while someone driving is trying to turn.

And SDOT designed and constructed it quickly using low-cost materials. It went from idea to reality in less than a year, which is light speed for city transportation projects.

The four good blocks of the new Pike Street show off a vision of downtown streets that prioritizes biking, walking and transit — modes that need space to grow in order to absorb the city and region’s steady growth — while still maintaining access for people driving and making deliveries. This is what it looks like when the city redesigns our existing streets to be safer and more efficient.

The problem is that the redesign ends before making a useful bike connection. So until it is extended to at least 8th Ave (preferably all the way to Broadway), it will remain only a demonstration of the future potential of a bike network. Until then, people are dumped out into mixed traffic halfway between 6th and 7th Avenues, and left to find their way through downtown traffic like before. 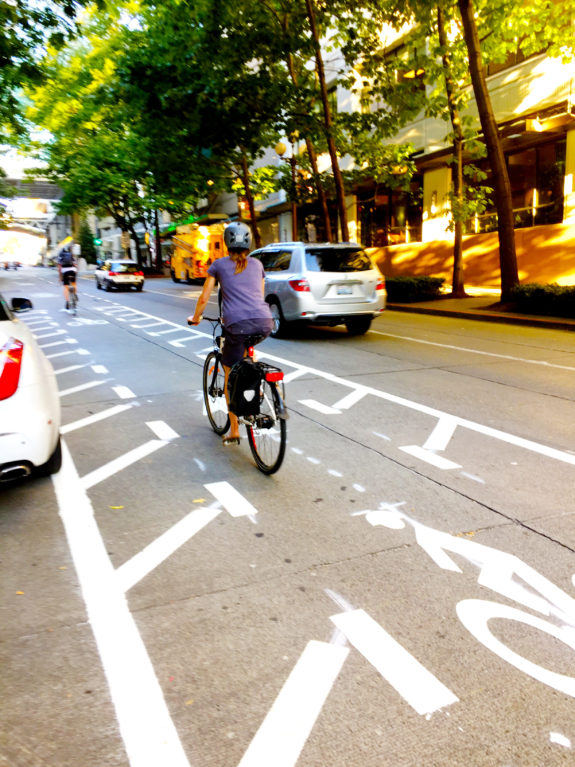 And without a truly-protected bike lane, it’s all too easy for people driving to disregard the rules:

Pine Street, on the other hand, is muddier. Intended to be the westbound complement to eastbound Pike Street, the Pine Street plans were cut back even further after the city received complaints from the Grand Hyatt. So rather than starting the lane at 8th Ave, as originally planned, it now begins halfway between 7th and 6th Avenues. After a block and a half separated from car traffic, the bike lane disappears for a block, then appears again for a block, then disappears again due to a construction project.

Here’s a comparrison of the plan as of earlier this month and the bike lane on the ground today:

The result is that, for many people, the few sections of the new Pine Street bike lane don’t really provide enough value to justify merging across several lanes of mixed traffic to get there. Often, there simply isn’t a convenient break in traffic to make the merge. Merging across multiple mixed-traffic lanes just isn’t a reasonable way to expect people to access a protected bike lane.

This was a worry we voiced when plans were announced, and cutting the bike lane back further has only made this problem more significant. As a result, many people biking down Pine simply stay in the right lane, where the existing bike lane dumps them just west of Boren. For many people comfortable navigating mixed traffic (which, because we don’t have a complete downtown bike network, is most people), staying in the right lane is still the path of least resistance.

Where Pike Street has a good connection from the 2nd Ave bike lane, there is no bike lane connection to the Pine Street bike lane. At least for the moment, most of the new lane is sort of orphaned off to the wrong side of the street.

There’s also the problem of how to deal with the brick-paved section through Westlake. While the bricks are supposed to create something of an undefined, slower-speed mixed traffic space between 5th and 4th Avenues, the right “lane” through the block is nearly always occupied by backed-up cars trying to turn right on 4th. So any buses or people driving who want to continue straight have to merge left. Unfortunately, that’s also where people biking are directed after crossing at the new bike signal at 5th Ave.

I’m not sure it is dangerous, since traffic is generally moving slower there, but it isn’t very comfortable and it’s certainly not a solution for people of all ages and abilities, the standard the city should be striving to achieve.

The current state of Pine Street and the abrupt end of the Pike Street bike lane just aren’t enough for what this vital connection needs. The city still needs to do more work to get these streets to a logical stopping point as interim bike routes. They were cut back too far to complete any connections, and missing sections on Pine don’t fix the major challenges to biking there comfortably.

Fixing Pike Street is the easy part: Extend it to 8th Ave. 8th Ave is both a bike route through the Denny Triangle and a way to access the pre-existing Pine Street bike lane up Capitol Hill. There is space on Pike Street for one general purpose travel lane, one bus lane and one protected bike lane between 2nd and 8th. The sections of Pike west of 6th are great demonstrations of how this can work. Continue that for two more blocks.

Fixing Pine Street is more difficult. The biggest challenge is how to connect from a right-hand bike lane to a left-hand bike lane. There are a lot of options, but none of them are cheap and easy slam dunk solutions.

One option is to just keep the bike lane on the right side. That would require construction of bus islands, which could have the added benefit of opening up more sidewalk space. But it also means added costs, design work and construction time.

Another option would be a protected intersection designed to make it comfortable and safe to cross to the left side of the street without needing to merge. We suggested that Melrose Ave could be a good location for such an intersection. Cities around the world and the nation have been building protected intersections for years, but Seattle has yet to try it.

Another option is to turn Pike and Pine into one-way streets between Broadway and 1st Ave, then the bike lanes would just be on the left side of each street the whole way. But one-way streets on Capitol Hill could be terrible for traffic safety, particularly for people on foot. Such a plan would need to be very aggressive about traffic calming in order to work for the neighborhood. It would also need a lot more funding and design time.

Yet another option (perhaps the easiest in the short-term) is to turn the Pike Street bike lane into a two-way bikeway like on 2nd Ave and extend it to 8th Ave. I have already noticed many people biking the wrong way down the Pike Street lane. So maybe we should just make that behavior official and safe, at least while we figure out a more long-term solution for Pine. However, removing the Pine Street bike lane without being absolutely sure there isn’t a way to improve it could make it harder to add it back later, so that’s a worry.

There may also be options to build a two-way bikeway on Pine Street from 2nd Ave to Melrose Ave (at least). Or two-way bike lanes on both Pike and Pine (my favorite option, of course).

Any solution on Pine will need significant changes to the brick section between 5th and 4th Avenues. This might include changing curb bulbs and/or creating a barrier of some kind to separate a bike lane from general purpose traffic. There may be a low-cost solution (a barrier of planter boxes?), but I’m not certain.

Or perhaps an easier solution is to ban cars entirely from the brick area, opening it to buses and people walking and biking. Allow people to cross anywhere and put up “Do Not Enter (Except Buses and Bicycles)” signs at 5th Ave. This would likely speed up buses, would better connect the two open sections of Westlake Park, and create a more comfortable bike connection.

Or maybe the best solution hasn’t even been mentioned here (let us know your ideas below).

The point is that the city still needs to do more work on these streets, and we need it sooner than later. Either fast track the next phase of the Pike/Pine bike lanes or make some quick fixes to make the current lanes more useful in the interim. Or do both. But the current project has not yet gone far enough.

SDOT staff deserves credit for the work that was done well, and I am very happy to see the city taking quick action to fill a bike route need using low-cost materials. But the final product has been cut back so far that it fails to successfully demonstrate the vision of a complete downtown bike network. The 2014 2nd Ave pilot bike lane connected Pioneer Square to Pike Place Market, and it was a huge success. If this Pike/Pine pilot made a full connection between 2nd and 8th, it would have connected to Capitol Hill and routes to and through the Denny Triangle. But instead it does neither.

If anything, it unfortunately sends the message that the city is willing to cut back bike lanes in favor of extra mixed traffic lanes whenever it is easier to do so. The result is that nobody is particularly happy. People who hate bike lanes hate these bike lanes, too, while people who bike are left scratching their heads at the disappearing-reappearing lane on Pine. The new lane on Pike might appeal to someone who does not feel comfortable biking in mixed traffic downtown, but they’re going to be let down four blocks later when the bike lane disappears with no other bike lanes in sight.

The four good blocks of Pike Street demonstrate how the whole project should function from 2nd to 8th Avenues. If the city is going to build the downtown bike network, then let’s actually do it. Go the full distance needed to complete a connection. Solve a mobility problem. Give people who already bike a reason to celebrate, and give people who don’t bike a reason to give it a try.

7 Responses to New Pike/Pine bike lanes give a taste of their potential, but have been cut too short