From a recent project mailer (PDF)

Pike and Pine Streets downtown are among the biggest missing bike connections downtown, and the city wants to take action to make them safer and more comfortable by the end of the year.

Like with 2nd Ave in 2014, SDOT staff have been moving quickly to get the Pike/Pine bike lanes planned, designed and ready for construction. And even though the planned lanes are far from perfect, they should be a big improvement over the status quo.

For the first time since it was constructed in 2014, the 2nd Ave bike lane will actually connect to another protected bike lane.

Pike and Pine are already heavily used by people biking despite having no bike lanes downtown. The geography of downtown all but requires these streets to be major bike streets because they are the first east-west streets in the northern end of the downtown core that are both relatively flat and do not dead-end into I-5. No street between Pike and Jackson fits this description.

But Pike and Pine don’t just provide a vital east-west role downtown, they are also the best connections between downtown and the city’s densest residential areas on Capitol Hill and First Hill. It’s hard to over-stress how vital safe and connected bike lanes on Pike and Pine are to Seattle’s bikeability. Few bike lane projects in the city could have as big an impact as this.

The 2017 project bites off the most difficult chunks of the Pike/Pine connection, including links to the 2nd Ave bike lane (and Pike Place Market) and through the heart of the downtown retail core. The bike lanes will be on the left-hand side of each one-way street (Pike eastbound, Pine westbound) to keep the right-hand side for bus lanes. Turning conflicts should be eliminated either by new restrictions on motor vehicle left turns or through new bike signals to separate the biking and turning phases.

Work on the new connections is set to begin in September and should come online around the same time as the under-construction 2nd Ave bike lane extension through Belltown to Seattle Center, which should open in the autumn. Some key pieces of the Basic Bike Network are coming together.

The Pike/Pine bike lanes do have some issues. Mostly, they just don’t go far enough. The near-term goal should be to connect at least to Broadway, if not to 12th Ave or even Madison. But at the very least, the bike lanes need to connect to 8th Ave, which is where an existing painted bike lane on Pine Street heads up to Capitol Hill. The city also has near-term plans for bike connections on 7th and 8th Avenues that will connect through the Denny Triangle to major bike routes headed north.

So it is certainly disappointing to see the Pike Street bike lane end at 6th Ave, turning into a short painted bike lane and then sharrows. When the project was presented to the August meeting of the Bicycle Advisory Board, the lane was supposed to connect to 8th, and sharrows were not discussed. The two blocks between 6th and 8th are uphill and busy, and 6th Ave is not a good bike connection as it is today. So ending the lane at 6th means these two blocks will form a nasty missing link until the city finishes the job.

But SDOT staff say major work outside the scope of this project would be needed to complete the connection to 8th and beyond, including work to change curb bulbs and maybe even push back the curb line near the convention center. Displacing a general traffic lane would have a big impact on car traffic, they said. And left turns to 7th Ave need to be preserved, staff said. This means the bike lane will end into a de facto left turn lane, so people biking will often need to merge right to get around the back-up of turning cars.

Almost connecting isn’t good enough. Compromising the bike lane like this means it won’t get the use it could, and forcing people biking to mix with car traffic at a fairly busy and potentially scary uphill stretch is not going to be inviting to many more people than those already biking. A bike network is only as good as its weakest link. And these two blocks of Pike will be pretty uncomfortable.

Pine Street has different issues. The primary problem is that people biking downhill on Pine will have to somehow make it from the right side of the street, where a painted bike lane exists east of Melrose, to the new left side bike lane west of 8th Ave. Merging left across multiple lanes of mixed traffic is not comfortable or welcoming to new users. So like the Pike Street plans, the Pine Street lane will not have a complete and comfortable connection on its west end.

The solution likely needs to start further east, perhaps at Boren or Melrose. Maybe this is an opportunity to also fix the awful situation at the Boren stoplight where people biking westbound have to squeeze between lanes to get around the back-up of right-turning traffic:

Just go to Pine and Boren if you want to see who SDOT prioritizes. 0 space for bikes, 0 signal phasing for pedestrians. No fix til 2020. pic.twitter.com/Ufn7xDrrlO

Maybe SDOT could speed up a fix here by creating a two-way bike lane on the south side of Pine between Melrose and 8th Ave. That would create a good connection for people connecting from Melrose (where bike lanes are planned as part of the Melrose Promenade project), and it would set up people biking westbound to be on the correct side of the street. In fact, if the two-way bike lane extended to 7th Ave, that would create a better connection to the planned bike lane there and could provide people biking uphill from downtown with a better option compared to the planned sharrows on Pike Street between 7th and 8th that we discussed above (biking from 2nd Ave, you could turn left on 7th for a block, then right on Pine).

The trick would be designing a high-quality transition at Melrose, which is itself a problem intersection for people biking westbound as it is today. Perhaps this is a good chance to pilot a modified protected intersection using paint and posts. Below is a very rough sketch I just mocked up. The other lanes would shift around, of course, and the existing downhill bike lane west of Melrose would likely go away. I’m just sketching the new bike lane part so you get a rough idea of what I’m suggesting. I’m sure there are other good options, too. 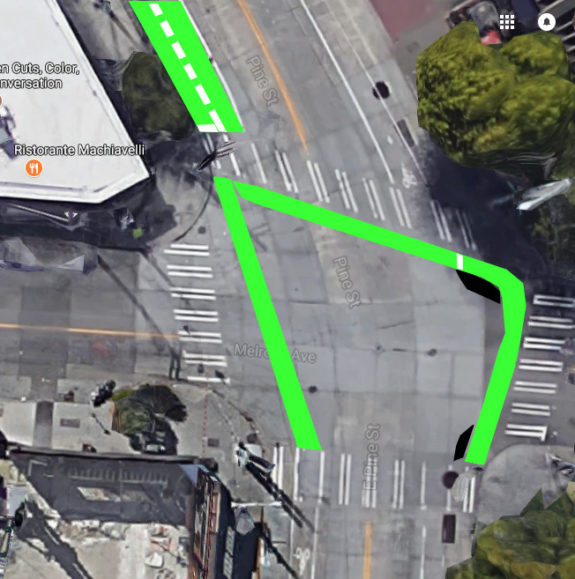 None if these are as good as compete bike lanes to Broadway, of course, but it could be a good interim option.

The other potential issue with the Pine Street lane is that the section with brick pavers between 4th and 5th Avenues (through Westlake) will not have a bike lane. People biking and turning left at 5th Ave will have new separate signals. So people biking will have an open path to enter the brick-paved area when the bike signal turns green. But people biking won’t have a separated lane until crossing 4th Ave. The brick area is supposed to be a slow-moving mixed traffic area, anyway. But the city will need to monitor how this solution works in practice to make sure it is comfortable for people biking.

In the end, the fact that SDOT is moving to build the downtown blocks of Pike/Pine bike lanes in 2017 is very exciting. The shortcomings are disappointing, sure, but the downtown bike network is getting closer and closer.

Founder and Editor of Seattle Bike Blog.
View all posts by Tom Fucoloro →
This entry was posted in news and tagged basic bike network, downtown, pike/pine, sdot. Bookmark the permalink.